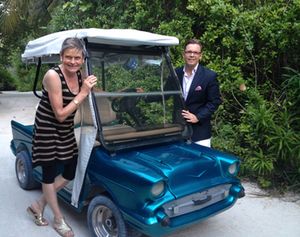 Some years ago a resort near Kuala Lumpur had a Proton ‘stretch’ limo, all scarlet outside and white leather and fur inside. But this, the personal buggy of Mark Hehir, GM of the luxury One&Only Reethi Rah in Kaafu Atoll, Maldives, takes the award for style. He had it bespoken, if that is the word, somewhere in the great US of A and this is what he picked the gal up in, after the 50-minute hotel yacht ride from Male. That yacht, too, deserves an award for style. Monarch 56 is its name, sleeps four, has a crew of four, is gleaming white, with the silver One&Only logo outside, and inside it is unvarnished pine, and mushroom leather. Onboard WiFi works perfectly, of course. 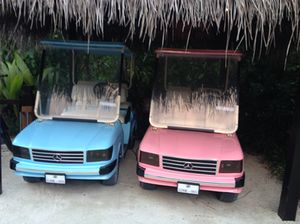 His and hers ‘Mercedes’ buggies

Perhaps Mark Hehir got three for the price of two when he bought his buggy. This baby pink ‘Mercedes’ and its baby blue brother are for the exclusive use of those lucky enough to stay in the resort’s Grand Sunset Suite. For your money, you also get a total area of 21,000 sq ft, of which 4,300 is interior, for the three bedrooms and their accoutrements and the like. Others staying in the 130-room resort can, incidentally, rent buggies, but they are black, characterless. I made do with my bike, another black beauty with oodles of character – it has a big Keep Left sign on the handlebars. Note to those coming to the Maldives, some resorts, like this one, and the two Four Seasons, are on ‘island time’, an hour ahead of ‘Male time’, and some resorts drive on the right, and some, like this, on the left. 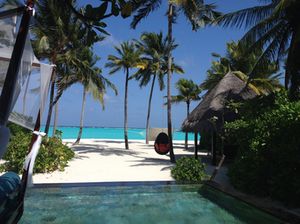 View from villa 142, over its pool

Villa 142 is one of the handiest on this starfish-shaped island, though honeymooners seem to like the over-water villas, set in quartets off the spikes of the starfish. The villas are Jean-Michel Gathy at his evoke-Thailand best. Outside, wood and glass walls rise to steeply-pitched roofs thatched with young coconut palm. Inside, the roof becomes a soaring cathedral-type wood ceiling, rising to 21 feet, supported by 24 guard-of-honour bamboo poles set alternately one, or a pair, all tied to each other with marine-type rope binding. The interior area of the villa is semi-divided by 15-ft high side dividers so I have living area, then bedroom area, then bathroom area. But of course the Maldives is all about the outside, and I look out at my marvellous pool, a L-shape with a vitality bed, with water jets, set into the L’s stumpy leg. 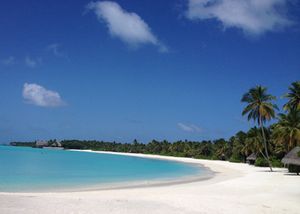 Just one of the beaches

The traveller to the Maldives quickly gets used to private pools, and nothing but the best when it comes to beaches. This is why, Mark Hehir tells me, that regulars who come here – and 45 percent of people do come back, again and again, and at Christmas and New Year, when there is a minimum ten-night stay, they book three years ahead, and he has a waitlist, already, of 150 names for Christmas 2014 – these regulars know the exact layout of their pool and its private path to their favourite beach (there are 12 beaches here, forming four miles total around the island). Presumably some spend hours and hours on the beaches but, for me, there is so much else to do. 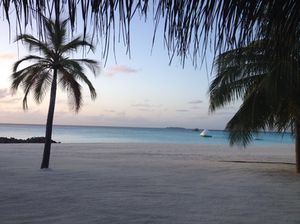 View from the treadmill

Take the gym, or rather its view. Yes, this is looking out from the gym. It does not open until seven but I mentioned to someone, who happened to be its manager, how it would be SO nice to get in half an hour earlier. Of course, he said, I will be here, and he was. There are over 840 living-and-working on this island, exclusively looking after hotel guests, and they all seem to take a personal interest in making sure that every one of those guests has what he, or she, wants. Mark Hehir has brought James Duigan and his Bodyism personal training as an extra, to the gym – Mark Hehir does two marathons a year, works out twice daily, and he came across Bodyism at Bulgari Hotel London, which is where he always stays when he is in London. 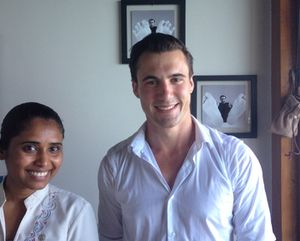 Manicure queen and pedicure king (Bastien Gonzalez, in photos behind)

What else is there to do at this luxury resort? No-one could ever get bored here. David Beckham and his family are among those regular Christmas-New Year guests and all four Beckham boys kick a few balls around on the resort’s Astroturf football pitch, much to the delight of all the staff (perhaps Victoria Beckham, today’s most realistic and true-style fashion designer, gets some ideas from the stunning gear in the resort’s Neo boutique). Myself? I got an idea of heaven in the spa, having simultaneous manicure from a charming Mauritian and a pedicure from a stunning Parisian at the Bastien Gonzalez studio, oh boy…… and now for some food.