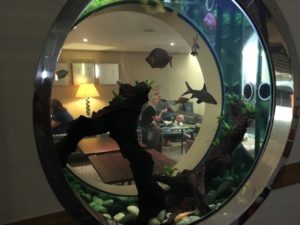 Looking into the club lounge

The more one travels, the more essential airport hotels, those actually connected to a terminal, become. As long as there is efficient inter-terminal connection, that terminal does not have to be the one that you are flying in or out of. At both London’s Gatwick and Heathrow airports, for instance, the gal’s second homes are Hiltons. At Heathrow, the thoughtful-luxury Hilton Terminal Four is connected to the relevant terminal (Five) by bus, subway tube, or Heathrow Express. At Gatwick, the massive (821-room) Hilton is a five-minute interior walk to South Terminal, which then requires a further ten minutes for the EasyJet-sponsored shuttle to North Terminal. But, good news, British Airways moves its entire Gatwick operation, come January 2017, to the South Terminal, which will make life even easier. 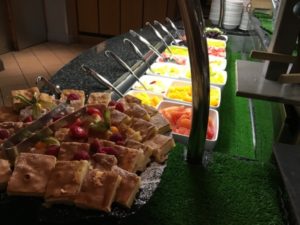 At any airport hotel a good club lounge is essential. Gatwick Hilton’s lounge is admittedly not perhaps as easily accessed as some – it is up on the top, fourth, floor, at the far end of the massive building, but it is well worth the hike. The space is light and bright, and the staff are absolutely charming – one girl has been here for eight years, which shows how happy she is. The knowledgeable do try to avoid the lounge during the later part of the daily cocktail hour as happy holiday-makers tend, not surprisingly, to take it over (business travellers who want a quick beer or glass of wine do better to pop in the moment the complimentary bar starts, at 6.30 p.m.). 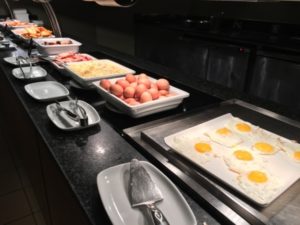 .. where eggs are all ready

I, at least, need a gym that is accessible 24/7, and Gatwick Hilton’s, with Precor equipment and a Pilates ball, suffices just fine, especially since I use the prominent fire stairs rather than elevators to get down to the first floor, where it is set just off the main lobby. My favourite rooms, by the way, are in the ’74—’ numbers, seven for the wing, near the club lounge, and four because fourth floor is where the lounge is. The rooms are well thought out, with everything, including US as well as UK sockets and a space in the otherwise-automatic minibar for your own things, say medicines. I do remember, however, to take body lotion, to complement the other Peter Thomas Roth toiletries provided. 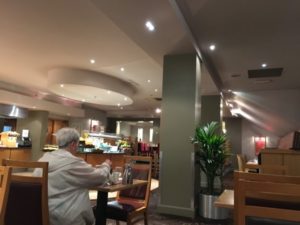 .. in a spacious restaurant

Few club lounges actually open early enough for first flights of the day – on this occasion I had  a 6.50 am departure, and this luxury hotel’s lounge opens at six. No problem, the hotel has thought of every eventuality. The Garden Restaurant was fully open and ready to go at 5.30 am, with smiling servers, good strong coffee, splendidly healthy buffet counters (Müller Vitality yoghurts, lots of fruit), and I quickly made flavourful wholewheat toast on the rotary grill, to go with stylish Croxton Manor butters, Bonne Maman. Cleverly, they had individual fried eggs already. I has settled my bill last night, before going to bed, and now I was in and out in 12 minutes total, and I easily made my plane.  SEE MORE OF THE BUFFET, BELOW