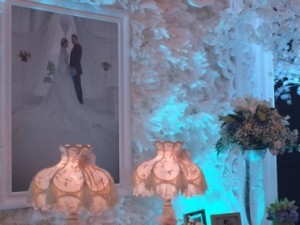 Corner of one wedding party venue

Indonesian weddings are big affairs and all Jakarta‘s luxury hotels are in on the act – and the six month-old Raffles Jakarta is no exception. Last night it had a wedding that went on until 1 a.m., after which the event’s party planners took their Tiffany chairs and other paraphernalia away as other planners started work on tonight’s two weddings, setting up the massive ballroom, of course divided into two. As day dawns, women among the invited guests will start having their hair done, elaborately coiffed to go with the tight corsets that nearly all of them must wear to get into dresses that are coloured according to the wedding invitation. Tonight, one wedding, for a seated dinner, specifies spring green and pink. The other wedding, a more usual stand-up happening, is purple. At least people then know if they are going to the right wedding, says the gal. 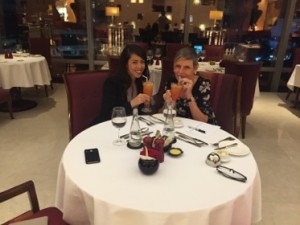 Wedding set-ups cost around $80,000 and include photo venues. Add to this the cost of food (no alcohol). At tonight’s typical stand-only party, a red carpet walkway is laid in this section of the ballroom. An hour before, guests are waiting in line. At opening time they process in along the carpet, up four flimsy stairs to the stage, where bride, in European-style white, and groom and parents sit in regal chairs. Guests go past, pay respects, descend stairs the other side of the stage and head straight for chafing dishes groaning with food. This is heavy eating time, for a lot of people. My new friend Désirée Bonau was briefly a wedding planner back in Frankfurt and she says she hardly dares say that there an event for 100 was big. Here, a couple of thousand guests is commonplace. 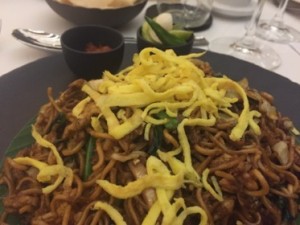 I am going Jakarta tonight, in Raffles Jakarta’s Arts Café. We both start with the hotel’s signature Jakarta Sling, the hotel’s variant on its Singapore sibling’s Singapore Sling. Here the sling is North Sumatran passion fruit, star anise, Galliano, Grenadine, apple sour liqueur, sweet Vermouth and dry gin. I go on to my favourite Indonesian dish, Bakmi goreng, a plate of noodles, chicken, prawn, bok choy and egg. A group of young ladies totters, on highest heels, into the restaurant, all in black with scarlet flashing-light ‘ears’ on top of their heads: it is a hen party, and next week’s bride is recognisable by her short white veil (wonder if they have been shopping first? Like all modern Jakarta hotels, it seems, there is a first-class multi-storey mall connected to the hotel, accessed right outside Arts Café). 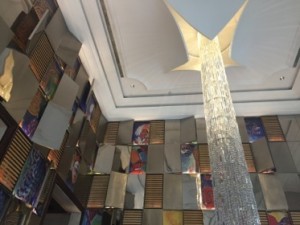 ‘Rain’ falls from a ‘broken’ ceiling

This luxury hotel might be related, brand-wise, to its exact-contemporary Fairmont Jakarta, and both have interiors by Hirsch Bedner, but they could not be more different. This one is owned by magnate Candra Ciputra, a fanatical collector of statement art by the late Hendra Gunawan, 1918-1983. Massive tiled recreations of his work (Gauguin meets Munch, with stylised banyan trees, sea and fish) soar 25 feet up the lobby, and by the 14th floor outside pool, garden and jogging track. The lobby lounge is Gunawan in Singapore. The artists’ preoccupation with the sea is shown by a Czech chandelier falling down from a broken ceiling to a carpet that looks like water, with fish. Walls are entire panels of Gunawan, half-hidden behind Singapore shutters. Gunawan is everywhere, in bedrooms – wall panels, and suitably multi-coloured rugs on champagne-coloured marble flooring. There are single-colour Gunawan sculptures in the lovely garden. My outstanding yoga session with Lin, for instance, was to a background a vivid orange Gunawan likeness of women with exaggerated hands and feet and, in the rear, a 50-foot green shape (like Singapore‘s Esplanade) that will be Raffles Jakarta‘s own theatre, opening, at second stage, along with its spa and more restaurants. I look for a book on Gunawan in my personal library, which is extremely well chosen – I have Raffles and the Golden Opportunity, by Victoria Glendinning; Tenun: Handwoven textiles of Indonesia; The 20th Century Batik Masterpieces, Tumbu Ramelan Collections, and 25 Tropical Houses in Indonesia, Amir Sidharta.  That should keep me more than busy.