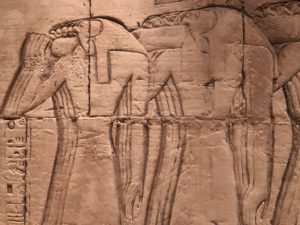 Wall sculpture, given by President Nasser in 1959

Looking across the Nile from a suite in the super-luxury Nile Ritz-Carlton, the gal watched the sun set over El Mohandiseen, beyond the Cairo Tower – see photo above – and it felt as if nothing had changed, but everything had become more finely tuned and stylish.  Ground-floor boutique offerings include really desirable dreamy robes, for ladies, from YMZ, and colourful casual gear for men, from Mobaco. Thanks to one of two kinds of postcards in desk drawers, culture-seekers now know, for instance, that the two Pharaonic wall sculptures in the lobby of the 440-room hotel are copies of originals at Aswan: they were a gift from President Nasser to celebrate the opening of the hotel in 1959. (Hilton’s contract expired December 28th, 2008, and it was rumoured that Starwood offered the Government $14 million to turn it into a Westin, but Ritz-Carlton won, with a $15 million bid.) 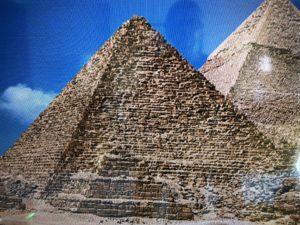 As seen on television

I know where I am, not only because of scenic views of the Nile from suite 910’s bedroom and salon – see a video below. Big wall-set televisions are frequently showing shots of the Pyramids, a reminder that the ‘Pyramid hotel’, Mena House, is now Marriott. The suite is really comfortable, with stylish turquoise leather accessories – see a video below – and room valets were quick as lightning (gym lift? I will show you). A malfunctioning room key was replaced in under five minutes. I was delighted to find pristine copies of both the Financial Times and New York Times in the 12th floor Club lounge. There were also, I suppose, GCC publications among the Arabic reading material; summer-long, this is a favourite vacation spot for Arabic speakers, especially from Saudi Arabia; yesterday and tomorrow, a GCC events organiser has rented the main ballroom for local concerts, 1,200-strong audiences both occasions. Tonight I see a bride, in full western white – engaged girls and their mothers tend to book the post-ceremony wedding party at least six months out, typically invite 400-500 (sometimes double that) but fortunately share, with the groom’s family, the considerable cost of a party that starts around 9 p.m. and may include not only basic drinks but Champagne and a full range of cocktails. 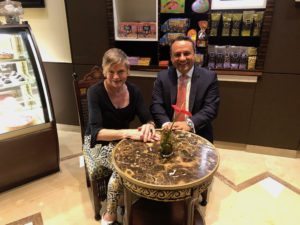 When GM Joe Ghayad, whom I had last met when he opened Ritz-Carlton Almaty, arrived here, he immediately used some of the creative and money-making flair he must have inherited from his Lebanese father, a renowned film director who took his three kids to some of the world’s best hotels.  Joe Ghayad quickly turned part of the lobby into Sweet Boutique, a patisserie with outstanding Illy coffee. He has also introduced wellness into dining options for both guests and his 1,000 staff, who sometimes find buffet dishes labelled with the number of minutes required to work off, say, a typical kenafeh, an Arabic sweet that looks like shredded wheat soaked liberally in honey syrup (he also invites any staff member who is available to bike with him on Fridays, when Corniche El Nil and the other roads around are not quite so crowded). 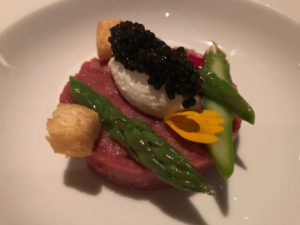 The copious buffet serving stations at Culina fortunately have no such calorie reminders – a video below shows the range of Arab dishes, from hommus through to kenafeh.  I sat outside on the terrace, which has an eight-foot, diagonal measurement, wall screen showing football real time (I was fortunately able to get CNN on a LifeFitness elliptical in the 24/7 gym, which has all-wall windows looking over the Nile). Lunch was a tasting of Arabic appetizers followed by a lamb tajine from a shiny copper cauldron, a far cry from last night’s dinner. This luxury hotel, like all Cairo hostelries it seems, has an Italian, Vivo, and I coincided with German guest chef Oliver Glowig, who as well as his eponymous two-star Ristorante Oliver Glowig in Rome, seems to consult regularly for Ritz-Carltons in Bahrain and Tokyo.  As practice for the gastronomic extravaganza he is preparing for tomorrow night’s first party, at Nile Ritz-Carlton for the stylish hotel’s 50 top loyalists, he sent out beef tartare topped with Beluga (I followed this with simplicity-in-Italian colours, plain spaghetti al dente, cooked cherry tomatoes, and grilled asparagus). And I thought once again that luxury benefits from a sense of place. We drank Cape Bay Special Oaky Edition Cabernet Sauvignon Merlot 2017 from Al Ahram Beverages, established 1897. Later I found out that Al Ahram is now part of the mighty Heineken empire. AND NOW SEE SUITE 910 AND THE LUNCH BUFFET