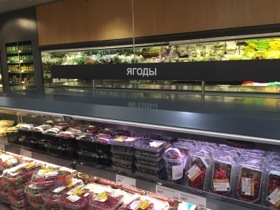 Fruit display, including berries, in the St Petersburg Stockmann

Those in the west, and elsewhere, reading accounts of food shortages in Russia’s luxury hotels need to face reality. At least in major cities there are no shortages at all, although, says the gal, prices have gone up about 15 percent, and since the ruble has fallen to such an extent that the US dollar now goes twice as far, food for Russians is expensive. But sanctions do not affect alcohol, and there is wine-aplenty, and for those who can afford it, there is Scottish salmon and French cheese, both brought in via, and re-packaged in, Belarus. In St Petersburg it is worth heading for Stockmann, Finland’s department store on Nevsky Prospekt. Apart from signage it looks as inviting as any Whole Foods back in the US, and there is everything here, even Driscoll’s berries. 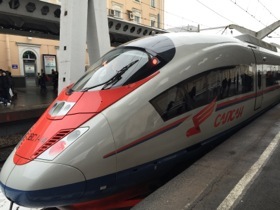 I was driven by a former policeman who is now official driver at the beautiful Four Seasons Hotel Lion Palace St Petersburg (this job is much more fun, he said). At Moskovsky Station – yes, it is confusing, since I am in St Petersburg – everyone, everything, goes through security. I have a minder but I do not need one. It is all very well signposted. The eight-carriage train – a Sapsan, Siemens Velaro RUS – noses into the station and I am standing under the sign One, because my e-ticket says carriage (one) and seat number. At 1.25 announcements, in Russian and then in English, say that in five minutes the train will be leaving. At 1.29 further announcements say it is about to leave. At 1.30 p.m. precisely it leaves. 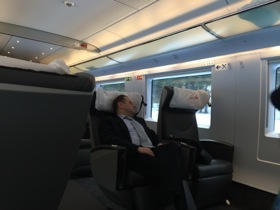 And I know exactly what time it is all the way as there are front-of-carriage and overhead monitors, giving the time, and also the next station. As soon as we take off our stewardess, dedicated to this one – first class – coach comes by, first with newspapers (unfortunately all in Russian) and then with thick-paper cloths for the sizeable tables that spring up out of one seat arm – the television video springs out of the other arm. She offers drinks, alcohol, coffee, anything, and then she brings a full, illustrated menu. I seem to have a choice of about 30 dishes, all included in the price, but I am busy working. Yes, each seat has a European socket. There is WiFi but I cannot make it work. 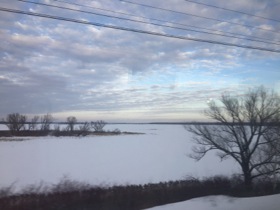 Like everyone else, at some point I put the seat into the fully-flat position and yes, it does go absolutely horizontal. I still have at least three clear feet of floor between my toes and the head of the person in front of me. The landscape rushes past at over  200 kilometres per hour. In order we are going, north to south, through Tosno, Lyuban, Chudovo, Malaya Vishera, Luka, Okuloka, Bologoye, Vyshny Volochyok, Kalashnikovo, Likhoslavi, Tver, Redkino and Klin. 403 miles after leaving St Petersburg we arrived at Moscow’s Leningradsky station, exactly on the stated dot, at 5.40 p.m. and the driver, and a minder, from my next luxury hotel, Four Seasons Moscow, are waiting, at the exact spot. Do not, dear reader, ever think of flying between St Petersburg and Moscow. The centre-city to centre-city railway is the only way to go.