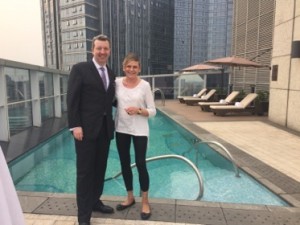 Want a wow? Take a Presidential Suite that has its own private rooftop pool – and one that is big enough for proper swimming. As far as the gal knows, there are only three luxury hotels in Asia that have such a facility – Grand Hyatt Tokyo, InterContinental Hong Kong, or St Regis Chengdu. Look at the latter’s outstanding pool. After the hotel’s October 2014 opening it is no wonder it was immediately booked by some of China’s richest, so they could party with friends. 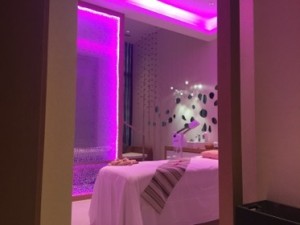 There are so many sensational wow features in this 279-room hotel. Take its Iridium Spa. You can either travel by elevator or take 53 gently-curving stone steps around a 30-foot-high crystal-fall chandelier, to treatment rooms that glow like nightclub booths (once there, do not miss having a Ba Yan Kala organic treatment, ideally by the divine spa director, Arunika Ekawati from Surabaya). The big indoor main pool also has psychedelic lights on its ceiling. 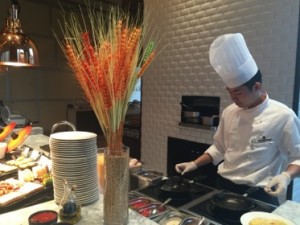 But, as in all the best hotels, it is service rather than design that makes true memories. In the aptly-named Social restaurant, the breakfast chef produced a perfect omelette while his serving colleagues asked if I wanted to sit inside or out. Local Sichuan people, it seems, like sitting outside, even in the middle of winter, so even upper-floor restaurants (Social is on the fourth floor of the 29-floor tower) have terraces. Some tall high-rises with otherwise unrelieved vertical facets have tiny protrusions, just big enough to hold one chair. 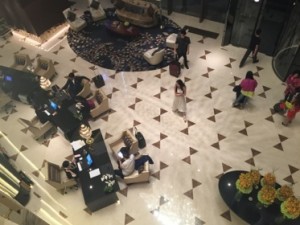 With hotel stays in Chengdu city-centre hotels being under two nights, on average, there is constant coming and going. I look down into the hotel’s marbled lobby, designed by Di Leonardo, and see an L.S. Lowry-like image of guests arriving, guests departing. At the seated desks, hotel ladies elegantly dressed, with pearl necklaces, cope with all the flurry. Yes, they have to be elegant – with five Cartier stores within ten minutes’ walk, and every other brand you can think of too, this area of Qingyang District rivals Beverly Hills‘ Rodeo Drive or London‘s Bond Street. 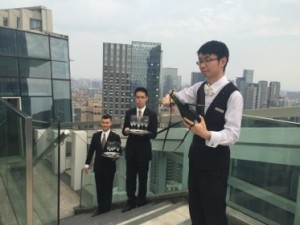 Leo and the Moët

Among the 350 people who work here is one ultra-talented drinks specialist, Leo – yes, he is a mixologist but more. He shows his skills at a sabre session, effortlessly slicing off the Moët‘s neck with a Laguiole not-sharp sabre knife. He has sensibly put a string on the bottle’s cork, by the way, to prevent it flying away and causing damage. He is extremely versatile, this young man. Later he demonstrates making a Chuan Mary. As I know all St Regis hotels have their own version of a Bloody Mary, and here it is a Chuan Mary, Chuan being short for Sichuan, the province of which Chengdu is capital. 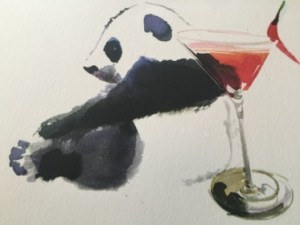 What IS a Chuan Mary? Start with 120ml of fresh-made juice of cherry tomatoes, add 30ml vodka, a gram of Sichuan pepper powder, 3ml green Tabasco, 3ml Sichuan sweet soy sauce, and shake with style. Garnish the rim of a martini glass with sea salt and Sichuan pepper, and decorate the filled glass with bits of confit chili and bamboo shoot. After that, it was time to go to this luxury hotel’s Chinese Yan Ting restaurant, to one of its private rooms where a tree pattern on a wood wall extends down and on to the carpet (the six restaurants are all designed by SSD). Of course our private room had an outside terrace but, not being local, we sat inside.