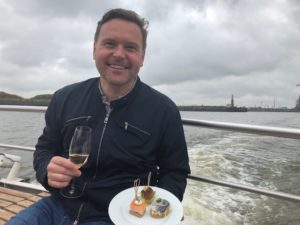 Hamburg’s architectural logo – its Statue of Liberty, Eiffel Tower or Sydney Opera House – is Elbphilharmonie (see above), the concert hall complex, designed by Herzog & de Meuron which opened January 2017 at a final cost of apparently €870 million, four times its estimate. Already famed for its stunning shape and superlative acoustics, it undoubtedly brings masses of visitors, especially Germans, plus Dutch and Swiss, to Hamburg.  Its main drawback is the seeming impossibility of getting tickets. Even concierges of luxury hotels are stymied, so who IS controlling the supply?  The gal got excited when Songkick advertised tickets on line but, on further digging, no, no tickets are currently available but try again for Jacob Karlzon, scheduled for November 18th, 2018. 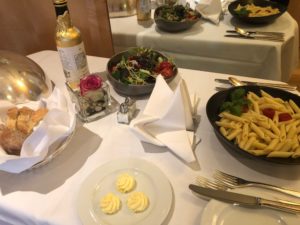 There is so much else to do in Hamburg. Hubert Neubacher, an Austrian who has lived here so many years he is, almost, accepted as a Hamburger, owns and runs Barkassen-Meyer, which has nine boats doing Elbe river tours. These are ideal for wedding and function parties, and for general sightseeing – every great city, as I know from Amsterdam and St Petersburg, looks so different from the water.  On a 36-passenger boat with really knowledgeable English-speaking guide Klaus, I learned about Hamburg’s old buildings and new container business. Neubacher dropped me right back at the landing dock of Steigenberger Hotel Hamburg, a stalwart that is really handy not only for river trips, and having direct access to the S-bahn, but for such essentials as faultless WiFi and quick-simple room service, and lovely helpful staff. 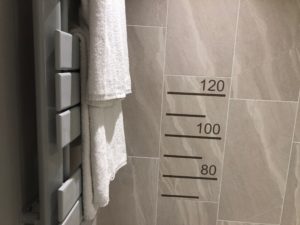 Martime wall-markers in the shower

In fact all 233 rooms of this clever hotel were full tonight, with a conference – usually, it is heavy on German and German-speaking business, with couples and families driving in, especially to enjoy all that Hamburg has to offer (yes, it has masses of other shows, including The Lion King, so who worries that they cannot get tickets to the ‘Elphi’?).  The city also, sadly, has far too many loutish tourists, especially stag and hen night groups from UK, and Hubert Neubacher, who heads Hamburg’s travel association SKAL is already worried about over-tourism. Anyway, the Steigenberger, which, like a beautiful woman belies her age (it opened in 1993) is about to get a face-lift.  I loved the mock-up room. JOI, designers who are based in Frankfurt, will be turning nondescript pale apricot bedrooms into statements of greys, and I loved such accents as height indicators in new rooms’ showers. 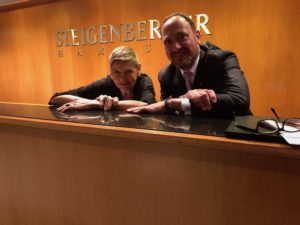 Moritz Klein, whom I last saw in Frankfurt, has been in charge of this highly successful hotel since December 2017.  He is fully aware that some of Steigenberger Hotel Hamburg’s loyal supporters might not all approve of the new-look – these, I suspect, are the type of lovely locals whom I saw having afternoon tea in the BAF, Bistro am Fleet, conservatory (take a normal size cake and cut it not into 12 or eight portions but, here, into six)..  BAF does jolly good food, just like room service.  I thoroughly enjoyed my wiener schnitzel, with a side order of sautéed spinach, while Moritz Klein’s fries, to go with his beef tartare main course, looked so good I had an order too.  To be honest I cannot say I enjoyed my eventual departure, but I appreciated it – 4.30am personalised wakeup, the gym open, the espresso machine worked first time and the Egyptian night manager said the car was waiting.  He smiled just as genuinely as his daytime colleagues had. NOW JOIN THE BOAT TRIP, AND THEN SEE SUITE 708