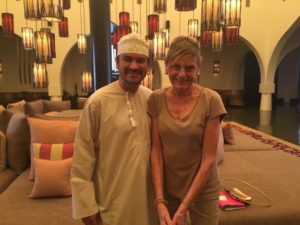 Now it is time for Oman’s capital, Muscat, and where better for the gal to stay than The Chedi, that luxury hotel that still looks as pristine and beautiful as it did when it opened on the Al Khuwair coast in 2003? First it was lunch with the far-sighted owner, Pankaj Khimji. For six years this true lover of luxury had planned and put the resort together, getting the lease on the land, and financing, and a management agreement with GHM, led by Hans Jenni and Adrian Zecha, who had introduced him to Jean-Michel Gathy who designed it, and so on, and so forth. But Pankaj Khimji never stands still. He realised that wellness would become even bigger business, and in 2010 the resort added a 315-foot pool, the longest in the Middle East (see an end shot of it, above) and, parallel to it, an extension of the inside wellness area. 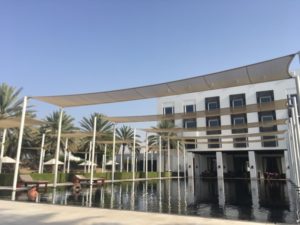 The building houses the spa, which now has 12 rooms – and almost as many products, ranging from Aromatica through to Voya. It also has one of the most luxurious gyms. Latest pieces of Technogym are separated by fretwood screens, not so much for privacy as overall ambience. But this is the kind of thoughtful place where ambience and feng shui are naturally omnipresent. The main pool, for instance, has sail-like awnings overhead to give the shade that is so welcome when the temperature soars to over 40, as it is right now. Similarly, just as at The Setai, Miami – which also opened as a GHM hotel – around the pool are fences, here in the form of meticulously-trimmed hedges, that thoughtfully break lounging areas into more-compact, more private, spaces. 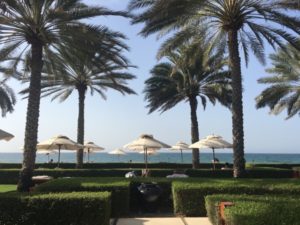 Looking to the beach

I would not mind having shares in the white paint used here in this 158-room beauty: some of the 305 staff members, of whom 60% are local, must be painting nonstop. Every building is white, apart from wood doors. Rooms range from those in the three-floor main block to single, and two-floor, freestanding villas. I was downstairs, in 1004, a 640 sq ft Club Suite, which has the calm of The Setai, or Bangkok’s Sukhothai in days past: I looked out to the beach, and across acres of manicured lawn and decorative pools. Think Versailles. There are no coloured flowers growing hers. It is lawn-grass and beach-grasses, natural stone, and white. For a colour fix, head for the main lobby, with its yellow tented ceiling and hanging yellow and orange lamps, or eat – the choices range from Japanese pool-side and outdoors through to local Omani seafood mixed grills in The Restaurant, designed by SPIN’s Yasuhiro Koichi. 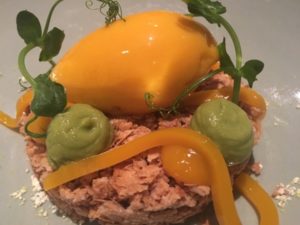 Colour was certainly the finale of dinner outdoors at The Beach House. Tuna carpaccio Niçoise, followed by shary, also known as long-faced emperor, led to an amazing mango sorbet with mascarpone and lime guacamole, all on a bed – I was told – of white chocolate crumble. Our conversation was certainly colourful, too. Morton Johnston, long-time GM here, started out as a Harrods manager (his training included wines, which perhaps helped him choose two Clos Henri wines, from Marlborough, tonight). Jump forward a few years and he thought he was going to open a hotel in South Korea, and only found out at the last moment that it was actually the Ananti golf resort in North Korea, catering to the 3,500 members of Emerson Pacific’s golf club there. But then, he said with a wry face, the shooting of some tourists in July 2008 meant immediate evacuation of his entire team, and apparently the Ananti has been mothballed ever since.