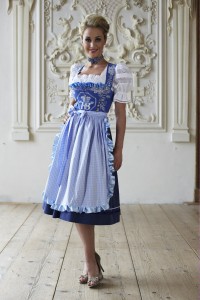 Until October 7th, 2012, any self-respecting Münchner – one of the 1.3 million who live in Munich – will be sporting national dress – for Oktoberfest.

Men go all the way to full lederhosen suede shorts with suspenders (braces).  Women wear anything from full-length traditional dirndls to short dirndl-type smocks over leggings.  There are key designers, including Julia Trentini and Schatzi.  The gal, who not being from Munich did not dare wear the dirndl she last wore to the Vienna Hunters’ Ball, was in ‘normal’ gear.

This weekend, Italians are in town for a special Italian Oktoberfest (they have brought their police with them).  Armani, anyone? 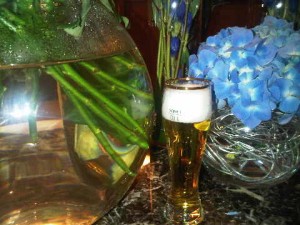 Check-in at the Mandarin Oriental, and you are offered a glass of Oktoberfest beer

The 2012 Oktoberfest, which started September 22nd, is the reason for this burst of local pride. Every luxury hotel in town is full, some at prices that are twice their norm. They go all out to make you feel special.

Check-in to the Mandarin Oriental Munich, and as well as scrumptious flowers on the counter in front of you there are somewhat small beer glasses, and you are offered a welcome of the specially potent Oktoberfest beer.  Behind you, a table has four different beers: Augustiner, Hacker-Pschorr, Lowenthal and Paulaner, for tasting. 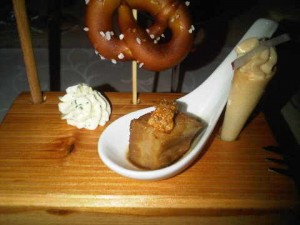 Upstairs, in the Mezzanine gallery, is Mark’s Restaurant, named after the son of Georg Rafael, the legendary and much-loved hotelier who opened this hotel in 1990.  You enter via big aboriginal-type wall paintings, slapped-on mud by Rafael’s friend Richard Long.

Tonight, in the restaurant, chef Simon Lareses sent out a Bavarian tasting as an ‘amuse’. A solid block of wood held, from left to right, a bit of roasted chicken skin, a dollop of pure cream infused with herbs, a baby pretzel on a stick, one-bite of pork belly and a miniscule wafer holding obazter, a local speciality which is, wait for it, half-half cream cheese and butter. 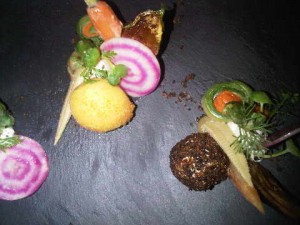 A trio of Valencay cheese presentations

Those staying in the 73-room hotel can at least repair to its new Technogym, open 24 hours and really stylish, with a Jacob Jensen clock on the wall. But back to dinner (no not DINNER, that is the divine restaurant in another Mandarin Oriental hotel…).

I had already said no to chef’s three- or six-course menu.  I started my two-course dinner with what I thought would be a salad. In fact, the ‘vegetable garden with Valencay’ turned out to be three presentations of Valencay cheese artfully displayed on a slate. Valencay appeared in a macaroon, it appeared fried, it appeared rolled in nuts. 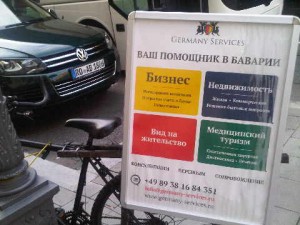 Russians love Munich - this sign is at the corner of Marshallstr and Maximilianstr.

On October 23rd, 2012, the Mandarin Oriental opens its annual winter-time wood chalet, right on its rooftop. It holds a maximum of 60, serves Bavarian food, beer, wine and Dom Pérignon.  I think the Russians will love it.

There are tons of Russians in town year-round – several of the dirndls and lederhosen around the Maximilianstrasse area are being worn by Russians (when I complained that two ‘Bavarians’ walked straight into me on the pavement, I was told ‘oh, they are Russians’). 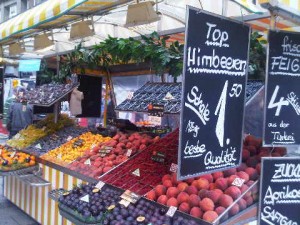 At any time, there are beers and pretzels - or healthy options

Oktoberfest is the time for eating and drinking.  My friend Kostanza spent yesterday at the fairground.  For nine hours she and a friend moved from one area to another, drinking a bit here, eating a bit there (you can actually take your food in but you must buy the beer).

She says she met so many interesting people, as tables are communal.  You can eat anywhere in town.   Kostanza says the best Sunday brunches are at Café Reitschule and Käfer – I bet they are among the best in the world.  I love the fruit stalls set variously around town. 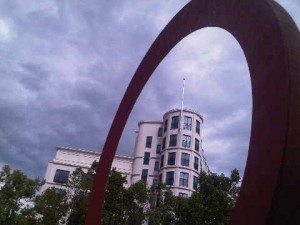 Walking around Munich is a joy, along the cleaned-up banks of the river Isar, along Maximilianstrasse and through Maximilansplatz (I am absorbing a max of Max).  I walk west to the Charles Hotel, a jewel in Sir Rocco Forte’s crown that stands on the site of former Maximilian University buildings.

From here, many of the 132 bedrooms look out over the Alte Botanischer Garten.  I head through to Davvero, ‘perfection’, the Italian restaurant that flows out on to the pavement sidewalk.  The restaurant manager demonstrates a two-foot long glass pipette that he uses to measure Ue Nonino grappa, and urged me to taste.  Sorry, not at this time of day. 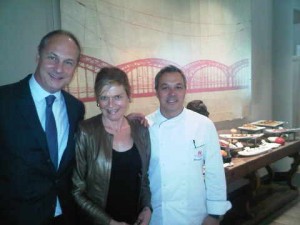 At The Charles, GM Frank Heller and his chef, Giovanni Rosso, in front of the pumpkin buffet..

Frank Heller, the GM of this luxury hotel, was not wearing leather trousers but his grey suit did have a loden-green collar, and the jacket had matching green stitching.  He rushed into the kitchen to bring out chef Giovanni Russo, beaming with pride at his latest lunch buffet.

Brilliantly, what was formerly just a conventional, though special, antipasti buffet has now been themed.  Every two weeks the subject changes.  Last sequence was a tastings of asparagus.  Next sequence will be mushrooms.  As luck would have it, this session is pumpkin. 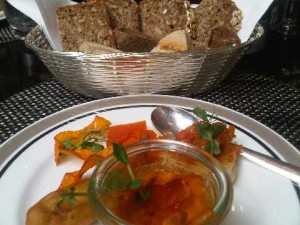 .. a plate of pumpkin goodies, including the eulogistic brûlée

The display, beautifully labeled, was sensational, and educational, showing that different kinds of pumpkin, and its relatives butternut squash and many more, can be paired with smoked salmon, stuffed in courgette bits, put on top of goat’s cheese, served in sweet and sour cubes.

My absolute favourite, and one of the orgasmic foods of all time, was the pumpkin crème brûlée.  Oh wow, what can a gal say?