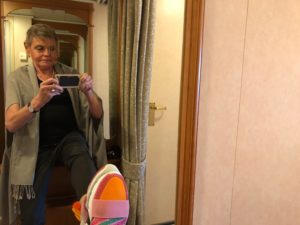 Every now and then a day at sea allows luxury travellers to catch up – yes, you landlubbers, you do not necessarily believe it but there is a lot of routine at sea, and a lot of things require personal housekeeping, or at least attention. The gal has a routine when on a Regent Seven Seas ship. Up at around six, walk the decks, get coffee from the excellent WMF machines, outside on deck ten or, in, the warm, in deck six’s Coffee Corner. Pick up a terrifically hard Mensa quiz as well as a sometimes-hard sudoku. Get ready for breakfast. And so the day continues, perhaps with talks, or a Pilates workout that reminds participants they are not nearly as lithe as the professional dancers onboard. Before you know it, it’s time for lunch, and if the weather permits there could be an amazing ice carving, as shown above, on the poolside buffet. 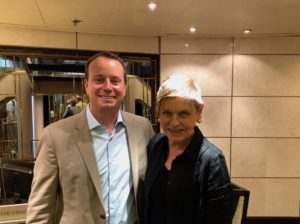 There might be an early evening cocktail, with the dancers moonlighting as hosts – it is noticeable that not only are they obviously hired for versatility and conversational skills but for their sartorial aptitude. They all dress exquisitely, a trend set from the very top. Interestingly, Seven Seas Navigator was seen off in New York, only a week ago, by Jason Montague, Regent Seven Seas’ President and CEO. I am amazed to hear that he quickly donned a chic three-piece suit – surely Brioni or Zegna? – to fly to Ancona. Why? He was joining RSSC’s SVP Hotel Ops Franco Semeraro; Robin Lindsay, EVP Vessel Ops of parent company Norwegian Cruise Line Holdings Ltd, and Giovanni Stecconi, Shipyard Director of Fincantieri Shipyards, in laying the keel for the next RSSC baby, Seven Seas Splendor. To bring good fortune, the keel will forever bear an Ancient Roman Empire Coin, 117-138 A.D., featuring Neptune, God of the Sea; a 1700s Spanish Gold Escudo, and a 2018 coin etched with the date June 28th, 2018. 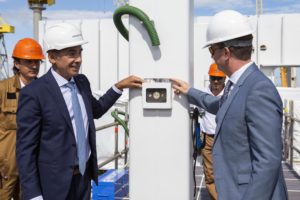 Regular cruisers cannot wait for the new ship and its first two sailings, in early 2020, are completely sold out.  In the bar one night, as Jose from Lisbon makes his perfect G&Ts, I meet a charming German guy who lives in Texas and an American-born woman. Both, separately, have spent over 2,000 nights aboard Regent Seven Seas ships.  I talk to one of my Trivia quiz team members and he admits that about the only place he has not yet been to is Easter Island (in my own small way, feeling humble among such globalists, I switch one already-booked cruise from Sydney to Manaus for the simple reason that the Amazon is still on my bucket-list, as are the Canaries, and yes, they are now booked, too). 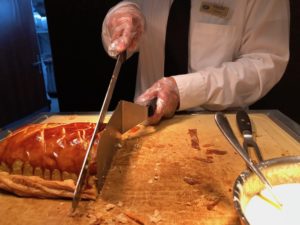 Coulibiac carved to order, at a lunch buffet

So talking geography takes up part of a day at sea. Add working out in the Technogym or having a Canyon Ranch treatment and possibly socialising in the launderette and the hours fly by. And what is on the menu for lunch today – anything in pastry is particularly delicious, as are the fries, a big plate just by themselves. Interestingly onboard etiquette is definitely apparent in such a high-quality luxury ship. Passengers acknowledge each other as they pass, as do crew, and if anyone dare take away today’s copies of The New York Times from the excellent library, they seem to be returned, if somewhat sheepishly.  It is noticeable, by the way, that no-one ever pinches the tacky Daily Mail.