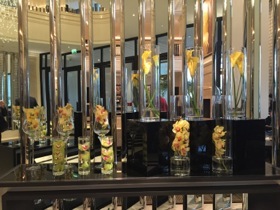 Can flowers be art? Yes they can, at so many hotels. The gal saw her tree of orchids at Four Seasons Lion Palace St Petersburg, and now, merely a hop, skip and a jump of a train ride away, look at Moscow‘s newest luxury hotel, Four Seasons Moscow. The flowers nestle into the setting and décor so magnificently it is difficult to know which came first, the flowers or the ambience or the architecture. The architect of this 1930s building, by the way, was Alexei Shchusev, who also did Lenin‘s mausoleum – he was apparently condemned by Frank Lloyd Wright for this design, although it is hard to know why. 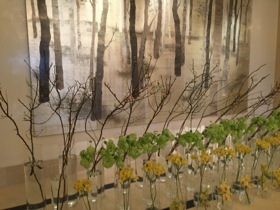 .. and here, in front of a suitable painting…

Outside, the 16-floor building is solid, structural, functional, a cream god at the north-east corner of Moscow’s famous Red Square. Yes, it opens right on to the square, and the main entrance, in what is called Okhotny Ryad St, is actually in the otherwise pedestrians-only Red Square. But it has now, at least on floors up to the tenth, been turned into an absolutely magnificent 180-room hotel, with interiors by Richmond International, and flowers by the marvellously-named Vincenzo d’Ascanio, yes, the same genius whose work I encountered in St Petersburg, and whom I hope to see again in Italy, at Four Seasons in Florence and Milan, and at Belmond Ciprani in Venice. 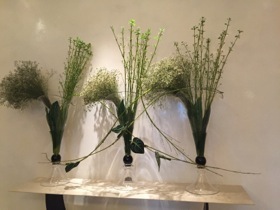 .. and here, simply against a white wall

The flowers here are totally sensational, in military groups set next to suitable art works, perfectly complementing the champagne walls, with dark wood highlights, that typify the interiors throughout. This is, in the main, quintessential Art Deco. About the only exceptions to this stark simplicity are some of the uniforms, black Capri pants for some of the women, and the bellmen all sport bright scarlet bomber-jackets, a sock-it-to-you reminder that Red Square is just outside, right where brides, in full white, love to have commemorative photos taken (the flamboyant boss of this place, Max Musto, said he wanted a sky-high female doorman, also in red, but apparently all those Natalia Vodianova model types were otherwise engaged). 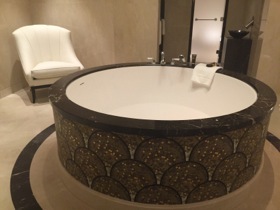 No flowers, but tiniest tiles, form the surround to this seven-foot bathtub

But there are some exceptions, notably in the Pozharsky Presidential Sute, all 5,300 sq ft of it. Look at the tub in the master bathroom! Its surround is formed of tiny tiny tiles. Nothing was too much trouble in compiling this suite, with its three bedrooms, its three – and one half – bathrooms, and a grand piano, and, guess what, divine Roberto Cavelli toiletries, specially for the hotel, of course. And, to add the finishing touch, Pozharsky, on the seventh floor, has a terrace the size of a tennis court, which most of the year allows you to host a cocktail here at this luxury hotel for at least 50 friends, looking down at Red Square immediately below…. but until winter truly ends, the terrace is full of snow….