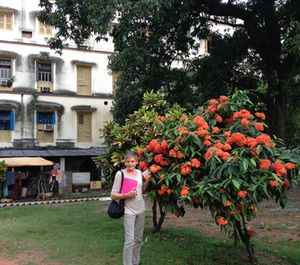 In the garden outside St John’s Cathedal..

Well what a change from the standard luxury hotels for the gal.  First she tries a much-loved family hotel in Brittany and then, whoosh and as if by magic, here she is in the gardens of St John’s Cathedral in Kolkata (Calcutta). The trees bloom unabashed by the surrounding everyday life of some of the official 18 million population, to which apparently another four million inbound commuters and hangers-on should be added. This has been an important centre for centuries and amazingly Armenian traders were here before the Brits arrived – there are now only about 250 but they are pretty wealthy and their foundation educates less-fortunate Armenians the world over. 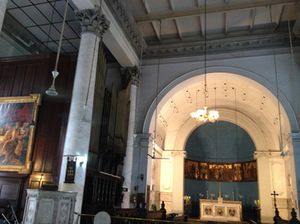 .. and inside, the Last Supper to the left

Under its East India Company masters and later as part of the British Raj, Calcutta was capital of India until 1911.  Of course it had to have a cathedral.  St John’s, built in 1780, was modelled on St Martin’s in the Fields in London. Among those buried here is Charlotte Stuart, wife of the Governor-General of India, Earl Canning (this is the same Canning who then went on to become Governor General and Viceroy of Singapore, ergo Singapore’s Fort Canning). A former Lady in Waiting to Queen Victoria, Lady C wrote to her Monarch that in Calcutta she was isolated to a degree she could never have imagined.  Perhaps compensated by eating her favourite ledikeni sweets – still sold throughout Bengal – but, nonetheless, having arrived fit and healthy in 1856 she died emaciated, five years later, at 44. Buried here too are hundreds of other Brits who similarly succumbed to malaria and other tropical diseases. Make it through one monsoon and you were going to die in the next one. Kipling came and called it the city of dreadful night. Mark Twain said he had been to Calcutta, and for that reason he was not going back. 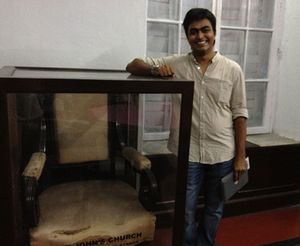 St John’s Cathedral  was the principal Protestant Cathedral until St Paul’s Cathedral came up in the 1840s. Today, it is, despite the musty decay that is oh-so-typical in this continent, still in use. A Last Supper by Johann Zoffany, 1787, hangs above the north transept wall and, yes, just as at Villa San Michele, Judas has his money purse.  In a side room is Warren Hastings’ chair, used when he was first Governor-General of Bengal, 1772-1785.  I am being shown round by honestly the best-ever walking guide I have ever come across, Ifte, real name Iftekhar Ahsan, who, with a degree in English literature, gave up running his family’s long-established Rajasthan cloth business to share his passion, travel. 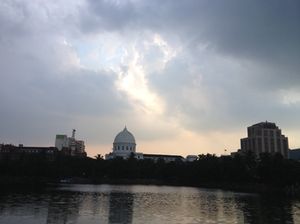 Looking across Lal Dighi lake  to the old Post Office

If you are lucky enough to book his time, he will devise a tour of length, size and interests just for you.  For me, we concentrated on the BBD Bagh Area, on the east bank of the Hooghly river.  This is the old English area of town, with a Great Eastern hotel that Lalit is going to re-open shortly.  Here is the Dead Letters Office: mail took a year to arrive from London and letters arrived long after the malaria victims had gone to heaven – letters with no living recipients were chucked in here. This was once a street named for Sir Ronald Ross 1857-1932, the Indian-born Nobel Laureate who, after experimenting on his Indian servants, realized the Anopheles mosquito, rather than tropical air (mal air) or lack of tonic with your gin, caused malaria. 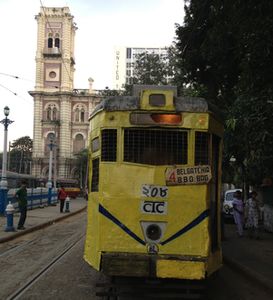 There is lots of local transport

Here is a monument to the Black Hole of Calcutta, a small dungeon in Calcutta’s old Fort William, named for William III, where in 1756 troops of the local Nawab, Siraj ud-Daulah, held British prisoners after the fort’s capture – a replacement fort, built 1781, is still used by India’s Eastern Command.  We passed old cricket and rugby clubs, still working, still with old-fashioned dress codes.  The traffic around us varied from charming trams to yellow Ambassador taxis and tuk-tuks, and even, amazingly, man-pulled rickshaws (there is also one underground line, with another in the offing). 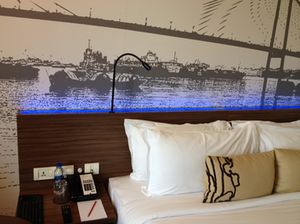 A starter room at Calcutta’s newest hotel, a signature Gateway

Calcutta is certainly making investments. Its RMJM-designed airport terminal sprung into action, metaphorically at least, this January (on May 8th, 2013, the Indian Express said ‘swanky as it looks, glass panels have frequently crumbled and fallen off, doors leading out of the airport have remained locked as staff have fumbled for the keys, leaving passengers stranded…’). Actually I think the new airport is swell, though airside air-conditioning is like an icebox. There are other lovely additions to the city.  Take the sparkling Gateway Hotel EM Bypass Kolkata, another new-luxury hotel from Taj. Taglines are value, efficiency, fun (and 24-hour rooftop gym and restaurant).  It is at Ruby Roundabout, right next to several big hospitals and IT centres and can do weddings of 500 or more.  Weddings in India are moving into hotels, I am told. Reasons? Security, traffic (who will drive two hours out to someone’s farm?) and the fact that today’s Indians simply will not go where there is no air-conditioning.  There is no air-conditioning when walking with Incredible Ifte, of course…..