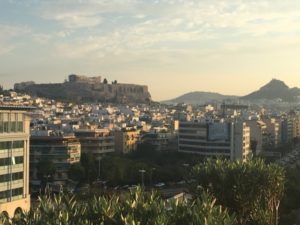 Look across at the Acropolis

Having looked yesterday at activities and food, and so much more, through the eyes of what the gal assesses to be Greece’s main luxury destination resort, now it is time to turn attention to a well-established city hotel, in the capital, Athens. The gal has known the Athenaeum InterContinental for many years: it was opened as a new-look luxury-business hotel in 1982 and its illustrious GMs since then have included Wolfgang Grimm, who after running InterContinental Sydney fled to nurture his own vineyard (he is now in Phuket), and John O’Carroll, another wine lover. Today Panos Panayotopoulos is steering the hotel through what everyone hopes is the last period of the Greek Crisis, although honestly the city today has never looked more spic and span. 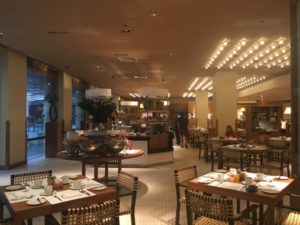 There are no graffiti along Syngrou Avenue, outside this 543-room hotel, and the streets around are spotless – and I must admit that from what I could see on the three-hour drive here from Costa Navarino, the country lanes were less littered than in, say, rural England. The hotel is full right now: it is a business-business, with theatre-style seating for up to 1,500 column-free, and no fewer than 35 break-out rooms, all hung with some of the 350 invaluable examples of modern art collected by the hotel’s owner, Dakis Joannou (above is The Blue Man, by George Lappas, 1950-2016 – it dominates the enormous honey-marble main lobby). Up in the eighth floor Club Lounge there are stylised Vogue covers by Maria Papadimitriou, and so on. Oh the Club Lounge, it is brilliant. Facilities and service-wise, it is on a par with InterCon lounges in Hong Kong, London and Sydney, all of which also have memorable views. 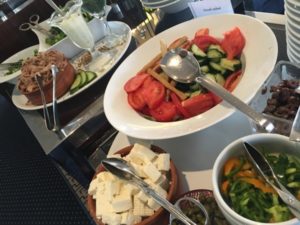 Make your own Greek salad…

But none of those other superb lounges has an outside terrace, big enough for six tables-for-four. I breakfasted out there, and the Acropolis seemed so close I wanted to stroke it (memories of staying at Amarvilas, so close to Agra’s Taj Mahal …). The lounge also has two cocktail-hour features, apparently the inspiration of Panos Panayotopoulos, that I think are brilliant. As well as a full bar, and lots of whole fruit, and the industry-wide norm of cheese board, crudités and canapés, here there both make-yourself a Greek salad, and salad Niçoise . This is such a good idea. I was in club room 804, by the way, which I was subsequently told is the favourite of ‘the owner’, though the only art was a large, say three by three feet abstract work in various shades of blue ink. 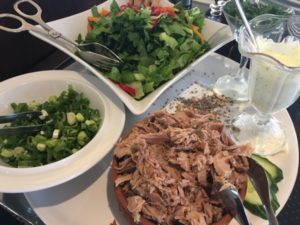 The room was certainly my favourite, only 30 yards along to the lounge, and handy for the elevators. Like an open-V, the room wrapped around its balcony, which had a table and seating for four. I could lie in bed and look across at the Acropolis, illuminated night-long. The non-automatic minibar had a clear area for ‘your own items’, which saves having to move all the cokes to put in medicines. And, perhaps because this place is mature, things like light switches are easy, and they work. Add to this the thoughtfulness of a really detailed local map with ideas from the concierge, plus another small map giving all details and a map of the free shuttle bus up to Syntagma and Parliament, and supplies that include basic office essentials, and you can see why at least 30 percent of guests are repeats (oh yes, and the Technogym is 24/7, though the pool does not open until six). NOW SEE THE VIDEO OF THE CLUB LOUNGE, BELOW