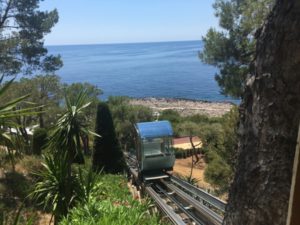 You have got to hand it to the Belgians – they have given the world frites and pâté (and a home for the EU but we will gloss over that) and it was their king Leopold II, more than a rogue when he seized the Congo, who started to make Cap-Ferrat exclusive. He owned the peninsula, but sold some of it in 1899 to a Monsieur Péretmère and the eventual result, thanks to architectural input from Gustav Eiffel, is that globally-iconic luxury hotel that is now called Grand-Hotel du Cap-Ferrat – Four Seasons. The gal had not visited in its Four Seasons glory. It has been given tender loving care, and oodles of style. The 17 acres of gardens, designed by Jean Mus, are as beautiful as ever: there is a self-drive funicular, left, to take you down to the pool, or you can walk, a total of 79 steps down from the road at the bottom of the main gardens. 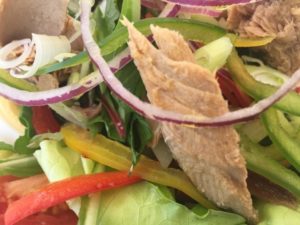 The pool has certainly provided a lounging base for all the stars who flocked to the Grand Hôtel after Georg Wilhelm Pabst’s movie Don Quixote, starring Russian bass Feodor Chaliapin, was shot here in 1933. When the hotel re-opened after the war, one of the first visitors was Pierre Gruneberg who is still, 61 years later, teaching people to swim here. Today there is a stunning casual poolside lunch venue, Club Dauphin (it will also serve dinners as of 2019). I sat at a white table, set with blue, turquoise and white striped mats, and breads in a turquoise Sonolys fabric bag, and enjoyed the definitive Niçoise salad, choosing the traditional potted tuna rather than fresh: I could have added a superfood topping to this, say chia seeds, goji, wheatgrass, or spirulina seaweed, for iron and protein, and have washed it all down with, say, a Green Mule, Russian Standard vodka with cucumber syrup, lemon, rocket and Perrier. 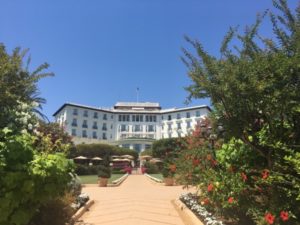 You look up to this hotel

I walked back up to the hotel, a splendid open-C shape that now has a Hobbit-like separate wellness-and-rooms building behind to give, in total, 74 rooms, all looked after by 330 employees. I was in the original building, end suite 104, and it was an absolutely gorgeous Pierre-Yves Rochon white affair, with hints of celadon colour, and fascinating copies of outline sketches by such greats as Braque and Chagall – see the video below. I headed to both the indoor gym and the outdoor gym, this in a highly-secure garden maze bordered by meticulously-manicured bushes that gave total privacy to four open-air treatment pavilions, and the gym tent (which, incidentally, they opened for me specially early the following morning). There are currently two dining choices, both indoors and now, in summer, outside, under a flat-topped canopy of Aleppo pines, remarkably hand-trimmed every two years. 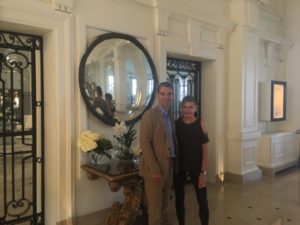 The more-casual Veranda, on the lower level of the terrace, shares live music with the upper level Le Cap, which offers finer dining from Michelin-starred chef Yoric Tièche, doing his first season here. I was with another culinary addict, GM François-Régis Simon, from Brittany: we eschewed the five-course tasting menu and went for simplicity, in my case five one-bites of Simmental fillet tartare with Sturia Oscietre from Aquitaine, and turbot with courgettes. We also turned away the Champagne trolley in favour of simple glasses of Sacha Lichine’s Whispering Angel, and then a glass of Dme Combier Crozes Hermitage 2015 (it is 100% Syrah, we know you do not like Cabernet, said one of the beautifully-groomed servers, in the stone-coloured suit that only a French hotel, with skilled tailors, would dare choose). And then the morning came, with that outdoor gym experience and, later, cycling on a white BTwin bike around to see a statue of Good (sorry, Bad) King Leopold, and I had a last look at the sheer beauty of the lobby, with its Tisserant chandelier, and Indian and Iranian marble, and oh those flowers, and then it was time to leave this memorable luxury hotel.  NOW WATCH THE VIDEO OF SUITE 104, BELOW