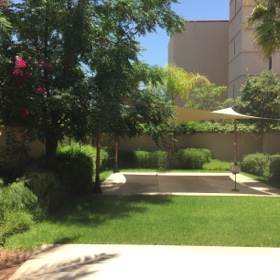 Gyms with views are dear to the gal’s heart, as you know. Ones that spring to mind include those at Park Hyatt Shanghai and Ritz-Carlton Hong Kong, for sheer height above terra firma. Just-visited Sultana Marrakech, with its view of Medina rooftops, would be listed if it, the gym, had better equipment. Any LA Fitness, as at Four Seasons San Francisco, is listed because of the sight of that locale’s fittest and wannabes working out in the latest gear. Also included, now, is Four Seasons Marrakech, because this well-equipped facility looks out at gorgeous gardens and an outdoor yoga studio. 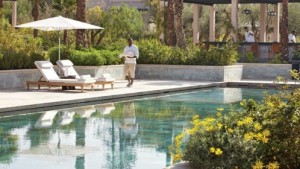 Calm around the pool

I called in for lunch, enroute between A and B, and how welcoming they all were. As an oasis from the hurly-burly of Marrakech’s motorbike-filled roads, and the myriad of shoppers weaving in and out of the medina’s soukhs, this is calm personified. A few travellers were lazing around the main pool, being looked after by eagle-eyed attendants. The open-sided restaurant at the far end of the pool is the ideal place for lunch and we-three-girls, all healthy eaters, all started with the local caprese, divine baby tomatoes and burrata that was honestly irresistible. 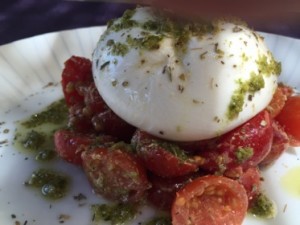 GM Felix Murillo popped in unannounced, the boss of the hotel who is as bouncy as when we last lunched, in another gorgeous garden, at Four Seasons Sultanahmet, Istanbul.  We talked about business, and how Marrakech is the Paris of the south Mediterranean, a magnet for the creative from wherever. Austrian artist-poet-singer Andre Heller, apparently, is setting up an art park here, another individual is doing a similar collective for other talents to work, and display their wares. There is something happening the whole time. 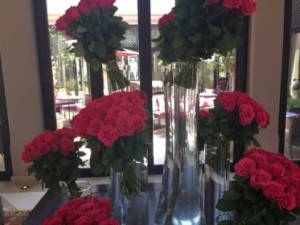 Roses in the lobby

On my way out I admired the four songbirds in an elaborate white cage (there was one, said Felix Murillo, but a mate was brought and now there are four). I wonder if the same fecundity is found in other birds in cages of luxury hotels’ lobbies, namely The Biltmore in Miami, and Rosewood London? Red roses by the birdcage here are certainly a hint of romance, and this is a hotel that has had a faire share of high-spend romance recently. This April, Malick Mikati married Reef Hashem here in Marrakech, and brought along a total of one thousand to enjoy the fun. Obviously not all could stay in this 141-room hotel, so others were sold out, too. 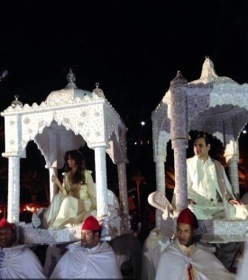 Malick Mikati is son of Lebanon‘s richest man and prime minister twice, Najib Mikati, whose wealth came from selling his telecoms company Investcom to MTN Group for a mere $5.5 billion. He could therefore finance this little do here, which saw the bride dressed in a gown by Lebanon’s best known couturier, Elie Saab, one of the guests, and the whole occasion planned by international events organiser another Lebanese, Ziad Raphael Nassar, who has had a book about his 70-plus A-list events published by Assouline (Once – the name of his company – by Ziad Raphael Nassar). 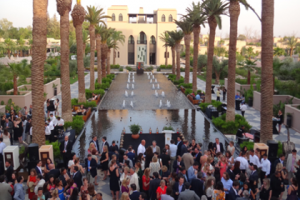 But this luxury hotel is not only about hatchings, matchings – we hope not dispatchings – but also serious business events. This was the venue of 2012’s annual FT Business of Luxury conference, in those days still organised by the irreplaceable Vanessa Friedman, now sadly decamped to the New York Times. During the period May 30 to June 1st, 2012, the hotel hosted 400 delegates who heard such speakers as Chris Blackwell, Tory Burch, Aerin Lauder, François-Henri Pinault and that great survivor Martha Stewart. There is nothing people here like better than special happenings.