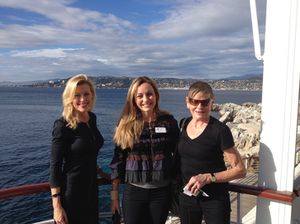 Back in Cannes for another session of International Luxury Travel Market ILTM, the ‘mother ship’ of all the marvellous ILTMs around the world.  Once again, the pre-opening media lunch is hosted by the Oetker Collection at the absolutely stunning Hotel du Cap-Eden-Roc in Antibes.  Once again, the sun shines… is it really winter here on the Riviera?  And what is more, this luxury hotel is already closed for its winter season but it has opened up specially for us.  The gal is thrilled to catch up with so many friends. 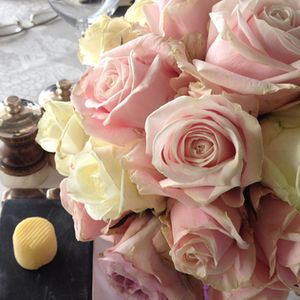 Roses on the table, and Bordier butter

The tables are set with palest pink ‘old-style roses’, the kind of colours that one imagines tea-gowns were made of back several decades to 1964 when Rudolf and Maja Oetker sailed off the coast here, and said to a friend they would like to buy that property. Years later, he was in the Caribbean when someone telexed him to say it was for sale, and he bought it, immediately. It is just so gorgeous, with 22 acres of land way above the water. We look out from our glassed-in conservatory lunch room, down at a Condé Nast Traveler lunch just below us, and, below that, the royal blue Mediterranean. 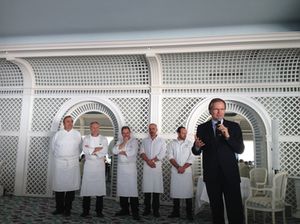 Of course there are speeches, with Oetker Collection CEO Frank Marrenbach telling us everything that Oetker Collection is up to.  The various GMs who run the hotels are introduced.  We hear that Frégate Island Private, off the Seychelles, now has 2,000 turtles.  Each of the hotels is unique, but they are all masterpieces – the tagline of the brand, as it happens.  We start our lunch, prepared by chefs from here, and by Eric Fréchon, who has three Michelin stars for his cooking at Epicure in Le Bristol in Paris.  First comes Jerusalem artichoke soup, with sautéed ‘champagne cork’ ceps, by Olivier Gaiatto, of this hotel. 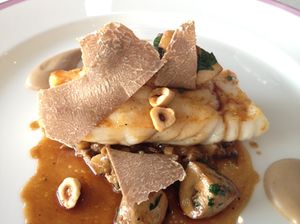 Next a crab dish, which I pass, and then Eric Fréchon’s pan-fried wild turbot with white truffle cream, Paris mushrooms and chestnuts, chicken and butter reduction. At this rate I will turn into a mushroom but it is worth it, the taste is so good. Wonder what the food was like when this was first built, by Le Figaro’s founder, Auguste de Villemessant, in 1870?  He called it Villa Soleil, imagined it as a writers’ retreat. it was not until 1887 that hotelier Antoine Sella came into the picture.  Since then it has been a hotel with only the brief time-out to serve as a military hospital for part of World War II.  During its history it has received royalty, plus Chagall and Picasso. 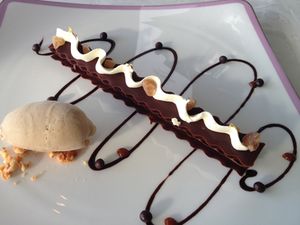 Is this art or dessert?

Finally, the dessert, an artwork by the hotel’s patissier, Lilian Bonnefoit, one-time best pastry chef in France.  Today he has done a Peruvian chocolate crunch with crystallized chestnut fragments, grilled coffee icecream.  He is used to special events.  Although it is seasonal, closed during the winter, there are continual Big Parties here. During the Cannes Film Festival, Vanity Fair throws an event with Gucci, attracting the likes of Salma Hayek and Harvey Weinstein. Paris Hilton and Sharon Stone arrived by vintage cars for a de Grisogono party this May. 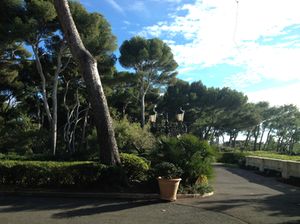 Walking back up to the car

As I walk up from our conservatory to the main building, I look around.  Honestly, this is one of the ten best luxury hotels.  The people carrier is ready, and a Hungarian drives us back to earth, so to speak, for these next few days of ILTM. And the hotel can go back to sleep, for a winter hibernation right through to April 18th, 2014.