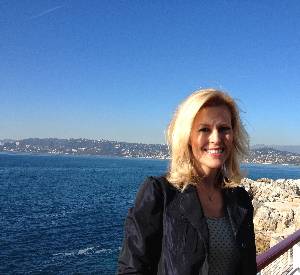 The sun shone week-long during ILTM in Cannes and everyone was smiling as a result.  Tiffany Dowd is top luxury travel blogger in the USA – the gal met her on a little electric boat chugging around the inland waterways at one of Mexico’s top luxury resorts, Fairmont Mayakoba, during a sister-ILTM, ILTM Americas.

Here she is again, Tiffany in France.  It looks as if she is standing on one of the decks of her private yacht but actually she is at Hotel du Cap-Eden-Roc in Antibes.

This is an Oetker Collection hotel, and the CEO of the group, the stylish Frank Marrenbach, hosted lunch there for the top journalists invited to ILTM (actually they missed out on some of the top global writers, who were taking part in Peter Bates’ leaders lunch at the same time. 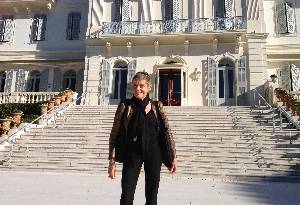 So here we were, at the white palace, Hotel du Cap-Eden-Roc, said by Colin Firth’s wife Livia to be her favourite hotel in the world (‘it has somehow hung on to the glamour that the Cannes Film Festival used to have.

These days, the festival is jammed and chaotic but back at the hotel, you suddenly feel like Grace Kelly’).  You do, you walk through the main house and down its rear steps and you feel ten-feet tall, ten-million-a-year stuff, if not more.

I have not yet stayed here.  Until seven years ago you had to pay cash but now, says Philippe Perd who runs the 121-room beauty, credit cards are taken like everywhere else.

He and the other GMs of hotels in the Oetker Collection were there at the lunch, hosted by Marrenbach, who talked about Palais Namaskar, Marrakech, opened this year, and about Hotel Saint-Barth Isle de France, in St-Barth’s, which it has taken over.  He also announced a forthcoming winter-only resort in Courchevel. 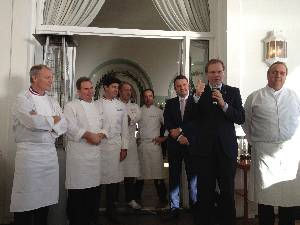 Lunch was cooked by the hotels’ chefs, who in typical style came out to take a bow.  It is always amazing how professionals can come out front and there is not a stain on their whites. Ask a home cook to come out and take a bow and he/she is either deliberately wearing a black apron or a white apron that is now covered with spots.

Anyway, here we have the professional line up of Paul Stradner, chef of Brenner’s Park, Baden-Baden; Eric Fréchon, who has three Michelin Stars at Le Bristol, Paris; Antoine Perray, from Palais Namaskar; Yannick Franques, Châteaux St-Martin & Spa in nearby Vence, and the host hotel’s culinarian, Arnaud Poëtte – who, like other Hotel du Cap-Eden-Roc professionals, had come in specially since the hotel is currently closed for the winter season. 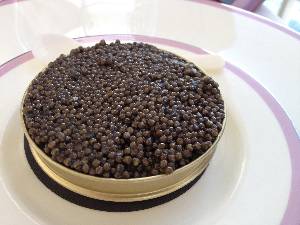 All the dishes were sensational but one that stood out, at least photographically, was Eric Fréchon’s Sologne caviar on ratte potato mousseline smoked with haddock. Many of those at my table had no idea that the French produced caviar.

I had actually been to the launch of Caviar House Prunier, when the salmon supremo, Peter Rebeiz of Caviar House, announced a partnership with Prunier.  For nearly a century, Prunier have been farming sturgeon in Sologne, a region in north-central France.

Today, we had real caviar tins, with caviar topping above a mix of ratte potatoes that had been smoked with haddock.  Look at the lavender-edged plate: all the servers, real gentlemen one and all, wore matching lavender ties. 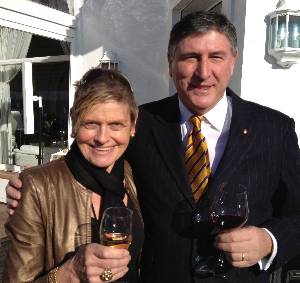 Didier LeCalvez is co-owner of the St-Emilion Ch Clarisse

The wine was Ch Clarisse 2012 St-Emilion, owned by hoteliers Didier and Olivia Le Calvez, and named for their daughter.  (Their vineyard, in Puisseguin St-Emilion, is 13 acres of Merlot and Cabernet Franc, and their winemaker is Stéphane Derenoncourt.)

What a treat it is to be tasting a wine belonging to one of your hosts – for Didier Le Calvez is not only GM of the hotel where Eric Fréchon cooks, Le Bristol in Paris, but he is COO of the entire Oetker Collection.

This means it is he who oversees making sure everything works.  Like the exact presentation of each caviar dish… and, when I last stayed at Le Bristol, I remember the beautiful lapel flowers worn by all the chic women who greet you on arrival. 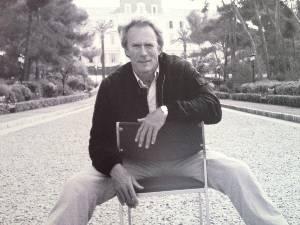 There will be no more stars, Livia Firth and her husband, or anyone else, back here at the luxurious Hotel du Cap-Eden-Roc until April 19th 2013, when it re-opens in time for the Cannes Film Festival, May 15-23, 2013.

All year long, however, photos of past guests adorn the hotel’s walls.  And now back to Cannes for yet more ILTM…