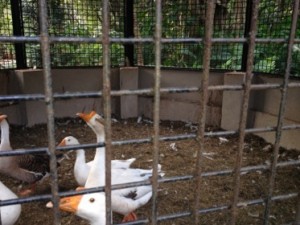 Happy birds at The Leela Goa

There are safari parks and game parks and beautiful luxury hotels that just happen to have some farmyard animals on the estate – the gal thinks of The Pig hotels in England. The Leela, Goa, has geese on its 75-acre property. They are part of the botanic walk that is absolutely, no dispute about it, worth visiting. The well-tended gardens here have rows of five-foot orchids standing bolt-upright in broken coconut bases. There areas of manicured plants and things to eat. The botanic walk goes on and on, and it is so peaceful. 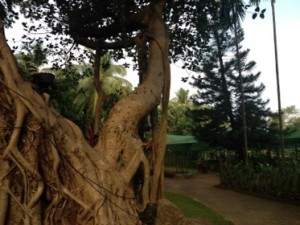 A characterful tree along the botanic walk

After the hubbub of most of Goa, arriving at the 206-room hotel is like taking in a deep breath of fresh air. My plane was late, which did not help, and then on the hour-long drive south, we got stuck in the crowds leaving a football match. Since 80 percent of the vehicular traffic is motorbike, no helmet, and another 10 percent is big, old and fume-belching buses, it was good to be in a sealed BMW with air conditioning (and, what style, both chilled and ambient bottled waters). When we arrived, finally, I took ore than one breath of that fresh air. 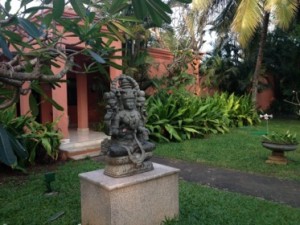 One of the many garden gods..

The much-missed and always admired and loved late Hon Chairman, Captain Nair, whose photograph stands on an easel in the main lobby of the hotel, cleverly settled on this spot, right at the southern peninsula of Mobor Beach, and decided it was the place for a hotel. He worked at first with Four Seasons and then with Kempinski and then sensibly decided The Leela company could do a better job by itself. He obviously had divine luck with him the entire time. There are several sculptures of deities set among the trees and bushes in the garden. 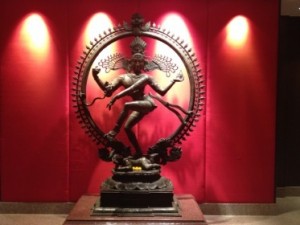 .. and a lobby deity

A goddess-like type says welcome as you enter the lobby. With at least 30 percent of guests regulars at this luxury hotel it is safe to presume that they love it so much they do not want to try anything else. More and more people will be coming to Goa thanks to increased traffic via Abu Dhabi, and there are October-May charters from UK (sadly, two of the main Russian charters have collapsed, leaving pre-paid travellers in some cases temporarily stuck here, or, in the main, back home, money lost). Those who are here, however, may well never go off-campus, preferring the fresh air here to the noise and chaos of the main streets outside…