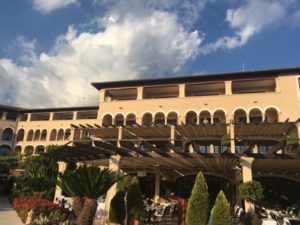 It is not often that a luxury hotel has so few could-do-betters that you could count them on one hand, but St Regis Mardavall Mallorca Resort is so near perfect that it should get 100% in all mystery shopping reviews (do we trust them now that aggregators of the calibre of Resonate can tell you what actual guests, who pay for their rooms, think?) Anyway, the gal was bowled over, by the building and its grounds, and the view from Diamond Suite 505, above, and by the suite itself. It was not too large, it was well signed so you knew exactly how to work lights, and drapes and showers (yes, plural, there was a separate shower and sauna room to complement the main bathroom’s shower). 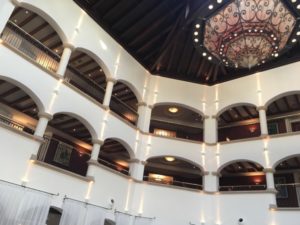 This was the vision of one man, the late Stefan Schörghuber, and it is now owned by his wife and children. It was Mrs Schörghuber’s father-in-law who had actually fallen in love with Mallorca and bought the land, at Costa d’en Blancs overlooking Punta Negra in the west-south-west of the island: he bought other land too. The entire Arabella Hospitality España, named because Mrs Schörghuber’s father-in-law was a Richard Strauss fan, includes three golf courses, Son Muntaner and Son Vida and the newest, Son Quint (all associated to some degree or another with prolific German designer Kurt Rossknecht). There are also three hotels. Castillo Hotel Son Vida, part of Luxury Collection, and Sheraton Mallorca Arabella Golf Hotel are both inland. This beach-set beauty, which has 140 rooms, all with balconies, was designed by Claudio Carbone, from Lake Constance. 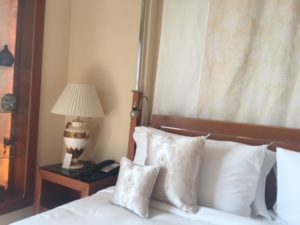 Thankfully, not a surfeit of pillows

St Regis Mardavall had actually opened in 2002 as Luxury Collection but it was branded four years ago, and it is one of the best examples of St Regis. Go in, to the upper floor lobby, and the open-atrium allows you to look down one floor, and up three floors (it is 66 steps from base to top, fifth, floor, and of course I always love stairs rather than elevators). Nothing seemed to be too much trouble for the people working the lobby. My WiFi packed up, which of course invariably would happen on a Sunday morning, but being a good hotel butler, Rico was up in five minutes, he produced engineers in another five minutes and, hey presto, a new router was added – try doing that in an Airbnb. When I asked for housekeeping, a team came within ten minutes to do the room – thank goodness I did not have the dozen-or-more pillows that some so-called ‘luxury hotels’ seem to consider today’s norm. 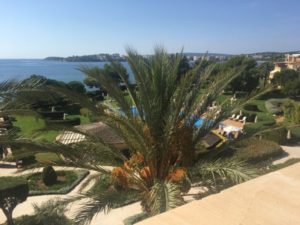 The bed was also really comfortable, and it did not mind me throwing myself across it. The phone on my desk, in the living room (see the video below) was a small hand-held thing that was impossible for this first-timer to fathom so whenever I had an incoming call I had to play Rugby Sevens all by myself – yes, a new game, Rugby Ones – nd tear through to the bedroom and hurl myself across the bed. The highlight of this luxury hotel’s corner suites, however, has to be their outside terraces. Mine was big enough to entertain a dozen of my favourite friends, though I doubt if we could all have got into the circular jacuzzi all at once. Yes, I loved this hotel, read on for food, wellness and events but, meanwhile, see the video of the suite, below.