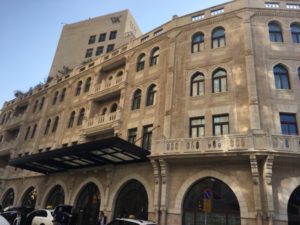 Israel is much more than Tel Aviv, so although time was short the gal did make one side trip, primarily to see another outstanding Hilton-family luxury hotel – in Jerusalem. Four Seasons has been talking for years about coming to Jerusalem but, says the country’s top consultant, Yossi Fischer of Tel Aviv-based Vision Hospitality, it seems to have stalled (Isadore Sharp apparently still has faith in the original developer). The most strategic name in town right now is Waldorf Astoria Jerusalem, which evolved in 2013 from what had previously been The Palace Jerusalem. The 226-room hotel is in a stunning building, which has grown around a core structure dated 1928-9: the front façade of this original is now one interior wall of the hotel’s glass-roofed triangular inner courtyard. 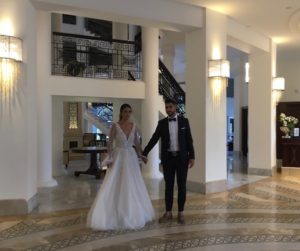 This is a society hotel, as I realised when I coincided with a wedding couple getting ready for photographs. Jerusalem also attracts a considerable number of bar mitzvahs out of the USA. Especially during August, travel agents plan the entire trip for the young man, or bat mitzvah woman, and a family retinue that can go up to a couple of dozen. On Mondays and Thursdays, the weekly Torah portion is traditionally read during the morning prayer service at the Western Wall (the Wailing Wall), and the bar-mitzvah boy is called to read from the Torah for the first time, followed by singing and dancing (some order a certificate engraved with the boy’s name and signed by the official Kotel rabbi from the Western Wall Heritage Foundation). 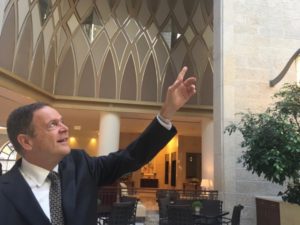 Avner On looks up

And then feasting is held back at the hotel, which is run by GM Avner On, who became a hotelier because, as a youngster, he used to look up at the 17-floor Hilton Tel Aviv (he looks up, to the top of the lobby of Waldorf Astoria Jerusalem, to illustrate this). His Director of Operations, Maria Ghebresselasie, is a Londoner, with an Eritrean father and an Italian mother. She was all set to become a UN translator but instead of doing a university work-experience spell at the Colombian Embassy in London she somehow got diverted to hotels, and the rest is history, she is a hotelier hooked for life. I told her I really wanted to try the smoked salmon confit depicted on the inside of the hotel’s elevator cabins – see the photo above. Sure enough, what was presented in The Palace restaurant was a plausible twin, with smoke swirling out when I took a glass dome off the salmon (be aware that this dish is not available during Shabat). 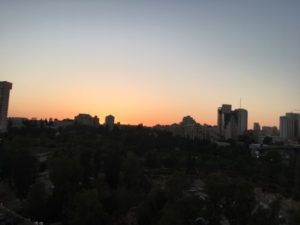 Cleverly, one of the side rooms of The Palace is opened up in the morning to reveal a dedicated breakfast room – I have already extolled the superb quality and variety of Israeli breakfast buffets. Everything from a dozen smoked fish through to sweet buns, even green cake slices, was presented here, but then a luxury hotel is, according to Maria Ghebresselasie, a blend of function and purpose. The function here is feeding people before they go to the Wall, or the Tower of David or through the soukh passageways. The purpose is to exceed expectations. I thought about this early evening as I stood out on the balcony of room 807 and watched the sun set over the Old City. SEE THE ROOM, IN THE VIDEO BELOW.