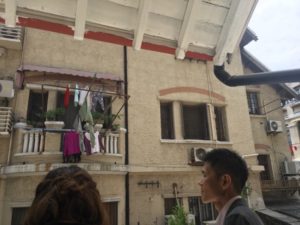 An oasis, looking out at old buildings

The gal then went on to Shanghai, as many already know, for ILTM Asia, the must-do event that gathers anyone interested in, and involved in, luxury travel in or out of, or around, Asia Pacific. As well as fixed events at ILTM Asia itself, there were lots of special other events. Peninsula Shanghai, about which we will hear much more in a few days’ time, hosted no fewer than three mega-happening during that week (that supreme luxury hotel’s ILTM task force, six in number, starts planning six months ahead). Among individual exhibitors coming into China, Dolder Grand, that amazing resort that looks down at Zurich and its lake, always comes up with something memorable. Last December in Cannes, for ILTM 2016, MD Mark Jacob co-hosted lunchtime champagnes, sic, with mini-bite eats, at Christian Dior on the Croisette. 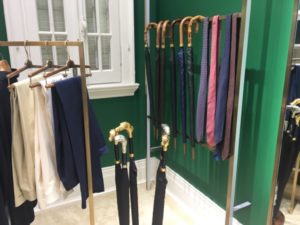 Allen Xie is a potpourri of taste

Here in Shanghai, however, it was an even more noteworthy event, at Allen Xie tailoring club. Head along Middle Fuxing Road, in the French Concession area of the city, and, if you did not know where you were going you could completely miss Allen Xie’s Pandora’s Box of a sartorial treasure trove. Through an unmarked door, you are in a freshly-painted courtyard, about the size of the bathroom of most top luxury hotels’ suites these days. I looked past the courtyard’s hydrangeas as neighbouring houses, un-painted, laundry hung out on the terraces, and was invited to turn right, into Allen Xie’s house. Inside was heaven, pine-green walls with white highlights, and every room yet another emporium of design. See, in the photo above, Dolder Grand’s Mark Jacob, left, and Mariano Tribelhorn flanking the designer-host, Allen Xie. 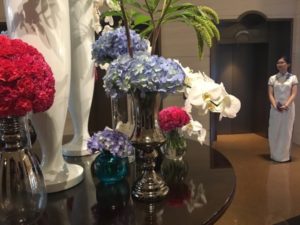 One room had a whole wall of  brightly-coloured suit jackets hanging, as a rainbow, from upper rails – an Allen Xie is recognisable by convex lapel edges. There were displays of imported Italian ties, and gold-topped walking canes, and shoes. Allen Xie was studying law in his native Wuhan when his love of fashion got the upper hand: he now has four studios, or clubs, like this, only accessible to his members (about a thousand, he says, in perfect English). Come here, drop in, have a glass of excellent wine and what are really good one-big-mouthful-bites, say crèpe tubs filled with vegetable cubes. Great, I had a worthwhile time, and Dolder Grand’s team of Mark Jacob+Mariano Tribelhorn showed yet again how they, and that hotel, know how to get through to, and impress, the global ultra high net worth market (I am most impressed that Dolder Grand is now suggesting flying in on its GS650 Gulfstrream private jet, maximum ten passengers, a range of up to 14.5 hours’ flying time, ideal for getting to Sir Elton John’s concert in Zurich on July 12th, 2017). 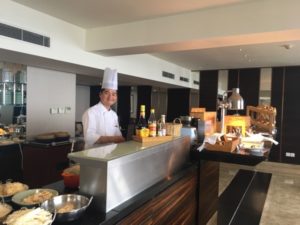 Best all-show ILTM Asia 2017 networking, going on for four days, Monday pre-Forum through to end of the main event, was as always in past years, in the 43rd floor executive club lounge of Portman Ritz-Carlton. This luxury hotel is directly across Nanjing Road from the show venue, Shanghai Exhibition Centre. An established entity, the Portman still,  as under previous GM Derek Flint, knows the importance of its work people when satisfying ILTM delegates who can, let us be honest, be a trifle demanding, and certainly discerning. This was new GM Tarik Temucin’s first ILTM experience and he was always around, welcoming people, making sure everything worked. I personally like the fact that the chefs in the club lounge seem to cook whatever you want, there is a big enotheque for help-yourself wines at any time, and yes, this is where you meet people for worthwhile networking.