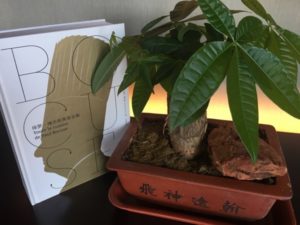 NUO is Chinese luxury for the world – the equivalent of Shang Xia in fashion (that one is half-owned by Hermès, this one, the luxury hotel brand, is, on the management side a joint venture with Kempinski). The gal had already seen NUO Hotel Beijing, but staying in the hotel, which spearheads a brand that is planned to grow, was to prove a delight. Thanks to HBA’s emphathetic design, the 438-room hotel does truly feel like 21st-century global timelessness, with continual Chinese highlights. See suite 2622’s pot of calligraphy brushes, above, and a close-up, left, of one of the bookshelves, with Bocuse, in Chinese, and a bonsai. Of course the suite has a simple, universal Nespresso machine, and a kettle and teapot, which happens to be blue on white ceramic, in Ming Dynasty style. 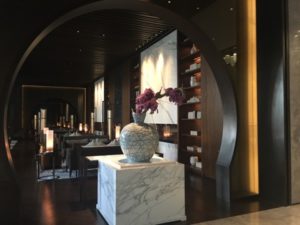 The hotel celebrates the Ming Dynasty, throughout. There are ceiling-high blue on white ceramic panels set into upper corridors, all of which have natural daylight. In the gigantic and airy lobby stands what looks like a guard of honour, of ten-foot high Ming-type urns. In the Tea House is a corner retail display of exquisite belts, earrings and other accessories formed partly of bits of Ming ceramics. All this, by the way, has attracted the attention, and business, of Beijing’s A-list high achievers, especially the under-40s. To see the latest in couture fashion and style, head for the lobby, and its peripheral lounge areas, any day or evening. Word on the street, too, is that the food here is really good. 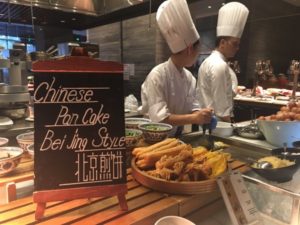 I would agree. There is Chinese, and international N’Joy, which is truly global. I was amazed, here in China, to find chefs from India, Italy, Japan, Korea and Syria manning the many live cooking stations – at dinner, buffet offerings also included caviar, and foie gras. I started dinner with sashimi, cut to order, that included divine white tuna, for which the sommelier suggested a glass of local Kanaan Winery 2014 Riesling – for red, the choice was Jia Beilan Qing Xue 2013 Ningxia Helan Qingxue Winery (interestingly, that very day China’s best-known winery, Changyu, had announced its latest global expansion, namely the purchase of three wineries in Chile). I did not, by the way, try any of mixologist Attilio’s imaginative cocktails, say a Pisco-and-Pilsner ‘The Fashion’. 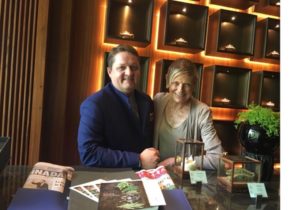 Adrian Rudin, this luxury hotel’s Swiss GM who has actually helped create the NUO brand, is a former chef who believes that food is a great way of creating hotel loyalty. He has been immersed in China’s culture for some years, by the way, and had he only been able to read and write Chinese he would have been a proper tea master – but he knows a lot about it, anyway. Next visit I plan to look at, and try, some of the teas here, leaves that have been specially produced and packaged for the hotel – but then I also want to learn more about why so many brushes, as in my suite, are needed for calligraphy, and what to do with the feather brush? My last impression is of an inspirational theatre that makes you want to know more, and try more: I suspect that we will hear much more about NUO, in various countries of the world, in years to come.  NOW SEE THE VIDEO BELOW