Bukhara, the restaurant that is known worldwide...

Ever had the feeling that you have been travelling so long, on business or for pleasure, that you need a strong injection – not Lance Armstrong style but simply, honestly, good food and a work-over?

The 2.5-hour flight from Chennai to Delhi, in a brand-new Dreamliner 787, was, ‘memorable’.  Anyway,  the gal felt she needed another injection of good food on arriving at ITC Maurya in Delhi.

This is home of Bukhara, a signature world restaurant of the calibre of Four Seasons Restaurant or Grand Central Oyster Bar in New York, The Wolseley in London, Mezza9 in Singapore and Gaddi’s in Hong Kong, namely seeming to have been around for ever and better than ever. 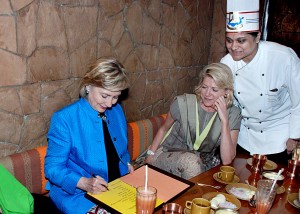 Hillary Clinton is among the myriad of aficionados

This is the restaurant that inspired Peshawri in Chennai and elsewhere – but this is the only ‘Bukhara’.  It was built in 1985 at the suggestion of S.S.H. Rehman, Executive Director of the hotel’s owner, the powerful ITC Welcomgroup.

It has expanded over the years – it now has 130 seats (no reservations after 8pm) and it does a minimum of 450 diners a day total, mostly at dinner.  Sixty percent of these are not staying at the 440-room luxury hotel and of this number, many come on a regular basis.

Some of the irregulars include such notables as Hillary Clinton, Sir Mick Jagger, that ubiquitous veteran tennis star Vijay Amritraj and a host of prime ministers. The hotel is in the diplomatic area of Delhi so anyone who comes to town is not only brought here, but rushes here, willingly. 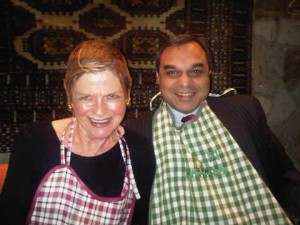 You wear a red and white checked apron while eating (Anil Chaha's green apron shows he is eating vegetarian, tonight)

Tonight we are next to a party of 12 Japanese men.  On the other side are two American women.  I can see lines of people arriving outside, knowing they will have their names taken, and go on to have a drink in the bar until a table is free.

The maitre’d, Kawaljit Singh, comes over to say hello.  He knows every repeat diner’s favourite wine, and we get our Gaia Sito Moresco 2006 at lightning speed.  We put on the checked aprons (full length, that is 32 inches from top of the chest piece down to the hem) that are thoughtfully provided, red and white for carnivores, green and white for vegetarians.  We use the moist terry towels in bronze holders – this is a use-your-hands restaurant. 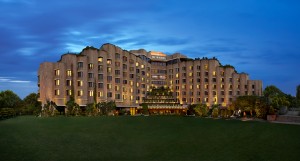 The ITC Maurya is built as an ancient fort

A vegetarian order includes Paneer tikka, cottage cheese and cream and chillies; Tandoori Phool, cauliflower; Tandoor Simla, stuffed capsicum and Tandoor Aloo, potatoes.  A selection of naan – one is Naan Bukhara, bigger than a baby’s blanket – and other local breads comes, and comes again. The dish of thick yoghurt, with diced onion and tomato, is addictive. For others, the Dal Bukhara, cooked for over 18 hours, is a big draw. 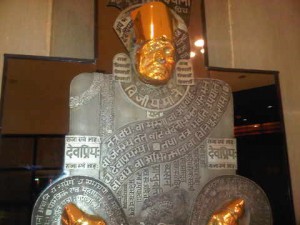 The hotel takes its name from the Maurya empire and outside it looks like a fierce Dholpur stone fort, based on third century BC Buddhist stupas.  Inside, one of many memorable art works is a flat wall-set sculpture, dark metal lifesize man with sculpted bronze face.

Attributed to A. Ramachandran, this represents the Mauryan emperor Ashoka’s anguish at the destruction of life after the Battle of Kalinga, 261 BC, when at least 25 percent of the 400,000 participants lost their lives.

Overhead in the main lobby is a three-tiered multi-panelled ceiling showing, in all, a 300 sq ft mural with typical scenes of Indian life, according to artist Krishen Khanna, who has included himself among the likenesses. 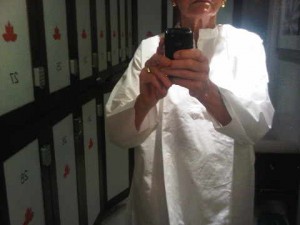 In the spa, in a pair of oversized white pyjamas, all ready to go...

I had started the morning with a refreshing swim in the outdoor pool that more or less separates the two wings of the hotel, the eight-floor original building and the newer Tower.  I was looking forward, next, to going downstairs from the pool surround for the massage.

The spa here is delightfully different, all white with bursts of deep scarlet, from elaborate Murano chandeliers to bowls of fresh rose petals and towels neatly piled in stacks.  I put on loose-fitting white pyjamas and I was shown into a room with a mattress on the floor.

I lay on this while a Miss Thailand (in muscle-power as well as I guess looks, though since I had my eyes closed for 60 minutes I cannot talk about her face).   She pulled and pummelled, twisted and turned, evolving my arms and legs into a spider’s web of different contortions. 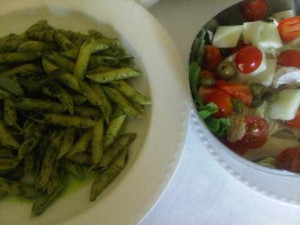 Pasta and salad, and then really ready to go...

At the end I was not sure if I was dead (no) or in heaven (quite possibly).  I was breathing better, I had woken up and I felt, well, rather like a ball of knitting wool that had now been unravelled.   I had been using the adjacent gym hard, on a couple of occasions, so undoubtedly this strong Thai massage was just what the travel doctor ordered.

After that, and not wanting to compete with last night’s amazing North West Frontier food, I ordered up a traveller’s comfort-food lunch, penne pesto and a plain salad, and felt ready to face the world again. Yes, everyone needs a shot of rejuvenation.