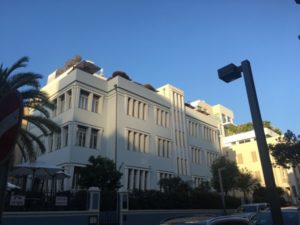 The Norman, Tel Aviv, is one of two independent luxury hotels named for its owner’s father (the other is The London Hari Belgravia). South Africa-born multi-talented entrepreneur Norman Lourie, who owned Israel’s glamorous Dolphin House Hotel in Shavel Zion, also set up Palestine Films, and he was a military reporter and a poet. Some of his words, led by ‘In the beginning there was nothing but the murmur of the sea, sand dunes in Galilee’, are written in raised letters on the stairwell, shown below, of the hotel that his son has named in his honour. Honestly, says the gal, The Norman has so many unique features, and it is utterly beautiful. Go up a total of 15 steps from Nachmani Street, in what must surely be the most chic part of this trend-setting city, and you reach front desk (see above), run when I arrived by the epitome of an elegant Frenchwoman, just arrived from Paris. 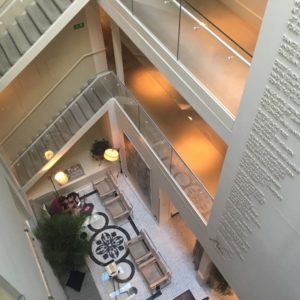 Looking down the stairwell, poem on right

Ah, that is my secret weapon, GM Yaron Liberman said later, over a glass of Shoresh 2015 Tzora Vineyard. Instead of hiring his staff he selects them, and he chooses olim chadashim, young foreign Jews who have decided to come, at least for long stays if not to live, in their religious homeland (who cares if they do not speak Hebrew? They can learn, and anyway nearly all the hotel’s guests, of whom 56% are repeats, speak English). This means that, uniquely among the Tel Aviv hotels I have visited on this stay, The Norman has no staffing challenges. It is also the only major hotel that is not kosher, which must be a big plus in attracting some guests, say those who want cooked-to-order eggs Saturday breakfast, not permitted during Shabat, and pasta lovers who must have parmesan on spaghetti bolognese, not allowed if cheese has to come from a dairy kitchen, the sauce from a meat kitchen. Here, at this SLH hotel, you can have what you want, when you want it. 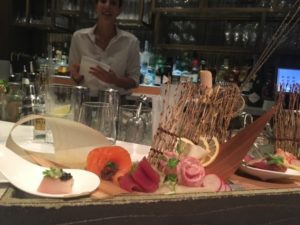 This is one of the points listed in the small 10 Beliefs code that every one of the 200 staff members carries at all times, namely guest is GOD (another is that everyone carries bags, or does anything..). How come a hotel that only has 50 rooms needs so many workers? Well, the main hotel, a conversion of the 1925 home built for Isser and Chassia Romanov, is complemented by its neighbour, a 1924 Bauhaus home once owned by a Mrs Friedman (both have been studiously renovated by architect Yoav Messer, working with historian Professor Nitzah Samok), and this, the Friedman home, has 13 long-stay apartments. There will also be more accommodations in a newly-bought home across the street. Add to this the non-stop busy restaurants and bars, and outdoor areas, and a rooftop pool that has service, and it all adds up. 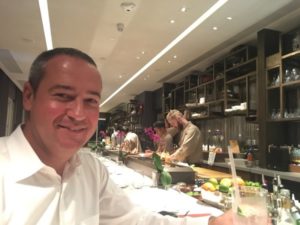 Tel Aviv’s high-fliers just LOVE this place, and some move in, even if only a couple of streets away, for weekend staycations (I would move in too, enticed by the 24/7 glass-sided rooftop gym with sudoku-Technogym – and for the food, and my room, see the video below). Yaron, which is what all his team call him, and I had a moveable bar feast. Downstairs at the main restaurant, to be renamed Alena after Norman Lourie’s wife, we tasted such heavenly bites as Josper-grilled cauliflower, and courgette tempura. Upstairs, at Dinings, the signature sashimi plateau de fruits de mer was essential (‘culinary art is sacred’ is another Belief). And then, talking about flexibility, I came down at six, another charming girl on front desk handed me my breakfast-to-go, in a Norman bag, of course, and I got into the waiting taxi. As the driver, with long red fingernails and in a black feathered top, drove the traffic-free route, I drank excellent coffee, ate a yoghurt and addictive sourdough bread. At the airport I handed the rest of the meal to the driver. She smiled. SEE THE VIDEO BELOW