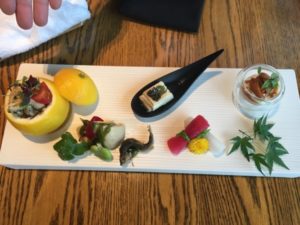 There are now so many Nobus around the world that every major city, with the exception of Bangkok and Singapore, seems to have one. The luxury InterContinental Hong Kong hotel has a unique Nobu, however, and not only because all-wall windows offer unparalleled views over Hong Kong Harbour. Ever since the restaurant, designed by David Rockwell and with its ceiling of sea-urchins, opened in May 2006, Nobu Matsuhisa has done extra specials here. At the moment the restaurant, which is led by long-time Nobu-san disciple Sean Mell, whose hands are seen in the photo above, with the help of Kazunari Araki, is running an additional Kyoto-themed menu. The gal tried dishes from it, above and left. 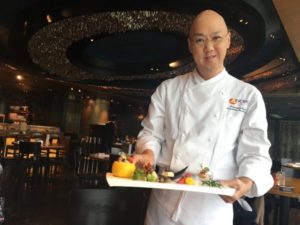 The Kyoto set meal here costs HK$888 (lucky 8s), plus 10% service. Dishes came fast, furiously and fabulously. We tried hyuba tiradito with caviar, guji senmaizuke roll, fried chiayu, temari sushi, black cod saikyo yaki, US prime fillet with wasabi salsa, sansai takikomi gohan, but then we gave up, forgoing clear soup, then a jade blush, and then a glass of mocktail.  Hong Kong people are great foodies, and they also like a bargain. For some months this hotel, led by clever GM Claus Pedersen, has been running what they call Moreish Fridays. From 0000 on any Friday, right through to 2359, you can buy, from the hotel’s website, a variety of special-price meal experiences, to be used any time during the following week. 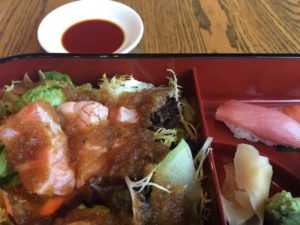 Being Hong Kong, this cut-price-sale really works. I am told that some special offers sell out by 1 a.m., that very morning. The hotel, of course, gets the money up front, at the time of booking, so everyone is happy. Diners get a bargain, restaurants get even more business, and the hotel has use of the money. But then there is always something going on here. On June 8th, 2017, the STEAK HOUSE winebar + grill restaurant introduces celebrity butcher Alexandre Polmard, whose uniquely matured meats will be available until the end of August. Boucherie Polmard, on rue de l’Abbaye in Paris Saint-Germain-des-Prés district, has made the name of the owning family, and Alexandre Polmard, who is farmer, breeder and butcher, is sixth generation. 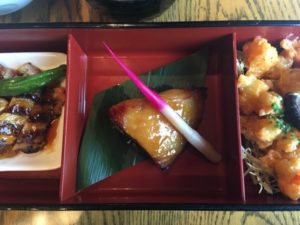 It was his father and grandfather who revolutionised the way meat is aged by creating a special treatment called “hibernation” in which cold air is blown over the meat in a -43C enclosed space at a speed of 120 km per hour, for a feeling of -120C. While dry-aged beef is typically matured for just several weeks, every cut of Boucherie Polmard Paris uses this hibernation method to freeze and preserve beef for up to 15 years of ageing. I have a feeling that if it goes down well, Polmard beef might just stay forever on the list of this luxury hotel, in which case it could well be served when Forbes, the magazine rather than the travel guide, hosts its 100th birthday here later this year.