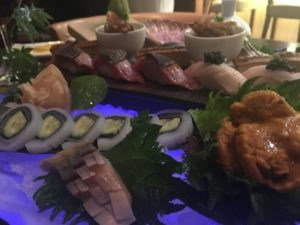 A mixed platter at Matsuhisa

The gal just knew she was going to be in for a great eating experience back at Paris’ super-luxury Le Royal Monceau Raffles hotel, and as soon as she saw her welcome (above) the gastronomic journey began. It always helps of course when the owner, or in this case the head of Katara Europe, Omer Acar, is an acknowledged foodie: he ran Harrods Food Hall back in his distant past. And the hotel’s equally passionate GM, Aaron Kaupp, is another who knows his snap from his sugar peas. In fact dinner started, at Matsuhisa Paris, with warm edomame, first plain and then slightly spiced, and went on to a variety of sashimi and sushi. 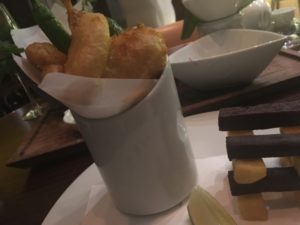 Ah, Nobu Matsuhisa, how we all love you. But this was my first experience of dining at a Matsuhisa, which is a slightly upmarket Nobu and is owned directly and 100% by Nobu-san – Nobu restaurants are owned and managed by a business-oriented consortium that I suspect gives the big name little say when it comes to expansion, including into hotels. Matsuhisa Paris replaced this lovely hotel’s French restaurant, and, when it opened April 2016, instantly became a big hit. It is full at lunchtimes, with local business people as well as ladies who lunch, and at dinner it is full every night by nine (Parisiens, says Omar Acar, are dining later and later). 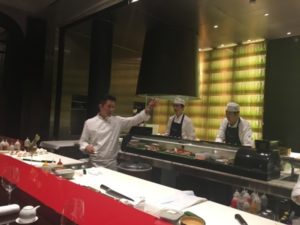 Our meal culminated in fish and chips, yes, that English comfort food, also claimed by the Scots, Aussies and New Zealanders, and here in Paris designed by a Japanese who has spent years in Peru. The tempura-ed seabass was so good I had a second order – I managed to leave the purple, and the white, potato chips. This dish was cooked by another highly theatrical Japanese, Hideki Endo, from Hokkaido, who controls the open kitchen here as if conducting an orchestra. It is also fascinating, by the way, to see how that kitchen evolves into the buffet serving area at breakfast. 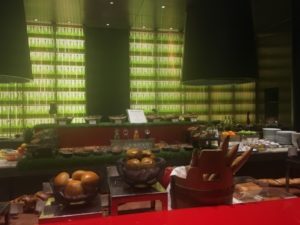 .. and the same theatre, at breakfast

And breakfast in this luxury hotel is one of the best in the world. The buffet has so many well- labelled Pierre Hermé delicacies, including marron croissants, it is difficult to know where to start, and certainly when to stop. There are Bordier yoghurts, and Beillevaire butters, and halves of avocados (I had a green detox drink, and two cups of sensational French-press coffee in gold-sided Haviland porcelain cups, specially for the hotel). They bring eggs to order and a minute Japanese lady near me was brought two eggs Benedict standing as high as size-C cups. Yes, this is one of the best buffets ever. SEE A VIDEO OF MATSUHISA, BELOW