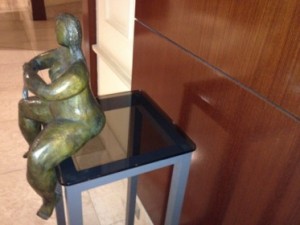 Well my goodness gracious me, it was only yesterday that the gal was being introduced to Croatian-born sculptor Mateo Mornar, or at least to his work.  And now here he is, displayed in another luxury hotel, Fairmont Monte-Carlo, the highly-successful hotel that seems to think it is a cruise ship (but more of that anon).  There are least two Mateo Mornar works, one his take on the Crucifixion, by the sixth floor door that leads to a walkway to Monte-Carlo’s magnificent Casino.  The other, anonymous, is here in the lobby of the 616-room hotel.  Yes, it operates big, does this place. 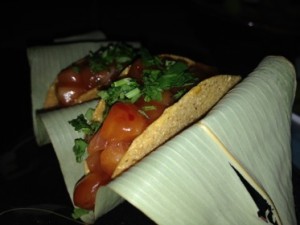 Snacks while waiting at Nobu bar

For instance… since my last visit Nobu has actually opened, and it is brilliant. A mammoth space that seats around 240 in different areas, it is designed by Martin Hulbert and managed by a charismatic Italian, Luca Fametti (well, aren’t they all charismatic, even up to the current Prime Minister?).  He, Luca Fametti, looked after me while I waited for my friends, who were having difficulty getting their six month old to bed, a youngster who turned out to have four legs and a mind of its own, particularly having just arrived by train from Paris.  While waiting, I was brought a salmon wrap that was so delicious it was a great foretaste of what was to come. 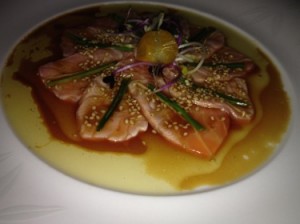 And the meal continued, deliciously. We had salmon, Nobu style, which went very well with Pinot Noirs, first with Champy Beaune 2011 and then Bellvale Gippsland 2008.  We talked about how during Formula One (Monaco Grand Prix) this place is so packed they do well over 500 diners, including 32 at one table – next Grand Prix is May 21-24, 2015, so make your reservation now. Year round, Wednesday and Thursday evenings, there are live DJs here, turning tables 7pm through 11.30 pm. For the next two days, after my visit, the International Olympic Committee, including the UK’s Princess Anne, the former King of the Hellenes and, for some reason, FIFA’s Sepp Blatter, are meeting here at Fairmont Monte-Carlo.  I hope they, too, have a chance of dining Nobu-style. 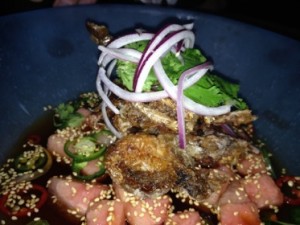 .. dishes followed one after the other

Nobu’s black miso cod is a signature of all the restaurants he and his team operate, including in such other luxury hotels as the Metropolitan in London, Corvinus Kempinski in Budapest and InterContinental Hong Kong – his former winter-only Nobu at Badrutt’s Palace, St Moritz, has just switched to calling itself Matsuhisa. And then there are his restaurants at Nobu Hotels, say in Las Vegas. Tonight, here at Fairmont Monte-Carlo, we include a soft-shelled crab in our order, and I think back to Galapagos, and seeing empty shells after crabs have slithered out of them, as out of a wet-suit, temporarily to become soft-shelled crab…