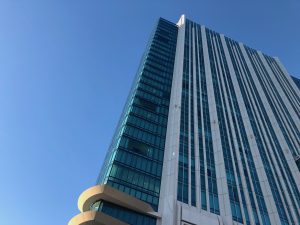 San Francisco always reminds the gal of the Grand Old Duke of York – the old one, note, not the current one. This is a city of marching up the hill, Nob Hill, and marching back down again, although this time helped by Uber.

Let us start downhill, at the new (well, 2008-vintage) and really convenient InterContinental San Francisco.  Why is it convenient?  It is seven minutes’ walk from Powell Street station, so a direct BART link from the airport. It is right next door to the Moscone Center, so could not be handier for many of the city’s main events. And it is convenient in-house.  The lobby combines conciergerie and co-working, and a bar that flows into a bistro and on into a Michelin-starred restaurant, Luce, that locals love.  This is always a good sign.  Newly-arrived GM, Raymond Vermolen  has lots of plans for adding highlights of fun to what is already a very practical machine-of-a-hotel. Over sensational ravioli with wild mushrooms, and a glass of Enroute Russian River Pinot Noir Les Pommiers 2017, he shared the story. Apparently there were once a couple of little inns on this spot, but they were razed to make way for a public parking lot.  And then along came a couple of healthcare philanthropists who wanted to own a hotel. Hence this 558-room hotel. 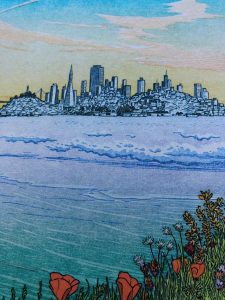 On every floor, two end rooms seem to be about 50% larger than their neighbours. I was in one such, #3020, and all-wall windows, including in the bathroom, gave marvellous views of the Market area and downtown, generally. Unsurprisingly in this city-of-tech, I had enough sockets and USB ports for the entire 49-ers team, and WiFi was superb.  It was a nice touch to have a welcome platter of California cheeses, with their labels – the Carmel and Ragged Point goats cheeses from Stepladder Creamery are especially super. The accompanying card was a delightful hand-coloured woodcut by Tom Killion of The Quail Press.

The most important tip for staying here, by the way, is to buy lounge admission. Breakfast there is more than adequate – even a choice of plain, or ham-studded, scrambled eggs – and there is lots of fresh fruit, that stays out all day. Evening cocktails come with enough food for an average dinner. Handily, the club lounge is on the sixth floor, a short walk along from the 24/7 mixed brands fitness centre, and an 18-metre pool which seemed noticeably under-used during my short stay. 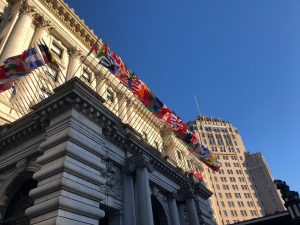 Then it was time, after a memorable and calorific dim sum lunch at Hakkasan, to  head up Nob Hill to a more venerable luxury hotel. Fairmont San Francisco, named in 1902 by two sisters in honour of their father, James Graham Fair, has since spawned one of Accor’s, and luxury travellers’, favourite brands – Fairmont.  The present hotel here, rebuilt in 1907 after the previous year’s earthquake, has 592 rooms, enough enormous and lavishly gilded function rooms to rival Versailles, and boutiques that include a working jeweller.

It may be a classic, with seemingly acres of mottled marble and columns and 12-feet high potted palms in its lobby but, as always, this place is bang up to date.  In 1945, instead of filling in its 25-metre indoor pool, MGM’s top set designer Mel Melvin floated a boat on it, and turned the pool surround into a South Pacific restaurant, Tonga: nightly, a group plays on the boat as customers around drink endless mai tais to go with 28-hour grilled short ribs. 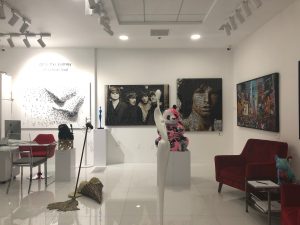 Two months ago, the lobby’s residential sales office was replaced by an absolutely stunning Gefen art gallery, a branch of the Jerusalem-based gallerist. It is mesmerising, this now-white space, shining out into the lobby and inviting hotel guests, and others, to come closer to admire, say, Stephen Wilson’s vivid purple skull, printed by 3-D, adorned with lifesize Red Admiral butterflies (only when you get close up do you realise they are hand-embroidered, with thousands of barely-visible stitches) .

It does seem that many of San Francisco’s hotel lobbies are multi-purpose.  Here at The Fairmont, the rear of the lobby offers, under a giant hemispherical dome, all day Laurel – not palm – court. To show how stiffness has no role to play in California, 2020, you will undoubtedly have to share the space with traditional suits and ties as well as all-age casual life, sweatshirts and sneakers. Share a glass, say of Patz & Hall 2016 Pinot Noir, with a hotel historian, Hotel Manager Jacco van Teeffelen: he will describe the hotel’s Presidential Suite, with a secret door through which President Clinton once managed to evade his security for a few heart-stopping moments.

Mind you, those who have seen that over-the-top suite may well be only too pleased to escape to more relaxing abodes, say  the soft-hued S-15, a one-bedroom part of the Spreckels Suite, named for a local family known for philanthropy – it has the most dramatic 15th floor views down to Alcatraz Island. And, as should happen in any top luxury hotel, but rarely does, if you have an early flight and have pre-ordered breakfast, which anyway starts at five, will arrive exactly at your requested time, iced water and Alain Milliat preserves included. Down in the lobby, the chiaroscuro of the white-light Gefen gallery with the muted marbles of the 1907 lobby is a final reminder that this is truly an historic  hotel for today.