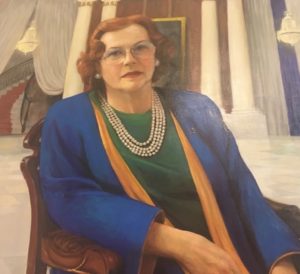 Want stunning classical music and sincere luxury? Now is exactly the time to head to that unique luxury hotel, Le Negresco Nice, ‘Made in French Riviera’. Precisely six months after this beautiful Côte d’Azur city was unwittingly projected onto the front pages of the world’s media, now it is not only running as well as ever but better than ever, and, says the gal, its iconic hotel is even more polished and loved than before. It has one-offs. Look above at the La Rotonde, a circus-like room, right on Promenade des Anglais (the background music at breakfast here is pure symphony). La Rotonde was installed in 1968 by Jeanne Augier, also known as Madame, who 11 years before had bought Le Negresco because it had an elevator wide enough for her mother’s wheelchair. 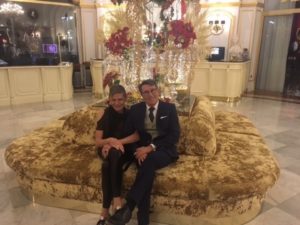 Pierre Bord, in the hotel lobby

Today it is Madame, who still lives up on the top, sixth, floor of the hotel, who needs that wide elevator, with its scarlet cabin. Her beloved hotel is named for a Romanian entrepreneur Alexandru Negrescu, who asked the Café Society’s darling architect, Edouard-Jean Niermans, to design him a little something. This, with its original pink dome, is now in the more-than-capable hands of ultra-passionate hotelier Pierre Bord. He is the one, incidentally, who is always recognisable at ILTMs and such other events, even Virtuoso in the heat of Las Vegas in August, by his yellow or orange neckscarf – every top travel advisor loves this man of the world. 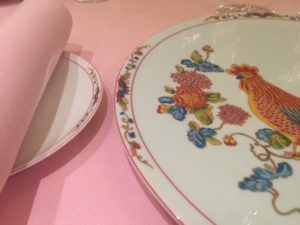 He is so versatile. Since my last visit he has redone several rooms, including lovely 305, overlooking both the neighbouring Musée Masséna gardens as well as the Mediterranean – see the video of my room below. He has made the bar, with its stately-home gallery, into a real happening place, with live music, and hundreds of original art works and sculptures, with such names as César, Dali, de Saint-Phalle and Vasarely alongside 18th century tapestries and ancient copper bathing tubs. You see first-timers at the 120-room hotel with mouths open. Is this really a hotel, or is it a museum? It is both of those and more, including a gathering place for local Niçoises. 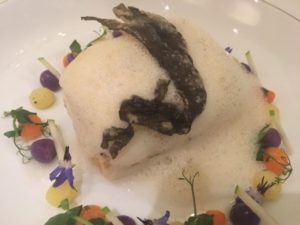 People come for meetings, and for special dinners at the Michelin two- star Chantecler, where Jean-Denis Rieubland MOF, one of the most humble of chefs, does marvels with local products, say browned scallops with different colours of beetroot or, as shown, steamed turbot with Bordier seaweed butter, artichokes and baby vegetables (his special menus on December 24th and 25th this year are heavy on truffles, with foie gras and then with Bresse capon, and you continue to a finale of 13 Christmas desserts). It was Madame who chose Chantecler’s gorgeous Limoges porcelain, and the pink linens, and, perhaps, the turquoise or Menton yellow Peugeot salts and peppers in Rotonde. But it is his muse, Pierre Bord, who ioversees bringing this luxury hotel right up to 2017 – see, in the video below, how my room is idiosyncratically ‘Negresco’ but a far cry from the fake fur coverlets and plastic lampshades of a decade ago. I get into the Mercedes on departure, listen to soothing Mozart, and smile. NOW SEE NEW-LOOK SUITE 305, BELOW