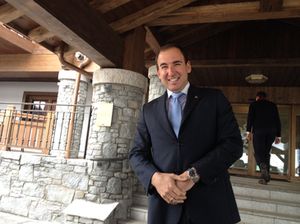 The newest kid on the block, when talking about luxury hotels at Courchevel 1850 – the superior, luxury level of the long drawn-out Courchevel ski complex – is L’Apogée, which the Oetker Collection opened December 11th, 2013.  It is owned, says the gal, by Xavier Niel, who is into communications, in the form of IT and Le Monde newspaper. He brought in designer India Mahdavi, for the 55 rooms, and Oetker as managing company, and Oetker in turn brought in the jovial Duarte Bon de Sousa, a Portuguese from Oporto who started his career at Four Seasons Ritz in Lisbon.  Duarte Bon de Sousa has now, by the time you read this, successfully closed the 55-room hotel after its first season. 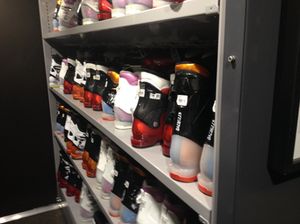 Ski boots, in all sizes and colours

He has seen masses of international skiers, from all over the world, and he has got to know many of them personally (there is a minimum seven-day stay during high season, which always runs Saturday to Saturday, which means the 280 employees work jolly hard that day re-cleaning rooms and getting ready for the new lot of visitors. Even the ski concierges work like blazes, cleaning boots to store for their owners’ next visits, and getting the right size ready for new arrivals. And boots today are such vivid colours, bold patterns. There is now an unwritten rule, by the way, that just as you automatically expect every decent hotel to offer free WiFi, every luxury-level ski resort must be ski-in, ski-out. 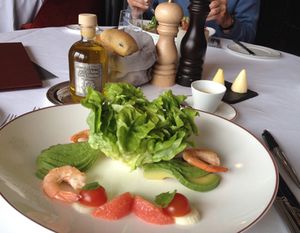 India Mahdavi has made the bedrooms bold statements.  They have carpets of foot-by-foot black and white squares, and folksy wood chairs, Alpine style, with white fur seats. Come to think of it, designer Joseph Durand has been pretty bold in the restaurant he has designed here, Comptoir, down 21 ‘red carpet’ steps from the rear of the hotel lobby. The room is like an all-day nightclub, midnight blue with the far wall a big window looking out to the snow. Around the edges are some intimate and romantic dining booths. I decide I need chef Frank Ferigutti MOF’s energizing salad, and look at the picture that results, a lettuce core, baby tomatoes, shrimp, avocado, grapefruit, and heart of palm.  It is supposed to go with a citrus dressing but I ask for oil, which brings a can of Puglia oil, Fernando Pensato specifically for the hotel. 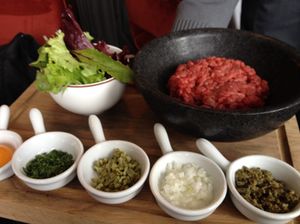 .. and the ingredients for…

All meat is French, says the copious menu (other than the chateaubriand for two, which is Australian Black Angus).  I go for one of the restaurant’s all-time classics, Blonde d’Aquitaine steak tartare, prepared at table.  Ingredients are brought over for my perusal, and while the mashing and blending goes on, in a big bowl, I look at the menu, which offers lots of designer names.  Oscietra caviar is Petrossian (wonder what my old friend Christian Petrossian is up to these days?). Butter is Bordier, with little cones, carefully explained, of salted and unsalted. Charcuterie is Maxena Baud. Cheeses are Hervé Mons. The current issue of Travel + Leisure, so magnificently masterminded by the lovely Nancy Novogrod, has its entire April 2014 issue devoted to foods of the world – a much simpler lesson is merely looking at this menu. 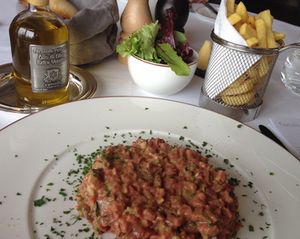 The tartare arrives, with truffled fries in a little wire basket – another side salad arrives (will I turn into a lettuce?). The sommelier arrives, to explain that he would probably pair this tartare with Chambolle Musigny Dme M. Gros 2011, which is not too oaky. I make my second definition of what makes an outstanding luxury ski resort today, at least in Courchevel 1850 terms – it must have an amazing wine list.  Here, if I had come, say, from Almaty, Baku or even Moscow and I felt like impressing with Champagne, I would order up a 2002 Jereboam of Cristal, and hand over €19,900.  If, on the other hand, it was time for red wine, I could always ask for a magnum of Pétrus, 2005, for €20,000. 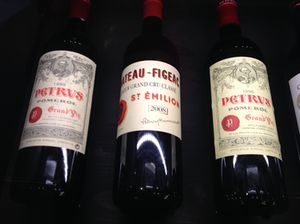 But today it is water only, as there is work to do.  A platter of totally delectable raspberry macaroons comes with my espresso, together with little cellophane wraps of brown, or white, sugar crystals (we talk about how appalling it is that so-called ‘diet foods’ cut back on fat at the expense of ladling in yet more sugar, and I vow never again to go for low-fat yoghurt but stick to the whole thing).  On the way out of this fledgling luxury hotel, already so well established, I pass a display of some of the wine bottles – and I vow never again to go for plonk, but stick to the good stuff. Duarte Bon de Sousa waves goodbye, and says ‘we’ll meet again’, in Cannes for ILTM.