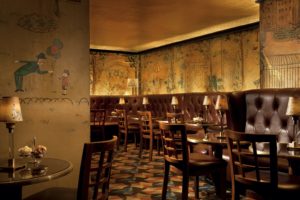 Travelling the length of central New York is somewhat akin to spanning the poles, and having made it south the gal had to head north, to the magnetic appeal of the Carlyle. This is the weekly home of Woody Allen who plays every Monday, and nightly, it seems, of local Upper East Side residents who throng to Bemelmans Bar – the image here is absolutely wrong as every day, from about 4.30 pm on, it is such a throng that servers have to push and shove in a most un-luxury way to get through. The gal was a little taken aback . Game of Thrones has nothing on the little scenarios going on here simultaneously. You have a feeling that Ludwig Bemelmans, 1898-1962, the illustrator whose likenessses adorn the walls – see Madeline, above – would be sketching many of the customers here. 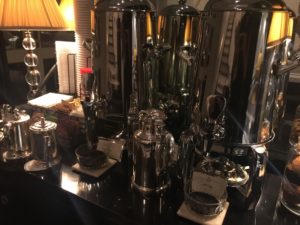 Elegance is a coffee set-up

The Carlyle is a way of life for so many, with the percentage of repeat guests nudging the 70s. As well as taking those staying in the hotel rooms, the elevator attendants also have to ferry residents who live in the owned suites above (oh, if they could tell their stories). Every night, as well as activity in the bar, there a show, or perhaps two shows, in Café Carlyle, where integral dinner is purely a set meal. Those who want to talk will probably head for the considerably quieter Carlyle Restaurant. They might choose, as I did, Carlyle Classics, in my case thinly-sliced smoked salmon with capers, onion and pumpernickel, followed by Dover Sole meunière, presented and filleted table-side. 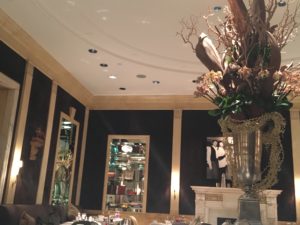 There are so many traditions here that regulars would be appalled if too much was changed (even though it is seldom used in these days of declining hand-written letters, an ornate letter box sits between two of the elevators, in the main lobby, ready to receive missives dropped into the vertical tube on any of the floors above). Some Carlyle-ophiles may well be a little dubious at the thought of Tony Chi re-designing the bedrooms but, having seen two mockups, I was pleasantly surprised, and the lacquer and sumptuous fittings are pure Manhattan of today. But do not expect old-fashioned items to disappear altogether – see the samovars that hold the complimentary coffee available in the lobby from 7 a.m., just when breakfast starts, by the way. 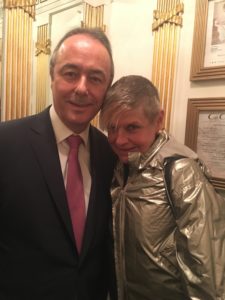 Breakfast here is a delight. One restaurant room becomes a discreet buffet, not visible from much of the room, and of course, as should be the case in all luxury hotels, everything was the best – it was tempting to gorge on yet more smoked salmon. Later, coming down in an elevator, I coincided with hotel MD Tony McHale, who had told me how happy he is to be in such a classic and cosy environment. Finally, too, I discovered a plus to having an operator in the cabin. He was able to take our photo, once he had taken off his white gloves, of course.