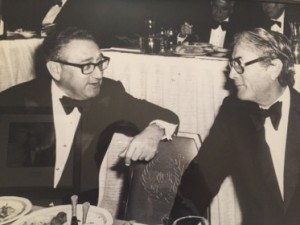 A meeting of classy glasses, H. Kissinger and G. Peck

Fascinating what the gal learns as a result of a lifetime’s immersion in luxury hotels. One of the many hundreds of framed black and white photos adorning upper corridors of the 1,415-room hotel shows Henry Kissinger and Gregory Peck at a Friars Club dinner in the Waldorf Astoria New York’s Grand Ballroom in 1980. The Friars Club is one of New York’s private clubs, founded in 1904 for Broadway theatres to network with PR people, then called publicists, to find out which of those wanting free entrances to shows are in fact frauds. The Club, now headed by Jerry Lewis and Freddie Roman, has regular celebrity roasts honouring someone, in this case Dr Kissinger. 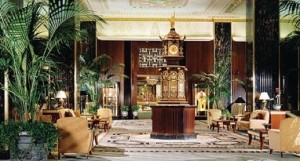 I also learned, from those photos, that Anderson Cooper’s mother, Gloria Swanson, had a mouth like an open letter box, and the exiled Edward VIII and his wife, Wallis Simpson, looked more than a picture of misery when dancing together. But, far from misery, to happiness. I was to meet, by ‘the clock’, someone whose enthusiasm and passion for life is 100 percent infectious, the current MD of the Waldorf Astoria, Ronen Nissenbaum. The clock, by the way, was made for Chicago’s World Fair in 1893. The entire hotel is full of such treasures – I am sure they will be retained when the new owners, Anbang Insurance, renovate, as they have promised (it is rumoured they will turn some of the hotel into residences). 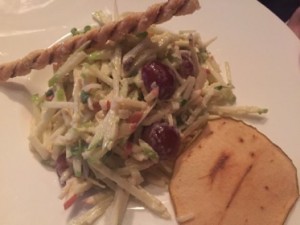 Another treasure is the Bull & Bear, a stock exchange haunt since it opened in 1960. Enter from Lexington, or from the hotel, and there is a 20-foot circular bar with regulars discussing business at the counter’s chairs.   Go through the bar and into the dining area and it is just what I expected. Dark wood, leather seating, lots of bankettes, lemon table linens, white china and highly efficient servers. I suspect the menu has changed little over the last 55 years. A signature starter is Waldorf salad, here with apple juliennes and celeriac, walnuts and truffles. It was invented here by legendary Md’ Oscar Tschirky, who also thought up veal Oscar. This place is full of firsts. 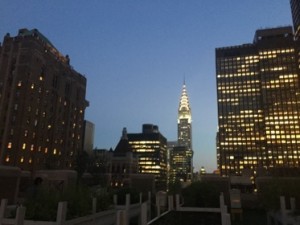 There are many other luxury hotels who have beehives on their roofs but this has taken it to extremes – it has over 300,000 bees, and the 20th floor terrace, astroturfed to make it the size of two tennis courts side on, also boasts a working herb garden. In addition it has one of the lovely night-time views in Manhattan – see the illuminated Chrysler Building in the photo. Exactly contemporary with the Waldorf Astoria as it is now, the Chrysler Building was, for 11 months of 1930-1931, the world’s tallest building, until it was eclipsed by the Empire State Building, which just happens to stand on the site where once two hotels, the Astoria and the Waldorf stood (they were pulled down to make way for the Empire State Building, and were rebuilt as the multi-towered one we see it now)