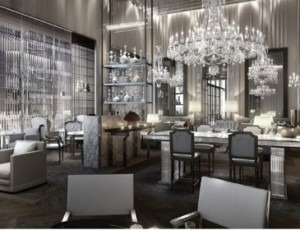 Looking along the Grand Salon

Barry Sternlicht is by far the most creative hotelier of the 21st century – so far (roll over Andre Balazs and Ian Schrager and even Robin Hutson). Barry Sternlicht created W Hotels and now, heading his own SH Group, he gives birth to two luxury hotel brands within three months of each other. His Baccarat Hotel New York opened its doors this March, a $220 million investment on the site of what was West 53rd Street’s public library. Of course, as one would expect, it is full of Baccarat, even down to tooth glasses in bathrooms of the 114 bedrooms.   Pride of place from the interiors viewpoint is the second floor, US style, Grand Salon, an exquisite confection of white and crystal. 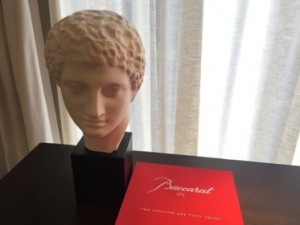 Statue and Baccarat book in room 1207

The bedrooms, which are selling for a starting price of $1,000, US of course, are heavenly. Look through from the all-white bathroom through the shower, and a glass wall, to the bedroom (a modesty panel can be pulled over that glass wall). There is colour. See the history of Baccarat, going back 250 years to 1764. Open the lacquer-fronted refreshment centre and inside, a scarlet lacquer chest opens to reveal – Baccarat glasses. Mostly, however, it is white-and-light, even down to the perfect white feather, a quill that is handle of the bedside pen. Even the toiletries are Baccarat, by the way (made by La Bottega). 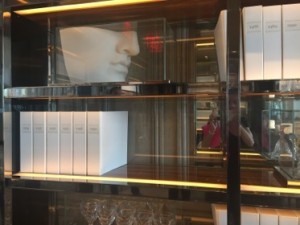 The library has 250 books for creative writers

One happy guest has so far already checked in 11 times. Does he, I wonder, leave a message every visit for the subject of his affections? See these white books in a corner of the Grand Salon. There are 250, each with a year on the exterior, one for each of Baccarat‘s lifetime. Inside, pages are numbered, but empty. Already the creative write a note, say on page seven of year 1995 – that author then tells, say, his lover ‘go to the page of your birth’, say July 1995, and there is a message saying ‘will you marry me’? And then, of course, they will go downstairs to Baccarat restaurant, one wall a LED-ballet of colour moving over hundreds of Baccarat glasses set flat, on their sides – Shea Gallante’s food is exquisite modern French and the Rudolph Le Meviette butter gives Bordier a run for his money (I was with Baccarat’s Australia GM, Andrew Turner, and his Dutch counterpart at 1 Hotel Central Park, Hans Schaepman, and we actually ate the butter just by itself). 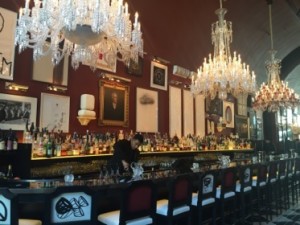 View along the main bar

Or perhaps the happy couple, like so many, repair to the bar leading off the Grand Salon. It has a terrace, with real trees. It has an area with a wooden chandelier, and a wall of broken tree bits, but this is Parisian designers Gilles & Boissier breaking out from their norm. The main bar is, well, exquisite. Is this the only luxury hotel which has three Baccarat chandeliers, the one on the left all crystal, the middle one with one single ruby drop, the one on the right with all-ruby drops?