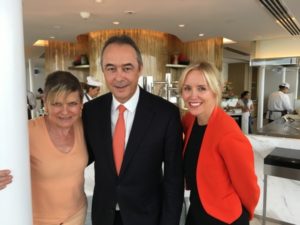 It is virtually impossible to do justice to Burj Al Arab, Dubai’s iconic shape which is, arguably but persuasively, called ‘the world’s most luxurious hotel’. Why? asks the gal. On all previous visits it has been more than spectacular. But look closely at the image above, taken from the bar on the boardwalk out to Pierchic restaurant, half a mile away. Yes, there IS something that appears to be floating behind it. In fact it is an extension, made in Finland by Admares shipbuilders, and floated here, to be put on top of 90 steel piles sunk deep into the seabed. The platform is 100 by 120 metres, and it will offer two swimming pools, one fresh and one seawater, plus, around them, 32 cabanas and 400 loungers. There will also be Scape, a 150-seat restaurant with an adjacent 120-seat bar-lounge. Wow. Expect a report when it opens, shortly. 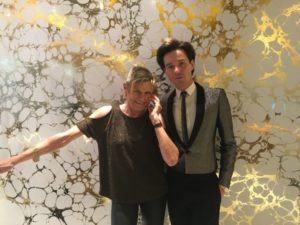 Oleg Kafarov in Gold On 27

But there is so much new here, and Tony McHale, who runs this dream, and his colleague Niamh Keohan, both talked nonstop telling me what has happened and what is happening. Last time in town I had breakfast in a sort of café, admittedly done with Burj style but still a café. Now that ground floor space, Bab Al Yam, has been re-imaged by GAJ Designs to make a really stylish and airy casual dining place, with a pizza oven and all-wall windows looking out to sea, and to the new extension. Soon the hotel’s main fish restaurant, Al Mahara – the one that famously winds around a ceiling-high glass-sided aquarium with over 2,000 fish – will close June 4th, 2016, for a Kristina Zanic new look (the fish have to be moved to another ‘fish hotel’). Already, however, there is a stunning new bar, Gold On 27. Helen Elmettouri of Keane Brands has turned what were three meetings rooms, not surprisingly on the 27th floor, into a gold and white bar, with amazing views. 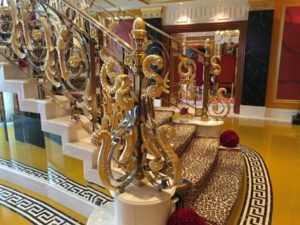 Gold On 27’s alcohol-free selection includes a ‘2020’ cocktail in honour of Dubai hosting a World Expo that year: 2020 turns out to be a mix of cassis, black peppercorns, coffee beans, spices and acacia honey, and to bring the point home it is described an ‘eclectic mix that highlights the benefits of working collaboratively to become even greater, a mirror to Dubai itself focusing on the city’s uniquely tolerant, multi-cultural population’. I actually drink a real drink, a basic gin and tonic, namely William’s Chase Great British with Fever Tree tonic. I notice the fruit nectars in the bar are Alain Milliat. Back in my room, by the way, I had a selection of just-pressed juices, specially for me, and enough berries even for me. OH the room, but what an understatement to call it that. This is the Royal Suite, and honestly, it is totally amazing. See the video below. 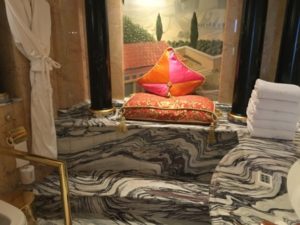 Still life in one bathroom

This is a luxury hotel that has always been over the top but somehow the present team has added even more aste – the only blue in a 7,900 sq ft two-floor, two-bedroom suite that is a nonstop kaleidoscope of pinks, oranges and reds with hints of beige and burgundy, and real gold of course, is the blue cover of the (outsize) room service menu. Everything else, with the exception of the silver of the two big standing iMacs, complements the overall palette. Honestly, I cannot even begin to do justice to this, the top suite in what the last Ultras deemed the world’s best hotel anywhere. SEE THE VIDEO.