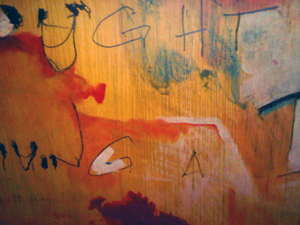 How about a wall theme? A WHAT theme.  A WALL theme.  Take Andaz San Diego, a lifestyle luxury hotel.  It is full of eye-catching walls.

Premium Suite 637 had some plain concrete walls, simply painted grey (pull back the drapes at one of the two windows and you looked out at heavy diagonal girders, also grey, about six inches away – look out of the other window and you look straight across Sixth Avenue to the Salvation Army).

Gm Rusty Middleton, a classic car enthusiast from here, southern California, has fortunately and kindly provided a running map, up to the zoo.  Yes, San Diego Zoo is justly famous – it is they who sent their female Swan Whisperer to spend ten days swimming with the trio of swans at Hotel Bel-Air to help calm the birds’ nerves after the hotel’s re-do. 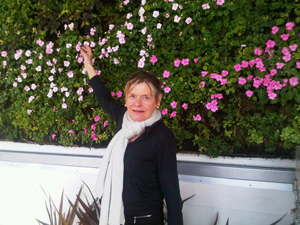 Actually there is a pretty nerve-tingling painting, all of 24 by 24 feet, on the wall by the 34 steps from the lobby (woven-leather columns) down to the basement, of which more anon. Can’t Stand A Day Living Without You is intricately written into this splashy, modern-art painted poem by Dana Lee.

This 159-room hotel (one of Hyatt’s Andaz brand) was put together by its young owner, Michael Kelly, who also owns Earl Scheib Paint & Body car painters. Does he have his cars decorated like this, I wonder?

More walls, Andaz style.  Tucked away on the rooftop (more later, again) is a living wall. It is pea-size compared to the papaya-size of the world’s largest living wall, at the Oberoi Gurgaon which I will see when in Delhi next month. But this, here in San Diego, is perfectly tended, quality rather than quantity, gal. 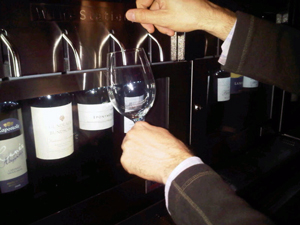 Insert your chip card, and put a glass under the appropriate bottle...

And one more wall.  Several places have oenotech machines (think Fairmont Pacific Rim in Vancouver) but this one is mega. Ivy Wine Bar has one long wall of 80 inverted bottles, and credit card slots.

Get a special, pre-loaded chip card, insert it into a slot, put a glass (free!) under the required bottle and press the button.  Hey presto, this is do-it-yourself wine-tasting. The Eponymous 2007 was delicious.

Andaz opens a Katsuya (Uechi) by (Philippe) Starck restaurant in February, when happy diners will be enticed to Crispy rice with spicy tuna, and a variety of sashimi and sushi. 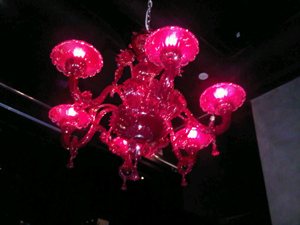 Until then, that dining space is closed, so we had a more-than make-do down in the basement wine cellar – the alternative would have been raid-the-minibar, half of the contents of which, including some snacks, are complimentary – like the wifi.  This place does not nickel and dime, said Mike who had taken us up to the room.  Bliss.

The darkness of the wine cellar’s wine cabinets and wood furniture was highlighted by a fuchsia dayglo chandelier, similar to the yellow dayglo one Starck has put into the spa at Viceroy on Brickell, Miami – but this one is not Starck.

Look what a burst of dayglo pink does, as I found a couple of days ago at the inner-lit sidewalk tables on Wilshire, outside Beverly Wilshire Four Seasons in Los Angeles. 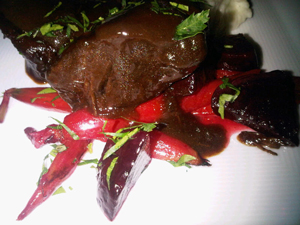 Here in San Diego, straight from the bottle, the sommelier poured King Estate Pinot Grigio from Oregon, and, from California, a Cakebread Sauvignon Blanc and a Ridge Zinfandel, which all went pretty nicely with Seared ahi tuna with green papaya, and Slow-braised local short-ribs with Yukon Gold potato purée.

I had been warned not to stay on the sixth floor at a weekend, when, above, the rooftop is ultimate party place. This was a weekday, and I slept like a baby.  We made our own party the following morning, at breakfast up there.

Until the sun arose it was huddle near Bordeaux burners, wrap a cashmere Alicia throw, from Villa Padierna, around the shoulders, drink coffee quickly before it turns to ice. Even as the sun came up the sky was clear and we looked round at San Diego’s historic rooftops.

The breads were arguably the best at any Southern California breakfast, from Sadie Rose artisan patisserie, and the coffee was as good as the Feurig I had made back down in the room. 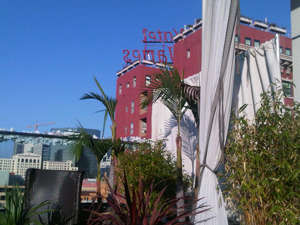 Looking around at breakfast, Andaz rooftop

Next time, perhaps, weekend party time here?  The rooftop has a 45-foot heated pool, and large glass-filled fire pits, and white columns and balustrades (and colour from that living wall).

On October 8th, 2011, Prince Harry was brought here with friends.  He liked the party so much he returned the following night, and stayed over, which of course attracted paparazzi and images of him leaving – even a baseball cap cannot disguise that distinctive orange hair – went viral.

Of course – everything he does does.  Remember how he decorated Wills and Kate’s going away car at The Royal Wedding?  Wonder if he, too, headed two blocks west for some of the best shopping in California, namely at the Nordstrom in Horton Plaza?