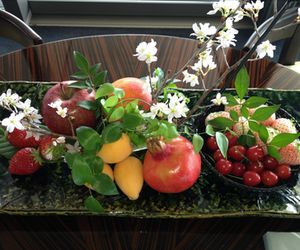 Palace Hotel Tokyo caused a stir when it re-opened May 2012 as it had been completely rebuilt.  Once the forestry office of the Imperial Household had stood on this spot, and the ‘old hotel’, pulled down in 2009, was super-luxury when it opened in 1961.  Now, designed by architects Mitsubishi Jisho Sekkei, it has 297 rooms, over half of them with balconies, and all, without exception, have the closest views of the Imperial Palace.  The gal arrives, and is immediately awestruck by the beautiful art.  One white wall behind a reception desk, for instance, is actually formed of artificial marble, crystal powder and typing correction fluid (this is a piece that artist Shinji Ohmaki calls Echoes – Crystallization). In end suite 2221, an art display of fruit decorated with cherry blossom is a reminder that the supposed start of spring was on March 21st, 2014.

There is cherry blossom all over, including cut pink and white sprays in my room – look how tiny origami birds match the blossom. So Japanese, to go for perfection. The main carpet is blue with inset, as if a separate entity although it is all woven as one, a round-cornered square cream carpet, with cherry blossom patterns. Cream blinds come down vertically, when required. The minibar is hidden in a six-foot white lacquer cabinet with silver handles. Above the sofa are three brown-framed white paintings, each a 500×500 cm square, each showing what looks like a white sand shell  – artist Yuko Nishimura has deliberately evoked origami shapes. 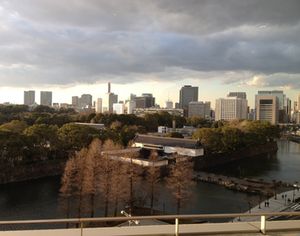 View from the balcony, over the Imperial Palace

But OH the view. From my 22nd floor temporary home, I look directly west at the Imperial Guard Headquarters, with, to its left, the green peaked rooftops of the actual Imperial Household Agency, where the Emperor and Empress live (other members of the Royal Family, including the Crown Prince and Princess and their only child, Princess Aiko, live elsewhere, and under the Imperial House Act of 1889, Princess Aiko cannot succeed to the throne). You can visit the Imperial Palace East Gardens daily, except Mondays and Fridays, and twice a year, January 2nd and December 23rd, you can visit the inner palace grounds and generally see members of the Royal Family.

Bliss, a bike was all ready, and an English brand, a Raleigh.  They offered a backpack, and water, and off I set, to cycle round the perimeter of the Imperial Palace walls. Going clockwise, I headed first to Sakuradamon and slightly uphill to the JCII Camera Museum.  Near the UK embassy I took a sharp right, heading east to the National Museum of Modern Art, and then right again to Palace Hotel Tokyo. There was just time for a quick work out – the gym has lovely views looking into the Palace gardens. It is open, fortunately, 24/7, a terrific boon when you have an early flight. Tonight, after all this exercise, I headed down first to the club lounge on the 19th floor, to find an extremely generous display of drinks.

Drinks in the club lounge…

Back down on the ground floor there is a lobby lounge casual restaurant. This leads to the Grand Kitchen restaurant, with display kitchens, and a white conservatory with living wall, and outside terrace seating.  The inside area has a two-way gas fire, lit from below: on the wall above, one side, is a six-foot diameter crown of piano wire, which artist Yonezo Hirano says is hard, strong and cannot easily be bent.  Most restaurants, however, are on the sixth floor. We are eating Kaiseke, a traditional multi-course meal, in Wadakura. We sit in a PDR, private dining room, with one glass wall and the others, like the floor and ceiling and table, light unvarnished wood (the floor is gently waved to give a sensation of walking on sand, if you are shoeless). 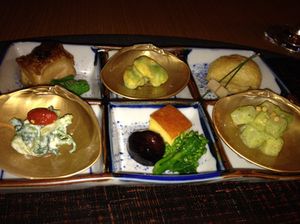 .. and one of the exquisite Kaiseke dishes

The Kaiseke has, in order, delicacies, clear soup, sashimi, more delicacies, grilled dish, small dish, simmered dish and rice and soup. This is not fast food. The first delicacies plate, show here holds bamboo shoot and udo with miso; dropwort (Rosaceae) with white salad, beans, mustard and vinegar; inari sushi (a fried tofu pouch, named for the Shinto god Inari, though it is sometimes known as brown bag sushi); omelette cube with bean and rapeseed; grilled chicken with Japanese pepper.  The sashimi morsels come balanced on a six-foot length of bamboo trunk that is skilfully put down the centre of our table – it is amazing that these kimono-clad waitresses do not get the fabric sleeves caught up. 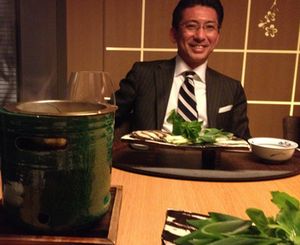 My favourite, I must confess, was the simmered dish, abalone shabu shabu. We each had an emerald-clad stove bearing hot broth. We also each had separate ceramic dishes of slices of raw abalone and vegetables.  Cook as long as you like…  in our case, sadly, we had to shorten the meal somewhat as I had an early start.  I bade my lovely dinner companions good night and headed up. At 4.25 (a.m., please note), I came back down to the lobby, to leave this serene luxury hotel, to find its GM, Masaru Watanabe, waiting to say goodbye – well, he had said that he is married to The Palace Hotel but really, this was amazing.  I am tempted to ask the President and CEO of The Leading Hotels of the World, Ted Teng, if farewelling guests at 4.30 a.m. is a new ‘standard’…