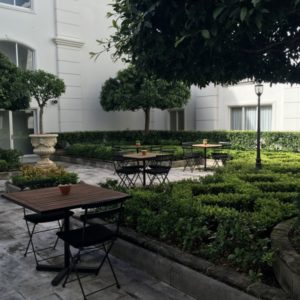 Even though it was still technically winter it was a lovely sunny day in Sydney – look at the couples dancing in the Botanic Gardens, above. Much to the gal’s surprise, InterContinental Double Bay has a gorgeous garden too. This is the 140-room hotel that opened in 1991 as Ritz-Carlton and, being in the chic Double Bay area, it had masses of important events, including lots of bar mitzvahs. Then it became a Stamford hotel, and it had no upgrading and no coats of paint and it looked sad, very sad. It closed altogether in 2014, and the locale suffered too (apparently house prices dropped). Now it is once again a glorious luxury hotel, terrifically popular. 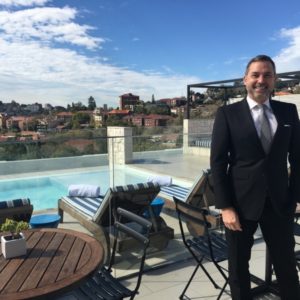 Paul Walters on the rooftop

The GM, Paul Walters, is a would-be accountant who found that rather boring – running a hotel is much more fun. He came here from London, where he ran the Langham, and it is good to be ‘home’, he said, particularly since the re-opening of the hotel in November 2014, with its new brand and a new look (by Bates Smart) in shades of grey, with white, and some stunning art, which has revitalised the whole of the Double Bay area. His Boutiques along Cross Street have regained business, and it is all very satisfying. His sixth floor rooftop is divine, with a sizeable pool, lots of sunbeds, and views that make it an ideal photo-shoot location. 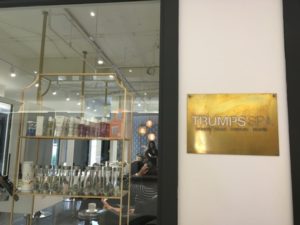 In fact this hotel is very very clever. It has a ballroom for 350, and offers the only kosher kitchen of any Sydney hotel. It has a bar with over 100 gins. As well as its own restaurant, the hotel’s owner, Bobby Hirandandani, a great foodie himself, has installed right next to it what could well be Sydney’s best Japanese restaurant, Saké (Paul Walters has one New Zealand hotel guest who flies over regularly just for the sashimi in Saké, where hotel guests can sign, incidentally). Opening next to Saké, next month, will be a Hirandandani-owned steakhouse, and his empire here also includes a super 24/7 gym, really big, and a spa, somewhat amusingly called Trumps. 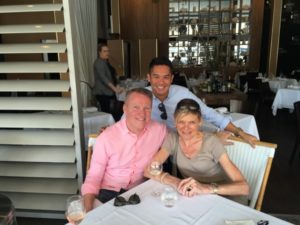 Steve, in pink, and Jay, at Manta

Actually I had two days of great Sydney lunches – the other was with my dear friends Steve Odell and Jay Valleramos at Manta, along the Finger Wharf at Wooloomooloo that is side by side restaurants (SEE THE VIDEO OF MANTA, BELOW). Of course we started with oysters and a glass of bubbly (and I went on to a barramundi). It was rather weird, actually, knowing that just at our rear, so to speak, had once been a luxury hotel. The old wharf building, which was built to store fleece, opened in 2000 as W Sydney, and then it was bought by Taj – not one of that great company’s finest moments; the property, with cavernous public areas and tiny duplex bedrooms, struggled as a Taj. Now it is the Ovolu and it has, I am afraid, dropped off my radar, exactly the opposite of the Double Bay property, today the super-duper InterContinental Double Bay.