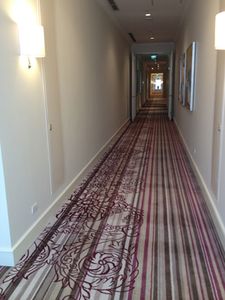 How to distinguish which hotel is which when both are in the same block? One way is the corridors, says the gal.  The luxury Manila hotel that is Raffles Makati, on the ninth and tenth floors of the 30-floor block that also houses Fairmont Makati, has slightly wider corridors and the ceilings are 50 cm higher.

Carpets along the 110-metre main corridor are pale grey with, from end to the other, darker grey and soft burgundy stripes, and outlines of arabesques. Whoever laid that carpet got it absolutely straight, not the slightest wiggle.  Perhaps they can lay carpets by computer these days. 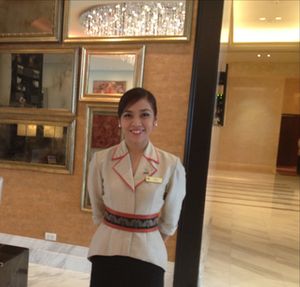 Each hotel has its separate main-floor entrance.  The lobby of Raffles is big and light, with palest grey marble, and you look through an open bookshelf to The Writers Bar beyond.  Behind the reception desk, which is a sit-down thing, are lots of mirrors, with different shapes of frame.  The ladies working here wear the chicest uniform, designed by Rajo Laurel, that would not be good on the typical English female as you need the kind of waist that two hands will fit round and touch fingers: pale lemon silk jackets have thick belts, sealed at the back.  Gosh they look chic. 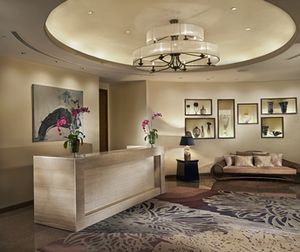 Raffles has only 32 rooms, all suites with wood floors, and lovely silk curtains, and more mirrors and art in silver frames. It is butler service.  Ask for more stationery – for some reason they only gave me one piece of notepaper and one envelope – and supplies are brought on a silver tray. Head for the fourth floor Willow Stream spa and it is similarly stylish (it is shared with Fairmont Makati, as is the gym and the outdoor pool on this floor).  Raffles also has its own, alternative pool, also outside but upstairs on the ninth floor terrace. 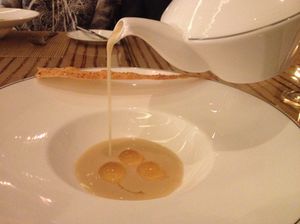 The ninth floor will also see a new restaurant, La Cuisine, opening soon.  This, says Christian Knerr, chef of both Raffles Makati and Fairmont Makati, will have simply fresh food cooked imaginatively.  He does a mouth-watering tasting for us.  Family-style entrée starters include dishes of asparagus with shallot and goat’s cheese, ratatouille with feta, salted cod croquettes, green lentil salad, burrata and pesto, warm prawns with olive oil, and quinoa and orange salad.  Next comes a white tomato soup.  First tomato water beads, looking rather like bathtime pearls, arrive in a bowl, and then the soup is poured over.  The meal goes on to choice of main course, and finishes with calamansi cheesecake with fresh berries. 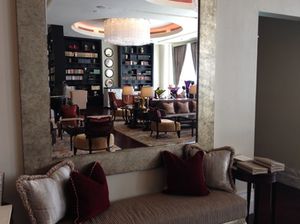 We missed out on afternoon tea in The Writers Bar.  I am sure it was splendid.  I think about the afternoon teas I have missed around the world, including all the Raffles afternoon teas, in Siem Reap, after touring Angkor; in Phnom Penh, after touring the Phnom Penh museum that should definitely be visited after having seen the Angor temples themselves (a travel tip here, definitely visit Siem Reap before, rather than after, the Cambodian capital). Then there could have been Singapore, after shopping in Raffles City Mall, and Dubai, after shopping in Wafi mall, and Paris, where Le Royal Monceau Raffles has two such good boutiques, at its concierge desk and at the separately-run Eclaireur, right on avenue Hoche. 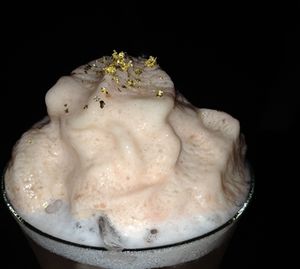 One thing I would never miss in this luxury hotel, right at Manila’s Ayala triangle, is a return to The Long Bar.  This works so well, with its fans waving back and forth from the tall ceiling, and a pair of boxing legend Manny Pacquiao’s gloves sensibly framed behind glass (Filipinos are mad about boxing).  It does not matter if you stay here, in Raffles Makati, or in Fairmont Makati, on separate floors but in the same building.  You can share nearly all the public facilities, which include The Long Bar, perfect for another Makati Sling, topped with Angostura Bitters foam, on which top of which real 24ct gold flakes are liberally dispensed.