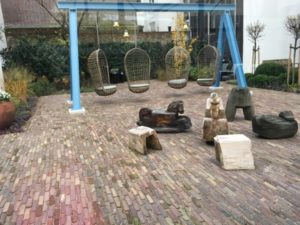 There are some clever ideas at The Pulitzer, Amsterdam, a hotel that is now entirely independent – for many years it was part of Starwood. Now this luxury hotel stands on its own two feet, with the help of Preferred Hotels & Resorts. Its history is that in 1970 Peter Pulitzer, a descendent of Herbert-of-the-prize, was asked by KLM to sreate a hotel suitable for the airline’s first class passengers. He bought seven adjacent merchants’ houses along Prinsengracht canal and added more so that now the luxury hotel is a jigsaw of nearly two dozen houses, some of them actually on parallel Keizersgracht canal. In between there are several courtyards, one of which is a kids’ playground, Dutch style. 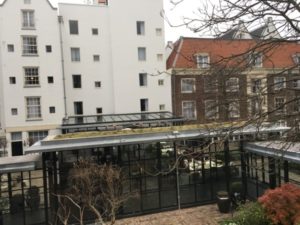 View from the Pulitzer Suite

The Prinsengracht Suite, up 13 marble steps from a main lobby, looks out on to another courtyard (see the video below). The entire hotel has been reimagined by a young designer called Jacu Stauss, who has found antiques, bought modern pieces and designed others himself. He has an amazing creative mind. Outside the main Prinsengracht door, or rather between the outer and inner doors, is a display of blooms that are colour-coded. Yes, this is a working flower boutique. Overhead, deliberately askew, hangs a full-size grand piano. Come on in to the lobby and the three standing-height reception desks are entirely Delft tiles. 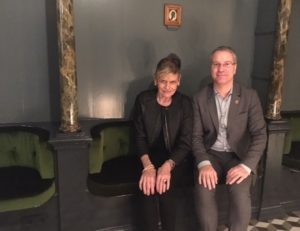 Among the total 225 rooms are four speciality suites, with their own front doors on Keizersgracht: one is the Book Collector’s Suite, and real books form an arch up with side of, and over, an inner door. The main entrance to the hotel’s Restaurant Jansz, by the way, is also on this street, which is part of the Negen Straatjes, Nine Streets, historic part of town. You come in through what was formerly an apothecary, and then to the restaurant, which is of the plain wood floor (endgrain as used in mediaeval warehouses) and plain wood tables and working kitchen variety, and very good it is, too. Best-selling starter is braised meatballs with marinara sauce but I loved my burrata with different colours of heirloom tomatoes, and I went on to a hanger steak, chopped into bite-sizes with bits of Jerusalem artichoke. 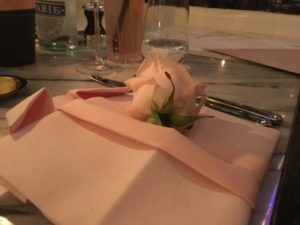 An impromptu pink rose ‘put to bed’ in a restaurant napkin

I hear how the hotel commendably partners with Plastic Whale, which makes cleaning local canals into a fun activity – as with local companies’ team-building canal-cleaning outings, hotel guests really appreciate learning more about the city’s geography while, wearing protective gloves, they are in a boat, made from recycled plastic, fishing for discarded bottles. Everyone working at this luxury hotel, led by GM Alex Van Gastel, is really lovely, enthusiastic, professional and empowered – as we were sitting pre-dinner, enjoying glasses of Chilean wine, Leyda Pinot Noir 2015 Rapel Valley, one of the servers discreetly laid a rose in the folded napkin awaiting two women about to come in from the bar (the servers, by the way, wear white shirts, jeans, Convers trainers, and weird aprons with beige upper half, pine green skirt-half). Another example of empowerment was when I called down to see if there was an extra standing lamp. Within ten minutes the housekeeper personally led a posse of three, all carrying gigantic lamps as tall as themselves, which, since the Dutch are the tallest people in the whole of Europe, is no mean feat. NOW WATCH THE VIDEO OF MY SPACE