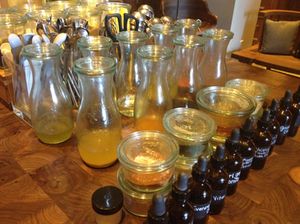 Part of the apothecary table at the spa

This is a closeup of what looks part of something at Hogwarts, a classroom for Harry Potter and friends to create potions. It is, indeed, a table, about 20 ft long, completely filled with jars and open glasses of squashed avocado, or guava paste, or lemon juice and so on, and it is for Jackie Yulo, the very elegant spa director at Maui’s newest luxury resort, Andaz Wailea, and her colleagues to concoct.  Everything they do at this amazing spa, Awili, which suitably means ‘a blend’, is customised, says the gal.  Andaz opened September 2013 and it attracts the most beautiful of the Beautiful People who head for the Wailea strip, highway Makena Alanui. that runs south from Kihei to Makena.  And they like it here, for its people, its free day-time valet parking (and free non-alcohol minibar and much else) – and for its design. 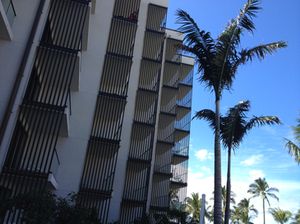 Outside, the building is sleek, white and glass, with vertical barricades for balconies that give a futuristic look. There are 290 rooms and somehow the lure of Wailea coupled with the Andaz-Hyatt brand means they are sometimes all full.  Like now.  So sorry, the one room we had to show you has now been taken…. These beautiful people arrive in straw panamas for the girls, and baseball caps, unfortunately sometimes back-end-on, for the guys, and the top fashion of 2014, a sleeveless T-shirt, full length to terra firma and brightly striped, horizontally, so you know you need to be a Zero queen to follow this style.  Oh yes, you have designer sunglasses, a big designer beach tote and flat gold sandals. 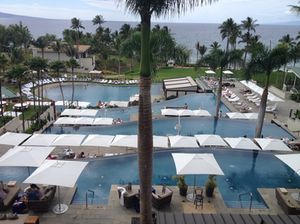 Look down, at some of the hotel’s pools

This is a hotel that is all about water.  Yes, Mokapu Beach is right there, with 600 ft of private sand (you get there by crossing the coastal path that stars here, and runs south beyond the Fairmont).  As you can see looking down from one of the upper levels, however, there is almost a cascade of public pools, including at least two that are not shown here.  There is a pool for tranquillity, a pool for rough-and-tumble with the kids.  There is even a pool near the spa entrance that reminds me of The Siam Kempinski in Bangkok.  In both hotels, some lucky guests on the ground floor can step straight down into water, and swim one way, or the other.  Here, Andaz Wailea’s pool suites are called Andaz Suites. 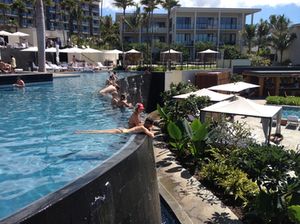 And one of those pools

A lazy day here, one of the typical-six, would revolve around the water, ideally with intermittent trips to the spa.  Because of the water, this is romance plus wedding-ville.  The only negative is that you cannot bring Fido as all pets have to be quarantined before they are allowed into Hawaii.  Coming the other way into US mainland, by the way, the only thing they seem to encourage you to take is pineapples.  Help the export trade.  They also definitely encourage you to take away memories and do their marketing for them. 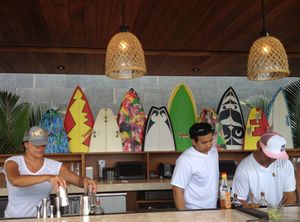 Take a break from your lazy day to have lunch, or dinner, at Morimoto, yes, the second one in Hawaii and the only one here on Maui.  Sit outside on a terrace, watching the activity around the pools.  Do make sure you start with Morimoto’s divine thin-as-paper tuna carpaccio pizza, with jalapeño: it comes divided into six, so it makes a lovely appetiser for two. We were just going on to sashimi when oh goodness, here we are, action time.  Every Saturday at 1.30, two of the hotel’s bartenders battle it out, by process of elimination, to find out who will be head barman. 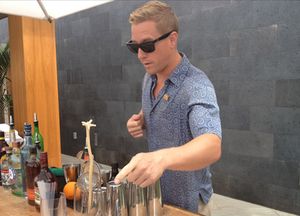 Taking part in the bartender competition

They have ten minutes to design something, with a name, from a box of mystery ingredients. Judging is by three guests, spur-of-the-moment, who mark for professionalism, personality and drink.  Ben and Joe are competing today. Both obviously really want to be head barman of this luxury hotel.  The beverage director is a brilliant emcee, with mike so everyone can hear.  Interestingly one of today’s judges is head brewer at Stone Brewing Co in Escondido, southern California’s biggest micro brewery, founded 1996 by Greg Koch and Steve Wagner – and one of their beers is in the mystery ingredients.  The noise level is rising… oh dear, I have to leave.  Later I hear Joe won.