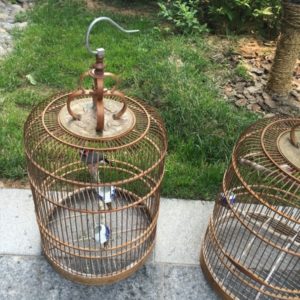 Song birds outside the front door

Kempinski, which prides itself on being Europe’s oldest hotelier, has a sibling, one of the world’s newest brands, NUO. This was originally devised by Landor but the details and personality have been instilled by a Swiss hotelier enticed from Shangri-La, Adrian Rudin (see him above, in the lobby). He is in his element: exactly one year after opening, the 438-room NUO Hotel Beijing is TripAdvisor’s top hotel in town, #1 out of 5,863 properties in Beijing. There are some traditional Chinese elements, like real songbirds in cages in the small outside garden, but in the main the culture is China + Luxury + Contemporary + Green. 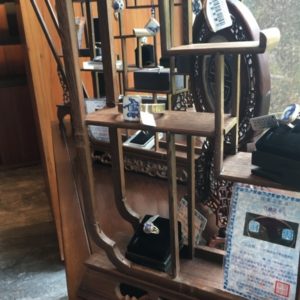 Forty-two hand-thrown ceramic teapots, each in its own bookshelf slot, greet you as you enter the tea parlour off the main lobby – nearby are displays of covetable collectables, belts and earrings, all bearing a unique bit of genuine Ming Dynasty blue and white ceramic, shattered by historic vandals. There are ceiling-high blue-on-white ceramic panels, new, interspersed with grey silk and silky smooth wood to form corridor walls on the upper floors of the 28th floor hotel. Bedrooms are fabulous, with all-wall windows (ask for a room with windows that open) and motion-control light ‘switches’, and ceramic-look tea kettles, and electric towel rails in the bathroom. 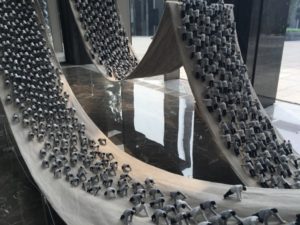 The spa entrance is like a cat’s cradle, a bamboo artwork called Rose, by Wang Gang (its nine nested bamboo cubes offer, apparently, a multi-dimensional relationship that explores the dialectical contest between freedom and order, finally resulting in a lamp blooming dynamic light). Each of the spa rooms, by the way, has two changing rooms, one for the person waiting to have a treatment, one for the person who has had it. Clever. Adrian Rudin is a man of many talents: he personally went sourcing teas, to produce the best-possible selections, from Dakeng, Huiyuan, Liulan, Liuxiang and Wuyuan. And he did the same for the art, in all areas. 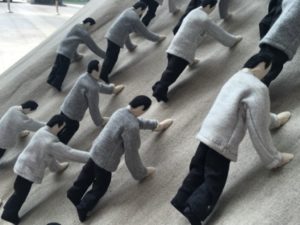 ..is thousands of four-inch puppets climbing up, and down

Back in the lobby, I admire yet again the ten, ten-foot ceramic pots, some hand-painted with soothing scenes. I love the Zeng Fanzhi sculpture, Le Shan, that Adrian Rudin is standing against. And I am totally intrigued by an artwork of tiny puppets, thousands of them, all dressed alike but slightly different faces. They are sewn on to two lengths of cloth, nine inches wide, so it looks as if they are going up, or down. This piece, by J.L. Wenyu and Zhu Weibing, is indeed labelled just that, ‘Climbing up the mountain, Climbing down the mountain’.   This is certainly a different luxury hotel and one that, I predict, will make waves, and far beyond China. Now watch the lobby video, below…