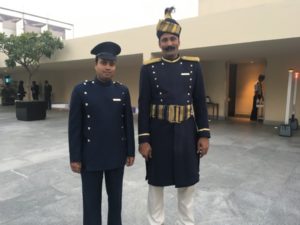 Yes, they are real

Between them, the Gurgaon pair of luxury hotels, The Oberoi Gurgaon and Trident, host hundreds of pieces of valuable Indian art, chosen by the Oberoi family with the help of gallerist Peter Nagy – see one striking piece, above. Sometimes I think, as with everything to do with Oberoi hotels, even the people working here look like sculptures that move: see the doorman and chauffeur to the left and the pristine whites of the chocolatier and baker, below right. The gal took a walk along The Oberoi’s ground floor retail arcade, which includes a Rosanna Ferretti hair and a deli. 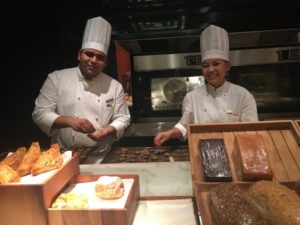 The deli is, in fact, almost a cake and bake café, and there were ladies-who-lunch enjoying mid- afternoon snacks: the individual lemon slices and tiramisu in preserving jars looked so delectable it would have been all too easy to add more than a few calories. The two specialists working here were decorating chocolate petits fours. Try one, they urged. Not now, thank you. I walked outside, and took the five-minute cut through to the Trident hotel. This is an all-time favourite, less aggressive than the straight-lined Oberoi. You enter past another decorative pool, same size as The Oberoi’s, but here at the Trident hemispherical cupolas rise above each of the four sides. 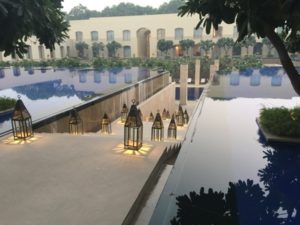 Walk as if down into a Trident pool

Carry on through the main building and down to another pool, which laps right up to the base of the windows of some of the 136 bedrooms: the architect here, incidentally, is Lek Bunnag. Back in the main building, I look to both left and right along long marbled corridors – there are big windows, but it is not all-glass, as is the case with the lobby of The Oberoi. Here the lobby soars up to a domed clearstorey, but actually soaring is the right word for this beautiful building. Having the two hotels right next to each other is a great help, says David Mathews, who used to run Trident but is now GM of The Oberoi. CEOs stay with him, while their deputies may stay here. (Trident GM Nitesh Gandhi was deemed city-wide GM of the year at the 2016 EazyDiner awards.) 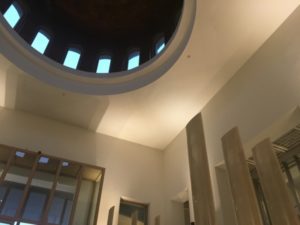 Look up into the Trident’s lobby cupola

And with that, it was time to move back from one luxury hotel to another, both busy not only with foreign tourists but with Indians, too – it is a weekend, so business people are not around. I opened up Love Delhi. There, in the introduction, William Dalrymple writes: ‘This fast emerging middle-class India is a country with its eyes firmly fixed on the coming century. Everywhere there is a profound hope that the country’s rapidly rising international status will somehow compensate for a past often perceived as one long succession of invasions and defeats at the hands of foreign powers”.  AND NOW TOUR THE TRIDENT, BELOW