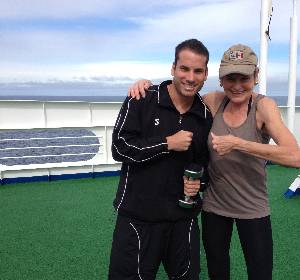 Personal trainers who are really good are few and far between.  In the luxury hotel space, the list has to be headed by the team at Bodyism at Bulgari Hotel London and by the guy at Le Negresco in Nice.   The gal also remembers someone at Hôtel de Paris in Monte-Carlo who, while running her at break-neck speed up and down the twisting roads that snake in and out of the billionaire-dense city somehow managed to share a few of the names of local sporting residents who can run twice if not three times faster.  Now my list of top personal trainers also includes Vlad Ronea, a Romanian former soccer star who is currently the fitness expert on the good ship Silver Cloud.

This luxury cruise ship, plying back and forth around South America (one fortnight Buenos Aires round to Valparaiso, the next in reverse, and so on), is actually full of fascinating people.  The hotel director is Birgit Ladlau, who grew up in her family’s small hotels in Austria.  The maitre’d, who somehow remembers every passenger’s name after day one, and knows who likes to dine with whom and who definitely does NOT want to dine with whom, is Portuguese Jorge Caeiro, who started on Silversea as a waiter, and worked his way up.  Tricks of his trade include a phenomenal memory for names, an omnipresent tiny note book in which he writes down ‘suite 720, table for six at 7.45’ and so on, and keeping fit.

Jorge Caeiro is a runner, a serious runner.  Whenever there is a day in port he takes off, ten miles along any coastline or up any hill, and back again.  Running keeps his brain alive, and his thoughts working.  He is sure of it, he says looking at your earnestly.  One of his close onboard colleagues is Judie Abbott, one of the world’s two best cruise directors (the other is a Portuguese polyglot called Fernando, who also works with Silversea).  Judie Abbott, real name Sheila Ward, switched her family name to be at the beginning of the alphabet.  Clever girl. Any busy traveller from the UK or USA is occasionally tempted to put down Albania as nationality as it takes so long to scroll down an alphabet, say when applying for a visa.

.. and Jim Dunn and a New Year partygoer..

Judie Abbott does an onboard show sharing some of her past.  She had been dancing and singing and singing and dancing and was suddenly given the opportunity to design her own show for the QE2.  She had to form a band and commission lyrics and at the last minute, she realised she had no spectacular stage clothes.  So she took swimsuits, and added capes and skirts and hundreds of yards of diamante, and acres of feathers that came from un-wound feather dusters. Onboard now she coordinates events, say the spectacular New Year’s Eve dinner, when there are a few feathers (a very few) on ladies’ tiaras.  Men have to make do with silver top hats that either obscure their vision or sit on the top of the cranium looking like a pimple.

Silversea is great at special events, especially on sea days when there is no port to visit.  One day at sea the main bar was transformed into the Red Lion Pub, with pub grub that included very plausible fish and chips (well, since the chef, Janine Fourie, is South African, that is not surprising – South Africa, along with England, New Zealand and Scotland, claims the invention of battering fish, putting it with French fries and mashed-up, ‘mushy’ peas and calling it fish’n’chips). There are formal nights, when all but a few social inadequates (unfortunately often British) realise that dinner jackets are more suitable than open-necked sports shirts.  Sometimes, in warmer climes, there are onboard barbeques.

Every night you can dine Italian, or do the haute cuisine thing in the Champagne Room.  And whatever the weather, the two hot-tubs steam and bubble away 24/7.   The surprising thing is that everyone on a cruise ship finds what they like, and forms a bespoke routine.  There are some, one is told, who while away the early hours of each day in the casino.  There are others, like your correspondent who, as if in a luxury hotel on land, anywhere, starts each day with a good workout, but here, at sea, later adds the fabulous sauna, and the outdoor pool, and the hot tub.