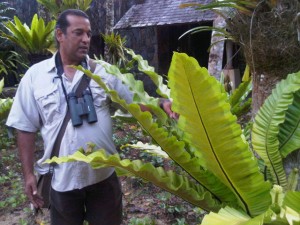 The gal knew, waking up in her Beach Villa at The Datai, that this was going to be a nature-loving day. First on the agenda was a nature walk with the amazingly erudite Irshad Mubarak.

This is a naturalist whose website junglewalla.com tells supposedly all, but does not reveal the tangents his conversation takes.  There were two of us on today’s walk – my companion was a skinny youth with a massively-fat photo lens.

As we walked through greenery with trees soaring nearly 200 feet, our guide explained plant relationships. 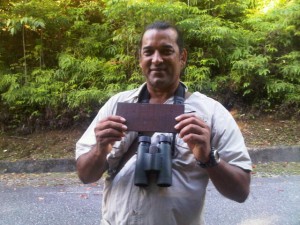 Irshad shows hardwood, hard enough for the base of F1 cars

There are epiphytes, that live on trees without giving anything back, or taking anything away (like lodgers who pay no rent, but do not harm the place, he said). There are plants that succour, say give nitrogen to some trees’ roots for synthesis (think lodgers who pay their rent on time).

There are also parasites, that kill the host (lodgers who refuse to pay rent and trash the apartment).  We look at cycads, palm-like trees that go back millions of years. Some cycads are females, with tangerine-sized hanging fruit: a few are male, with the occasional squirrel-tail-like protrusion. 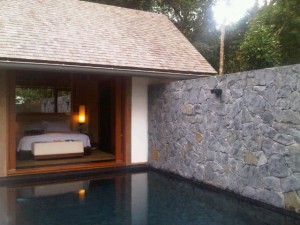 Looking across Beach Villa 1's pool through an open wall, to the bedroom

Mr Knowledge continues on to tree design, showing us drip tips on the ends of leaves so that water does not gather and block out light or weigh leaves down – and other leaves that are deliberately corrugated in cross-form, similarly to let the water run off.

We saw a few birds, including the mimic Hill Myna and Langkawi’s largest, a Great Hornbill with wingspan of nearly six feet. The highlight of this walk, however, was an introduction to Indian Iron Wood, 11th hardest in the world (Romans used such trunks in England’s Thames to support river bridges).

Mubarak explains that The Datai’s rooftop shingles are hardwood, to last forever, and all F1 cars have a hardwood base panel to prevent metal contacting the ground, and possible sparks flying.  This last fact, by the way, made Mr Skinny even more interested as he turns out to be one of Singapore’s most ardent Grand Prix fans. 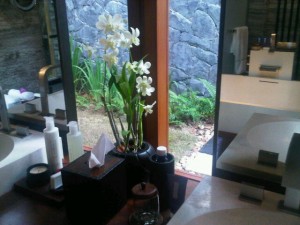 But back to those communicative tangents.  Mr Knowledge also goes constantly into evolution. Captain Bligh was desperate to protect breadfruit seedlings being transported from Tahiti, he explained (showing us a breadfruit tree). Back at sea, Bligh decided to use his last water supplies on seedlings rather than sailors, which led to the Mutiny on the Bounty.

At another point, our lesson in evolution included Alfred Wallace, Mubarak’s main hero, who stressed working together – he also believed that survival is flexibility rather than being strongest or fittest, which of course is so relevant in today’s life.

Life at The Datai, frankly, is a nature touchpoint a minute.  A family of epiphyte-like monkeys, playing on the far end of the terrace of the luxury resort’s main bar, does not harm, does not offer anything back, but I hear about a family of Dusky Leaf monkeys that now keeps away since the Alpha Male head of the family was excommunicated for raiding a minibar, though he left the alcohol. 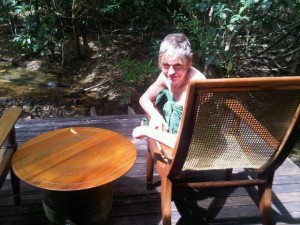 Waiting, already sarong-ed, on the terrace of a spa room

Several times during my stay there were three-foot iguanas (about a third of that length is tail) sunning themselves, in solitary style, across the concrete paths through the estate’s steeply-sloped rainforest.   There were, of course, humans, dozens and dozens of them, sunning themselves on the private sandy beach, nearly a mile long in all.

I went down to the Beach Club, where more lazed out of the hot rays, and took a 300-ft boardwalk to the spa. One of many charming young women in cream shirts tucked tightly into green and black batik trousers hands me the regulatory form (do you, women only, want to be pregnant?).

Indra, similarly dressed, appears and leads me onwards, along a metre-wide concrete path set two feet above the undergrowth, to a double cabin. Its long front wall is completely open to the wood deck, with wood rocking chair, looking into that Rousseau theatre (hope no bright parrots appear!). Just inside, a big white candle burns, near the floor-level black bathtub.

The two beds are covered in white linens.  I am asked to put on a sarong that matches Indra’s trousers, and the 90-minute treatment starts.  She is working with Uskincare, developed by Melbourne-based holistic disciples George Jilly, from Hungary, and his wife Jilly, a former nurse.  Afterwards Indra says she has been here six years, goes home every year: there are seven other Balinese here and she loves it. 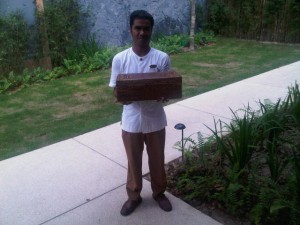 Laundry is returned, tissue-wrapped in a wicker basket

Lunch hour, girl.  Main choices – including the beach itself – are the Beach Café, the Dining Room, a Thai restaurant and the Guili, reopening next month for local fare.  Top chef Conny Andersson has Cornwall’s fish specialist Rick Stein coming to guest-chef in April, and that global Swiss charmer with the patterned bow tie, Anton Mosimann, will make a return visit in September.

At all times, however, the food is impressive.  Today it was lunch on the Dining Room terrace, at a shell-topped table decorated with living wheat grass.  Thanks to the German baker, the breads are yummy, as are Simply greens, a composed salad with cubes of avocado and papaya and a citrus-basil dressing, and Fettucine with wild mushrooms, roasted whole garlic, baby spinach and a black pepper cream.

Next time here, I vow to take a Thai cooking class. My butler Syed is sad I have not done it this time – he is a contented fellow, with 16 years’ tenure here – he travels every two weeks to his Kuala Lumpur home, where his Balinese wife, who worked in the spa here, lives with their two kids. 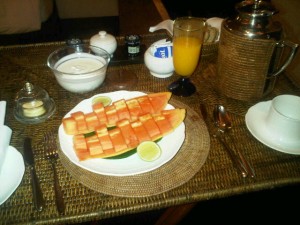 Once again I leave early in the morning, pre-dawn (ever-thoughtful GM Anthony Sebastian personally took my room service breakfast order and it arrived absolutely ‘on the dot’). Having checked the room for Gostelow gear (it is so annoying to leave things behind) I activated the Blinds button.  All eight blinds around my personal space in Beach Villa one slowly rose.

The windows outside instantly became a-flutter of moths, attracted to the light.  Ready to go, I pressed the Master button so all internal lights went off – and the moths departed, as if programmed.  This has, indeed, be a nature-full stay.