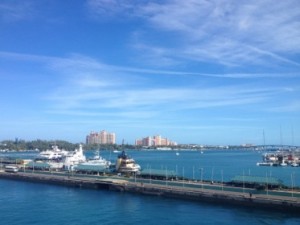 Looking across to Atlantis

Every top world city should have an icon, be it New York’s Statue of Liberty, the Eiffel Tower of Paris or the Tower of London. Yes, one world city even has a luxury hotel as its logo – the Burj Al Arab that has helped to elevate Dubai to a top world city. Singapore, says the gal, might say that its E-shaped, standing-on-its-legs Marina Bay Sands is also the icon of its city-state. And here on New Providence Island, in the Bahamas, the 24-floor Atlantis, built in 1998, is probably the main image that springs to mind. 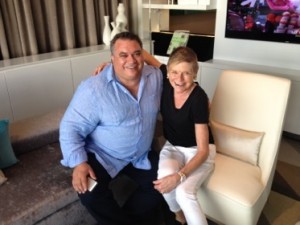 But Atlantis, jointly owned by a Canadian company and a Dubai-based company, will have big competition as of sometime in the middle of 2015, when the mighty Baha Mar mega-complex opens at the other end of the island. As I found when I toured Baha Mar a few months ago, whereas Atlantis, with its 1,201 bedrooms, is a family resort that also appeals to adults-only, Baha Mar‘s five hotels will be mainly adults, with facilities for families. One of the Baha Mar hotels will be the 200-room Rosewood, run by my good friend Luis Fernandes, who braved the vendors and taxis around Nassau Port to come and pick me up from Silver Cloud.

As I found with Christian Sauleau only yesterday in Fort Lauderdale, Luis Fernandes also truly understands luxury. This seems to be, indeed, a voyage of discovery, namely learning more about luxury. Luis Fernandes already has 40 team members of the forthcoming Rosewood Baha Mar working in other Rosewoods around the world, spending four months of immersion in Rosewood culture, to be blended with Bahamian exuberance. He wants to be able to walk around his hotel, when it opens, and find something has been done just before he himself thought of it. We were talking in Baha Mar’s only already-open hotel, Meliá Baha Mar, where restaurants have now been redone. The Mexican restaurant looks vaguely Italian, with giant taupe-coloured ceramic eyes. 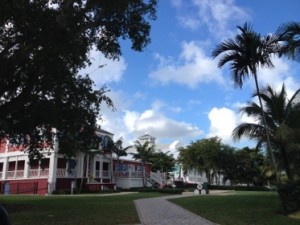 There is something to look at everywhere, it seems, on this island. Luis Fernandes drove me past another of the existing luxury hotels, Graycliff, owned by Enrico Garzaroli, whose father ran a stocking factory in Como (little Enrico obviously foresaw the demise of Italy’s hosiery industry so he headed for hotels, and here). He has a cigar factory, one of the Caribbean’s best wine cellars and now he hopes to turn the small streets immediately around Graycliff Hotel into a pedestrianised shopping venue.