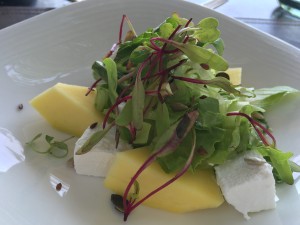 There are many reasons why Singita Ebony Lodge, in Sabi Sand Reserve, South Africa, is so supreme, says the gal. The locale is matched by the product, the carefully-thought out villas, 12 of them and all so private. The food, eat what you want anywhere, any time, is frankly outstanding. And another important element is that all senior management come from such highly regarded luxury hotels as Cape Grace and Ellerman House, both in Cape Town. Tom Rutherford, GM of this Lodge and its nearby sibling, Boulders Lodge, knows what real luxury is, as do his team. The guides are brilliant at finding the animals you want. 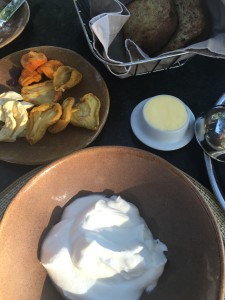 The chefs do whatever kind of food you prefer – your name might be printed on the menu, with up to five choices for each course. Look at my tipitapa fish and butternut-squash ‘chips‘, above. Look at the mango salad, also above. I never got round to desserts, alas. It is easy to eat like an elephant here (on which tack do look at the elephant video below). But you do not. You choose which terrace of the main lodge, cantilevered out over the Sand river, delights you most: a London-based French family of four switched to my terrace as the one they initially chose has a tree coming out of it which is regarded by a vervet monkey as its territory, and it managed to steal both a real linen napkin and some bread before they moved. Breads, by the way, are divine, as is everything (china is all Villeroy & Boch, and peppermills are wood Peugeots). You want for nothing here. 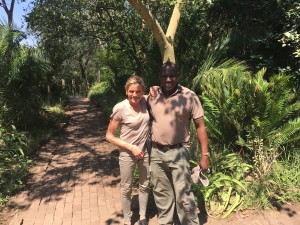 As many do, I dined with my guide Sipho, who told me how he originally wanted to teach but got diverted, thanks to a kind uncle, in learning about guiding. Guiding school taught him the rudiments, but after that it is learning on the job, he says. Like all the 340 people working between the two lodges here, he is on duty seven days a week for six weeks, and then he has two weeks off, to go home and see his own children. Dinner ended, and my glass of Billy Hughes’ Hughes Family Nativo Red Blend 2009 (poured from a big carafe) was finished. 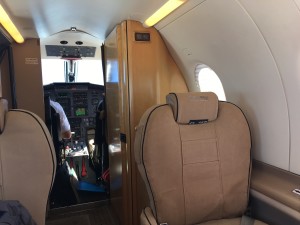 The return flight, in lonely state

I was escorted home by a guard with a torch – no-one is allowed to wander alone, in the dark. And then, far too soon, tomorrow’s sun came up and it was time to pack (soft bag only, I had left my trusted Porsche Rimowa at FedAir back at Johannesburg’s O.R. Tambo airport private jet terminal). Come on, I said to Sipho, after I had had an outstanding breakfast (how do they manage such perfect Greek yoghurt in such a place?), come on, photo time, but unfortunately, as you can see from the result, his camouflage is pretty good, which is one of the many reasons he is such an outstanding guide. Those who had been on the sunrise drive were just coming back. Having arrived in a full 19-seater Raytheon Beech 1900, this time FedAir sent an eight-seat Pilatus PC12. It was, I kid you not, my own private plane, me and pilot Richard. And, you will never believe this, a leopard lay sleeping by the thatched hut that is Singita airport terminal. What other luxury hotel can offer that?