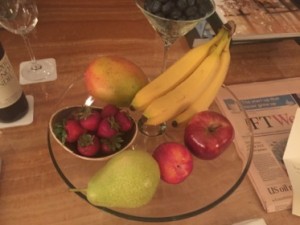 What does anyone want after a flight? It is very basic. A warm welcome and to be taken to your room – and of course the room is ready, that is taken for granted. There, in what is now your temporary home, someone has thought of YOU. One luxury hotel that knows how to do it right is Peninsula New York. Specially laid out for the gal is a selection of her favourite fruits – how did they know? They are whole rather than cut up, and each fruit is in perfect condition, just right for eating now. Of course there is plenty of water, and, how nice, a bottle of Ridge Zinfandel. Apparently the clever people here have asked sibling hotels around the world what this guest likes. 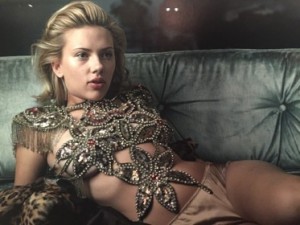 Scarlett Johansson in the lower lobby

I also like art, particularly art that changes every time I come. Peninsula New York works with Circa 1881, an initiative, organised by Alvaro Leal, that encourages private collectors temporarily to loan pieces to hotels, and public places. This is Annie Leibovitz’s 2004 photograph of Scarlett Johansson – I immediately think of that star’s stay at a Tokyo hotel during the filming of Lost In Translation, which still benefits that particular hotel many years later. I think stunning art has a similar, though more niched, effect. There are several likenesses of women around this 235-room hotel: outside the E 55th-street entrance to its Salon de Ning salon are two Old Shanghai beauties. In October a giant Grimanesa Amorós bespoke illumination, for breast cancer awareness, will be on the hotel’s exterior. 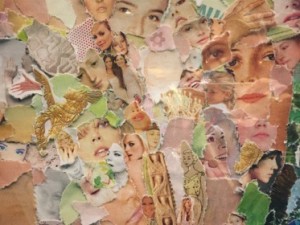 After the Bath, by the Gotham Lounge

On the temporary art side there is also this collage, After the Bath, After Degas, a 2011 work by the Brazilian artist Viz Muniz. This one is set at the entrance to the gorgeous Gotham Lounge, mezzanine level above the lobby. As I arrived a scavenger hunt was taking place, with young, like juvenile, hotel guests trying to find set things around the hotel. This is a hotel for doing things, experiences par excellence. Its Peninsula Academy offerings include helicoptering to see an oyster farm on Long Island, and private visits to Broadway back-of-stage, picnics in Central Park, MOMA out of hours and the best-selling – including for hen parties – visits to a NYFD fire station. In December it converts five existing bedrooms to one 2,500 sq ft Fifth Avenue Suite, one bedroom with a giant salon and closet big enough for all the shopping you will probably do in New York. 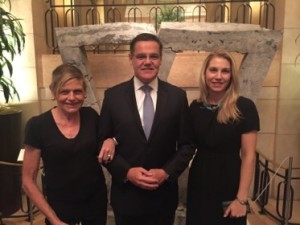 After that retail therapy, it is a good idea to head to the luxury hotel‘s Alexandra Champalimaud-designed spa for a Biologique Récherché or ESPA treatment, or Ayurvedic by Sattva, formulated by Farida Irani. I had an amazing hour-long Sattva scrub, preceded by a foot bath. The scrub was with pink Himalayan crystal salts blended with fragonia,, limbu and tulasi, all of which was set to help circulation and minimize cellulite (hey, what’s zat?). I sure felt fabulous, anyway. How else to feel better here? Climb 36 silk-smooth wooden stairs further on up from the spa, to the rooftop, to wear Beats by Dr Dre wireless headphones – on loan here at the hotel, free during your stay – as you work out in the LifeFitness gym. Which is what I did, the moment it opened at 5.30 a.m. before attacking my divine fruit bowl, with a cup of great espresso (I also had a Cuisinart filter machine: two coffee makers is real luxury). And then it was time to leave. The BMW, Peninsula green of course, and WiFi-enabled, was driven by a man from Mali. Oh boy. He put his own music on and it was Ali Farka Touré and the blind couple, Amadou & Mariam, all the way. Wish that journey had gone on for hours.