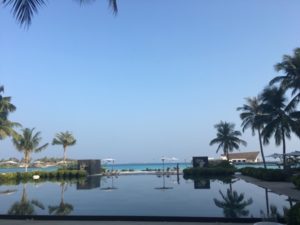 Looking out over pool

Well, the gal is used to splendid welcomes but how about THIS, above? This is the team at what many say is the Maldives’ top luxury resort, Le Cheval Blanc Randheli Island, gathered together on the dock as they are every time someone arrives, by speedboat or by seaplane. There was the marvellous and passionate GM, Renato Chizzola, the Austrian-Italian who after years at sea, culminating in running The World, decided that land, or at least an island, was next on the agenda. (Randheli, by the way, is one island connected by boardwalk to two man-made islands, Medhudheli and Fahudheli, and two other man-mades, reached only by boat, hold the spa and the owner’s villa.) 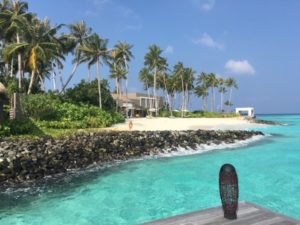 This is the one Le Cheval Blanc Maison, as the company calls each hotel, that is owned by someone else, in this case a wealthy individual who loves anonymity as well as style. There are 45 ‘normal’ villas, each at least 2,000 sq ft – see the video below for a tour of my divine villa 19, south-facing on Medhudheli, a cathedral-high space that can be divided into three by pivoting ceiling-fixed vertical panels, the whole a theatre that is so well equipped that among the 70-plus ‘amenities’ were three types of slippers and three pots of sybaritically addictive bath salts. The owner’s villa, as you would expect, is something else, 10,000 sq ft, four bedrooms, two floors, and, 100 feet away, a separate villa for guests, or your maid (see the second video, below). 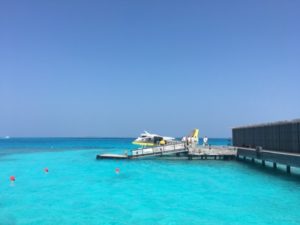 The hotel’s private seaplane is, appropriately, taupe and bright yellow

Linens everywhere are Garnier-Thiebaut, just as china is all Bernardaud. The entire play is international luxury with more than a hint of France, from the Guerlain spa and Island Chic fragrance by Dior to Veuve Clicquot. But this is also global, with Zassenhaus salt and pepper mills and Cloudy Bay Pinot Noir. We drank that, after sake, at Diptyque, a clever indoor-out two-sided restaurant, one Japanese, one pan-Asian. I drank water at lunch at Deelani, the Italian restaurant cantilevered over the water at the end of the arrival dock: as I savoured the just-caught white snapper with Mediterranean vegetables I looked across the water to lucky people just arriving, in the hotel’s own Twin Otter. Cleverly, the hotel leases the plane from TMA, and it only flies point to point (plebs going to other resorts never know until they board how many hops a TMA seaplane will take – one day it took me four hops, and a total of five hours, to get from one resort to another). See how this plane is branded in CB colours. 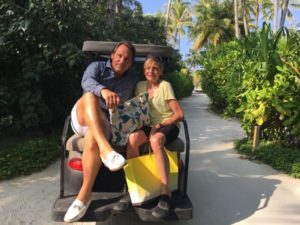 Company-wide, Le Cheval Blanc is an understated taupe, but each Maison has its own overlay. Here at Le Cheval Blanc Randheli Island the colour is a bright yellow, with a hint of green: it shows in art, in paper collateral, the edges of the taupe notepad sheets and even the pen, which has a clear shaft filled with sand (the breakfast menu cover is similar). Designers Camilla Franks and Vanessa Brisson have put this signifier colour, brighter even than Van Gogh’s, into fashion gear for the 330 team members, from hat bands to tops, and even the earphones in the Citterio-Technogym are what I shall now call Randheli yellow. The difference, of course, is that here at this divine luxury resort the yellow complements the unbelievable blues and greens of water and sky, while poor old painter Vincent was born in Zundert at the end of what was probably a rather-grey winter. NOW SEE FIRST MY VILLA AND, BELOW, THE OWNER’S VILLA