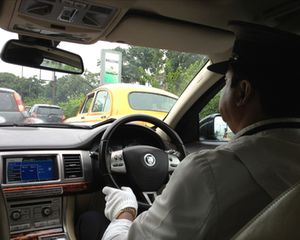 Oh what a difference good music makes to worthwhile travel.  Most of the time the gal would rather have no music at all, to allow natural sounds to enter the memory – but when really good music is provided, a luxury hotel benefits.  The arrival car of Taj Bengal, Kolkata, sets the tone here.  Of course the car is a Jaguar (though it could have been a Land Rover or even, as inverted snobbery, a Nano). Anyway, this car has everything, a highly-skilled driver to navigate through Calcutta’s appalling solid traffic, water and moist towels, newspapers and magazines, a hotel notepad and pencil, and great-tone classical music. 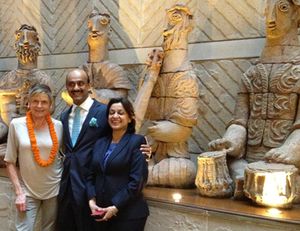 Mohan and Seema Mohanchandran in front of musician statues…

There is art throughout the main floor lobby of this monumental hotel.  One strategic piece is five terracotta musicians by local sculptor Shayamal Roy – he is a local artist who has diverted into sculpting, and I also loved his dog, or perhaps another animal (but let us call it a dog, some kind of mongrel) also in the hotel’s collection. I had last seen Mohan (K. Mohanchandran, GM of this 229-room hotel) when he was running Blue, in Sydney. His wife Seema has somehow managed to delay a flight on to Mumbai so she can be in the photo with us. Snap snap and she is off.  Three hours later, after dinner, I find a hard copy of this photo, in a paper frame, waiting in suite 524. 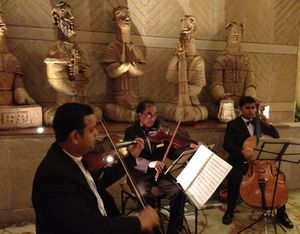 .. which is later backcloth to Calcutta School of Music players

Anyway, up in suite 524 I look out, down over the zoo, and, first things first, read the International Herald Tribune – and wish yet again that it should be industry standard somehow to provide an international right-language newspaper as a welcome. I unpack the Porsche Rimowa – perhaps Jaguar will also go into luggage? – and head down for a good work out.  Back down in the lobby, there are actual musicians in front of the Shayamal Roy.  Much to its credit, this hotel, plus Kolkata’s other three luxury hotels, sponsor the Calcutta School of Music, which provides instruments and an annual teacher, from Germany, in an effort to keep alive a tradition for fine music that might otherwise sadly die out. (The School was set up in 1915 by Dr Phillipé Sandré and its conductor is Sanjib Mandal.) 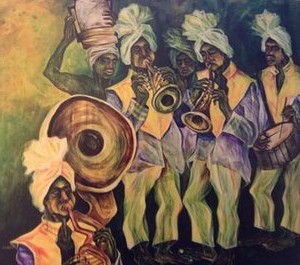 This hotel is so much part of the community. It was they who introduced me to Calcutta Walks. They work with a local upcycling family, turning old bedlinens into super-stuff to sell on.  Learning about this is ideal timing as on September 23rd, 2013, green champion Livia Firth, wife of Colin Firth, unveils a green fashion collection with items by such designers as two of my own fashion heroes, Victoria Beckham and Christopher Bailey of Burberry (the collection will be exclusively sold via Net-a-Porter, with 20% of proceeds going to Bono’s RED, to eliminate HIV in Africa). Every day, too, Taj Bengal’s Executive Chef Sujan Mukherjee and his team send about 20 kilos of food to the Mother Teresa foundation. 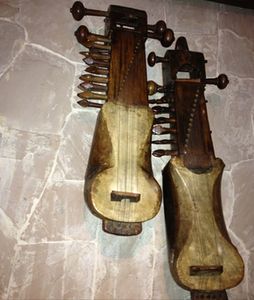 A pair of sarangi

Ah food. You can eat Arabic, Chinese, Indian, international and Italian here – or spend a long evening merely drinking and snacking in the highly-popular The Junction bar, a real pub with television, cigar section, railway souvenirs and pictures and, some evenings, live music.  I walk past that, looking at more of the art collection. One fascinates, an acrylic of a local events band by Shekhar Roy, I think no relation. They are probably playing at a wedding, when musicians are always male.  They have lots of weddings here, up to a thousand at a time, on dates decreed auspicious by Hindu priests. 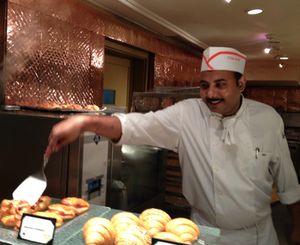 A breakfast chef, classical music as accompaniment, enthuses about his croissants

Outside the Indian restaurant, Sonangaon, hang two chunky string instruments called sarangi, Sanskrit for saar, summary, and ang, form, meaning that in their Gandarbha heritage they could be used for any kind of music. Sonangaon is highly themed, like a mud-wall house, complete with a big well. It serves Northwest Frontier tandoori kebabs and Bengal’s Jomidari food, influenced by Raj, Muslim cuisines and Partition, food culture of royal houses of Bardhaman, Coochbehar and Murshidabad.  In this section you find Beckti chicken wrapped in a banana leaf, and fried, perhaps served with a Palongshaager chochchori, spinach and other vegetables cooked to a mélange. I see more local dishes at breakfast, where the buffet is exactly labeled to offer a real insight into what Bengalis might go for, say Idli, a steamed round of fermented rice eaten with sauces they call chutney, perhaps coconut (I saw an antique coconut grater last night, a tortuous wooden contraption that you put your foot on, for leverage as you turn a coconut against a serrated wheel).  Breakfast is enlivened, as are trips in the three elevators, by fabulous music – the master of the mansion, Mohanchandran, tells me that music, anything but pop, is supplied every three months by a genius called Arnaud Azzouz, who also feeds Taj Falaknuma Palace, outside Hyderabad, plus Rambagh Palace, Jaipur, and some areas of Taj Mahal, New Delhi, and Taj Lands End, Mumbai.  Gosh, I am learning so much. The Concierge, David Aaron, explains how he is helping people, usually from the UK, to trace graves and records of ancestors from the time when Calcutta was capital of British India. One couple recently discovered graves of four family members – his great-grandfather was Lieutenant Governor of Bengal 1882 to 1887, and that man’s grandfather was secretary to Warren Hastings.  Ancestor-seekers, genealogists and amateur historians are in for a field day here, with lots of music into the bargain.