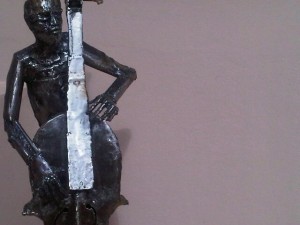 The statues of musicians on an outside staircase at Four Seasons Hotel Marrakech make a gal smile, which you need from time to time when trying to find your way around a four-floor straight building with two arms coming out along one side.

To get from room 321 to the gyms (there are two) you take one walkway, go down two flights of stone stairs, turn right and right and right again, find yourself outside and go left and left and left again.  Phew.  After such an exercise you barely need the struggle of the wave machine – better to stay ‘home’ and do more stair climbing. 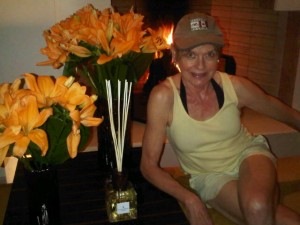 This is a gracious hotel, sand-coloured and deliberately minimal, with discreet signage and strategic local photographs as decoration.There is warmth, thanks to designers GA International, via the working fireplaces in the front lobby and in the sand-light library that beckons with a cleverly chosen selection of hard-back tomes of Morocco, Berber culture, the Medina and so much else.

A gal could while away many hours here, reading and so on.  But the outside, a 30-acre oasis of mature palms and lush greenery, and two pools (one adult-only), and two clay tennis courts…. oh so much to do.  In summer there is even a rooftop bar, and of course the spa. 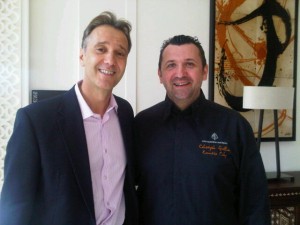 A pianist (left) and a composer, also known as GM Jean-Claude Wietzel and Chef Christophe Gillino

You feel Marrakech today, in this hotel.  This is not the claustrophobia and dark colours of yesteryear.  This is space and creativity. I opened the big sliding door on to my very-private terrace this morning, before the sun came up, for a few stretches. Later, at dawn, I realised the sand colour of my marble floor and rug matches the ragged walls and leather headboard. I realised, too, what a real ‘soaking’ tub is: my bathtub is almost three feet deep. 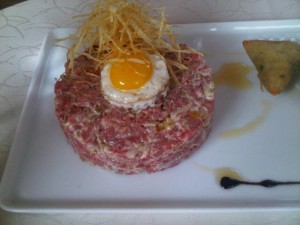 You know you are in Marrakech, too, looking at the breakfast buffet in Solano. Red earthenware pots with tall conical lids hold, for instance, flat pancakes, to go with honey. Nearby is a stack of dates. You feel like singing at the array of fruits, including juiciest peaches the size of tennis balls.

Actually the hotel, like Marrakech, is full of music.  It is run by Jean-Claude Wietzel, who as a young boy in Nice studied the piano for nine years at Nice Music Conservatory (since he also played golf and tennis, and ran, and kicked balls around and windsurfed and skied, one wonders how he had time to study proper things).  He still loves to play, but he needs a piano. 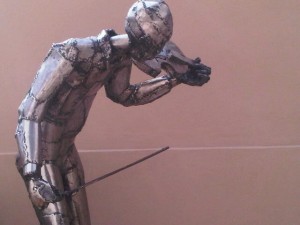 And how about the chef! Christophe Gillino, another Frenchman – from Aix en Provence, this time – works professionally as Chris Milano.  He is under contract to EMI as a composer, though he does sometime sing, too.

His last album, Sounds from the Desert, inspired by Oriental music he had heard during previous years at the stoves in Four Seasons Hotel Cairo Nile Plaza, was released this June 16th, the very day of the opening of Four Seasons Hotel Marrakech.

Composing music is really not so different from working on menus and creating dishes, Chris says.  He wants to indulge the senses.  When you get the balance right, the results can be captivating.  Look what he does with a beef tartare. As the car pulled away, on departure, I realised there was only one thing missing.  That piano.